With more and more councils doing as they were told and opening up their spending data in the name of transparency, it’s maybe worth a quick review of how the data is currently being made available.

To start with, I’m going to consider the Isle of Wight Council’s data, which was opened up earlier this week. The first data release can be found (though not easily?!) as a pair of Excel spreadsheets, both of which are just over 1 MB large, at http://www.iwight.com/council/transparency/ (This URL reminds me that it might be time to review my post on “Top Level” URL Conventions in Local Council Open Data Websites!)

The data has also been released via Spikes Cavell at Spotlight on Spend: Isle of Wight.

The Spotlight on Spend site offers a hierarchical table based view of the data; value add comes from the ability to compare spend with national averages and that of other councils. Links are also provided to monthly datasets available as a CSV download.

Uploading these datasets to Google Fusion tables shows the following columns are included in the CSV files available from Spotlight on Spend (click through the image to see the data):

Note that the Expense Area column appears to be empty, and “clumped” transaction dates use? Also note that each row, column and cell is commentable upon…

The Excel spreadsheets on the Isle of Wight Council website are a little more complete – here’s the data in Google Fusion tables again (click through the image to see the data):

(It would maybe worth comparing these columns with those identified as Mandatory or Desirable in the Local Spending Data Guidance? A comparison with the format the esd use for their Linked Data cross-council local spending data demo might also be interesting?)

Note that because the Excel files on the Isle of Wight Council were larger than the 1MB size limit on XLS spreadsheet uploads to Google Fusion Tables, I had to open the spreadsheets in Excel and then export them as CSV documents. (Google Fusion Tables accepts CSV uploads for files up to 100MB.) So if you’re writing an open data sabotage manual, this maybe something worth bearing in mind (i.e. publish data in very large Excel spreadsheets)!

It’s also worth noting that if different councils use similar column headings and CSV file formats, and include a column stating the name of the council, it should be trivial to upload all their data to a common Google Fusion Table allowing comparisons to be made across councils, contractors with similar names to be identified across councils, and so on… (i.e. Google Fusion tables would probably let you do as much as Spotlight on Spend, though in a rather clunkier interface… but then again, I think there is a fusion table API…?;-)

Although the data hasn’t appeared there yet, I’m sure it won’t be long before it’s made available on OpenlyLocal:

However, the Isle of Wight’s hyperlocal news site, Ventnorblog teamed up with a local developer to revise Adrian Short’s Armchair Auditor code and released the OnTheWIght Armchair Auditor site: 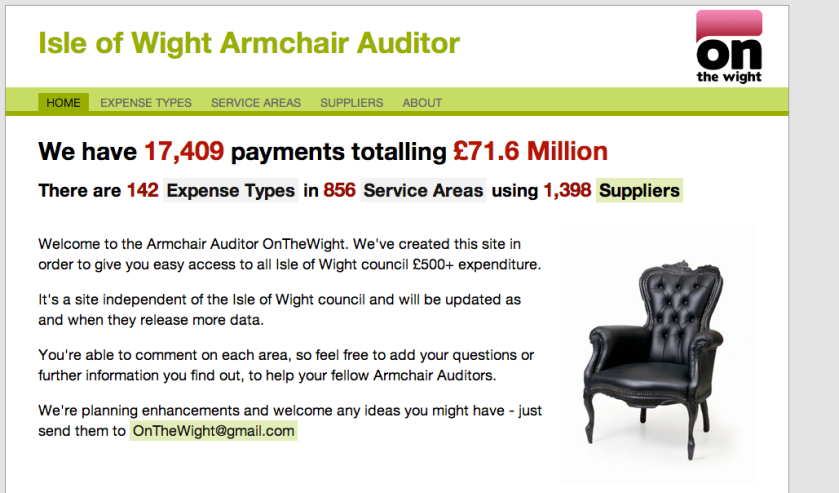 So that’s a round up of where the data is, and how it’s presented. If I get a chance, the next step is to:
– compare the offerings with each other in more detail, e.g. the columns each view provides;
– compare the offerings with the guidance on release of council spending data;
– see what interesting Google Fusion table views we can come up with as “top level” reports on the Isle of Wight data;
– explore the extent to which Google Fusion Tables can be used to aggregate and compare data from across different councils.

PPS for a list of local councils and the data they have released, see Guardian datastore: Local council spending over £500, OpenlyLocal Council Spending Dashboard

3 thoughts on “Getting Started With Local Council Spending Data”