A couple of weeks ago, a couple of tweets (maybe RTs of @ODIgovuk?) alerted me to the release of the ODI (HMG’s Office for Disability Issues) (flash based – how accessible is that?!*) accessible media player (see the player), which “supports customisable subtitles, audio description, British Sign Language, downloadable PDF transcripts”. In support of its credentials, the host website sports the RNIB’s Surf Right badge of approval. 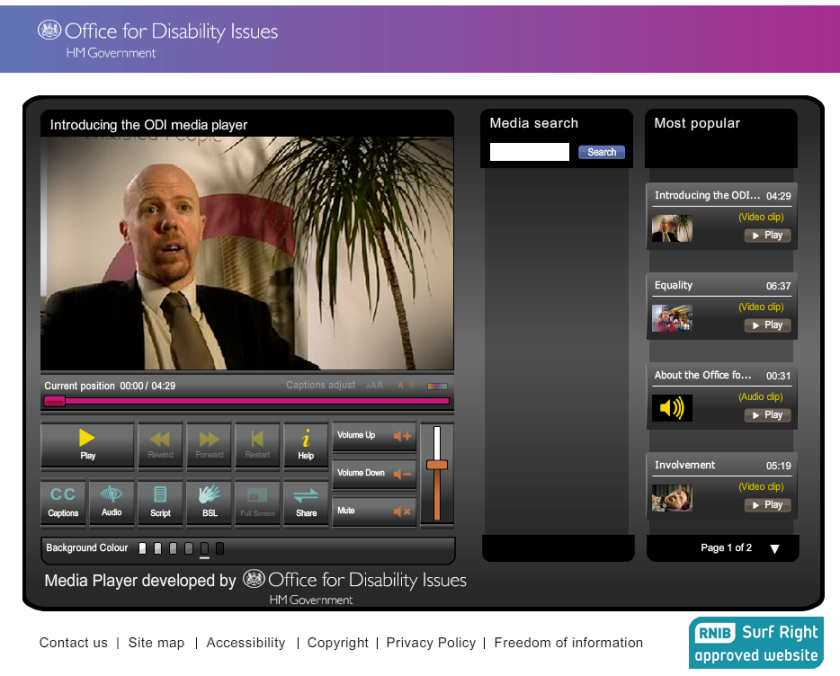 *Ah: “Built in Flash, it provides full keyboard support for people who can’t use a mouse, is extremely well labelled, making all of it’s functions clear to screen reader users, and for those who don’t have Flash in their browsers, provides the same information in alternative formats.”

On hearing the announcement, my first thought was to ask whether or not anyone had let JISC know, for example by sending a press release at least to JISC TechDis, JISC’s advisory service on technology and inclusion, but I think that was probably taking the hope of joined-up-ness a step too far…;-)

I’ve not had a chance to play with the ODI player probably yet, nor am I sure what I should look for in terms of what makes this a properly accessible media player, so if you know of a review anywhere, please add a link in the comments…

Anyway, today, at the bottom of post (Are waterfalls agile?) from Will Woods, one of the few “in-the-loop” folk in the OU who seems to blog hints at least about planned OU tech innovation, I saw this:

We’ve just started a venture to develop the OU Media Player for example which is going to create ‘the worlds’ most accessible media player’. It’s built using existing services but we’ll add the value to make it provide captioning and accessibility services and to link to all OU media materials on a variety of platforms including the VLE. This is a very small team working over the next five months in an agile way. I’ve got 100% confidence in it’s success because it’s a great team, everyone understands how important it is tot he OU and they’re being given the freedom to build it iteratively, creatively and well, i.e. serving the OU’s mission in being “open and accessible”.

PS Will’s post also picks up on a recent Computer Weekly interview with new OU CIO David Matthewman, which I don’t think I’ve blogged a link to before, but is worth a read. No mention of a skunkworks team I heard mooted at one point, though… unlike the “right to skunkworks” teams that the Cabinet Office seems keen to chase: Cabinet Offfice Structural Reform Plan Monthly Implementation Update, January 2001 [pdf]: “1.12(v) Announce new open standards and procurement rules for ICT, including right for skunk works to be involved prior to launch of procurement [Not complete]”

PPS This post got me thinking, trivially, about the accessibility of the iPad: my gut reaction, lack of tactile feedback might make it inaccessible… Apparently not – see for example the RNIB media release when the iPad first came out. Folks in IET at the OU apparently also did a favourable evaluation review (hence (as @liamgh put it) the OU mention in this iPad advert?), though I’m not sure it’s on the web anywhere… (Thinks: with the OU taking on various national roles, might the release/publication of accessibility reviews (aka accessibility consumer reports?) relating to new technology, particularly in an educational context, be an appropriate Big Society kind of thing to do?;-)

6 thoughts on “The “Most Accessible Media Player on the Web”?”