From what I can tell, Chris has been running round Southampton grabbing data from wheresoever he can get it, so it’ll be interesting to see how the datasets grow out over the coming months;-)

Here’s how I think part of the data looks at the moment?

A full list of datasets can be found here.

I wonder if it would be useful if each institution publishing Linked Open Data published an authoritative, local-to-them version of the Linked Open Data Cloud Diagram showing the local datasets and the third party datasets that are directly linked to? As well as the diagram, a data representation of the diagram (e.g. a Graphviz .dot file, would be handy…)

As a quick way in to writing your own queries on the Southampton open data SPARQL endpoint, previews of the queries used to generate results pages in the data store are also provided: 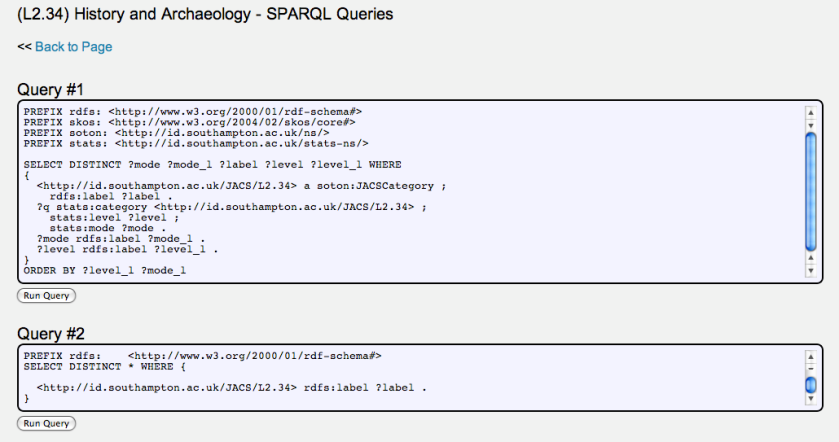 A couple of quick observations about the data:

The organisation data looks quite flat at the moment, but I wonder if more structure will become available over time, allowing an organogram for the university to be generated directly from this data? Whenever I see an organisational chart (such as the Soton Corporate Servies organisation chart, I can’t help feeling it should be generated from an underlying data description, rather than simply presented as a flat image, with the underlying data published alongside the chart, or progressively enhanced to display the chart?) Given the general crapness of institutional search engines, surely we should be able to find a way of using organisational structure and committee workflows to help surface relevant content to folk at a particular location in the organisation/workflow?

The academic/course data is quite thin at the moment, but provides really important piece of scaffolding for linking to ever richer course related content, as well as linking out through services like UCAS. [UPDATE: by the by, @scottbw just created and shared an RDF XCRI vocabulary for course descriptions, for use with this MLO RDFS (I have no idea what any of that means, either;-).]

In the same way that getting access to postcode data and its various associations was foundational for the development of many location based services in the UK, so access to course code data for building course level applications is key.

I thought it was particularly interesting to see a link from courses to data obtained and remodelled from the Unistats service: 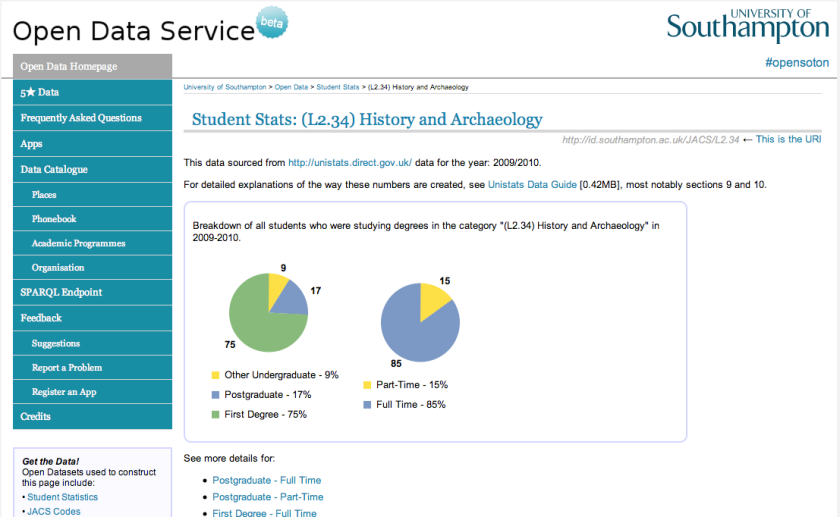 As well as the Southampton open data store, the OU is also running a 5 star linked open data service at data.open.ac.uk for OU Linked data, which is currently exposing module information and data around OU podcasts (OU Linked data on OUseful.info). I think location data is also in the store, though not publicly avalaible yet???

One thing that excites me about the opening up of data across sites is the extent to which institutions will start to open up different datasets to other HEIs, and hopefully drive the wider roll out of data as a result as everybody sees what everyone else is opening up… The other thing that excites is being able to join datasets;-)

So, which university will be next?