A quick lunchtime post on some thoughts around constructing corporate graphs around OpenCorporates data. To ground it, consider a search for “tesco” run on gb registered companies via the OpenCorporates reconciliation API.

Some or all of these companies may or may not be part of the same corporate group. (That is, there may be companies in that list with Tesco in the name that are not part of the group of companies associated with a major UK supermarket.)

If we treat the companies returned in that list as one class of nodes in a graph, we can start to construct a range of graphs that demonstrate linkage between companies based on a variety of factors. For example, a matching address for a registered, post off box mediated, address in an offshore tax haven suggests there may be a weak tie at least between companies:

(Alternatively, we might construct bipartite graphs containing company nodes and address nodes, for example, then collapse the graph about common addresses.)

Shared directors would be another source of linkage, although at the moment, I don’t think OpenCorporates publishes directors associated with UK companies (I suspect that data is still commercially licensed?). However, there is associated information available in the OpenCorporates database already…. For example, if we look at the various company filings, we can pick up records relating to director appointments and terminations? 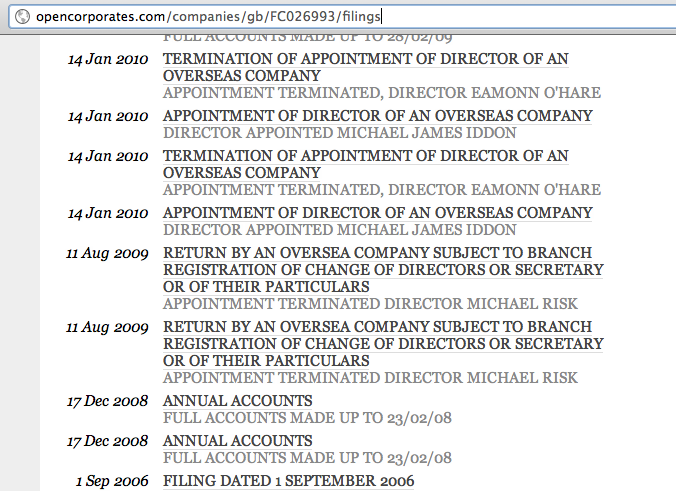 By monitoring filings, we can then start to build up a record of directorial involvement with companies? From looking at the filings, it also suggests that it would make sense to record commencement and cessation dates for directorial appointments…

There may also be weak secondary evidence linking companies. For example, two companies that file trademarks using the same agent have a weak tie through that agent. (Of course, that agent may be acting for two completely independent companies.)

If we weight edges between nodes according to the perceived strength of a tie and then lay out the graph in a way that is sensitive to the number of weight of edge connections between company nodes, we may be able to start mapping out the corporate structure of these large, distributed corporations, either in network map terms, or maybe by mapping geolocated nodes based on registered addresses; and then we can start asking questions about why these distributed corporate entities are structured the way they are…

One thought on “Tesco Graph Hunting on OpenCorporates”