Although a wealth of public data sets are being made available by government departments and local bodies, it can often be hard to track down. Data.gov.uk maintains an index of a wide variety of publicly released datasets, and more can be found via data released under FOI requests, either made through WhatDoTheyKnow or via a web search of government websites for FOI disclosure logs. But now it seems that interest may be picking up in making data available in more palatable ways…

Take for example datagenerator, “an online service designed to help individuals and businesses in the creative sector to access the latest industry research and analysis” operated by Creative & Cultural Skills, the sector skills council for the UK’s creative and cultural industries:

This tool allows you search through – and select – data from a variety of sources and generate a range of tabulated data reports, or visual charts based on the datasets you have selected. It’ll be interesting to see whether or note this promotes uptake/use of the data made available via the service? That is, maybe the first step towards uptake of data at scale (rather than by developers for app development, for example), is the provision of tools that allow the creation of reports and dashboards?

If the datagenerator approach is successful, I wonder if it would help with uptake of data and research made available via the DCMS CASE programme?

Or how about OpenDataComminites, which is trying to make Linked Data published via DCLG a little more palatable.

There’s still a little way to go before this becomes widely used though, I suspect?

But it’s a good start, and just needs some way of allowing folk to share more useful queries now and maybe hide them under a description of what sorts of result they (are supposed to?!) return.

As the recent National Audit Office report on Implementing Transparency reminds us, the UK Government’s transparency agenda is driving the release of public data not only for the purposes of increased accountability and improving services, but also with the intention of unlocking or realising value associated with datasets generated or held by public bodies. In this respect, it is interesting to see how data sets are also being used to power services at a local level, improving service provision for citizens at the same time.

In Putting Public Open Data to Work…?, I reviewed several data related services built on top of data released at a local level that might also provide the basis for a destination site at a national level based on a aggregation of the locally produced data. Two problems immediately come to mind in this respect. Firstly, identifying where (or indeed, if) the local data can be found; secondly, normalising the data. Even if 10 councils nominally publish the same sort of dataset, it’s likely that the data will be formatted or published in 11 or more different ways!

Another traffic related site shows how it may be possible to build a sustainable, national service on top of aggregated public data, offering benefits back to local councils as well as to members of the public: operated by Elgin, roadworks.org aggregates roadworks related data fom across the UK and makes it avaiable via a user facing site as well as an API.

The various Elgin articles provide an interesting starting point, I think, for anyone who’s considering building a service that may benefit local government service provision and citizens alike based around open data.

ELGIN is the trading name of Roadworks Information Limited, a new company established in 2011 to take over the stewardship of roadworks.org (formerly http://www.elgin.gov.uk).
ELGIN has been established specifically to realize the Government’s vision of opening up local transport data by December 2012 (see Prime Minister’s statement 7th July and the Chancellor’s Autumn statement November 2011.)

ELGIN is dedicated to preserving the free-to-view national roadworks portal and extending its range of Open Data services throughout the Intelligent Transport and software communities.

roadworks.org is a free-to-view web based information service which publishes current and planned roadworks fulfilling the requirements of members of the public wanting quick information on roadworks and providing a data rich environment for traffic management professionals and utility companies.

[ELGIN supports the roadworks.org local roadworks portal by the providing services to local authority and utility clients and through subscriptions from participating local authorities. Though a private company, ELGIN manages roadworks.org and adheres to public sector standards of governance and a commitment to free and open data.]

Our policies and development strategy are strongly influenced by our Subscribers and governed by a governance regime appropriate to our role serving the public sector.

We are committed to helping achieve better coordination of roadworks, and in working together with all stakeholders to realise the vision of open, accessible, timely and accurate roadworks information.

[ELGIN redistributes public sector information under the Open Government Licence and provides its added value aggregation and application services to industry via its easy to use API (Application Programme Interface).]

Another application I quite like is YourTaximeter, This service scrapes and interprets local regulations in a contextually meaningful way, in this case locally set Hackney Carriage (taxi) fares: 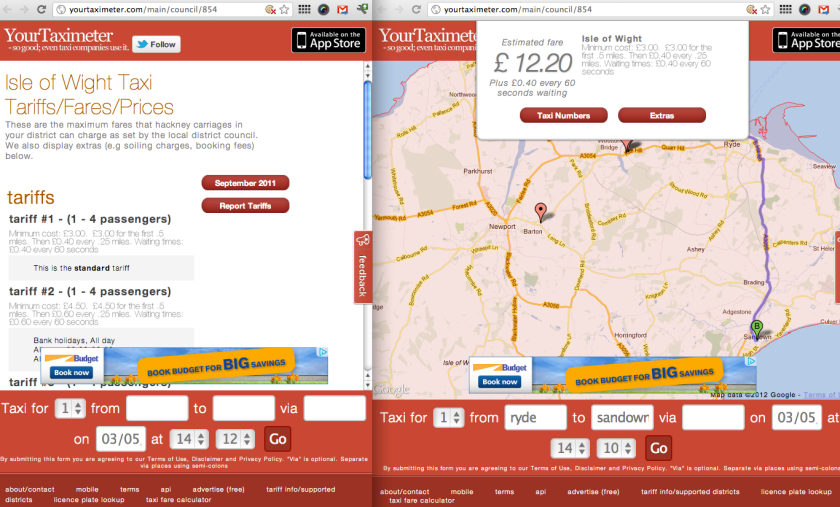 If you know of any other local data or local legislation powered apps that are out there, please feel free to add a link in the comments, and I’ll maybe do a round up of anything that turns up;-)