A glorious day – blue sky, nip of cold in air – and time to take the dog for our usual afternoon walk. Surprised by a voice from the hedgerow beside the field I was walking along, man and gun, taking out the pigeons. He ripped open the chest of one his prey – full to brimming of cabbage leaf (or brussels sprouts? Some sort of brassica, anyway). Apparently there’s a chap from the mainland who can ship them off to France, for paté… It seems as if there’s good night time shooting for rabbits, too… good sized rabbits, thick on the back. Taking them out now is better control than in the summer – leverage of a sort? (Get them *before* they breed, rather than after…)

A little further on, and I meet a couple of neighbours, coming the other way. Wellies. Wrapped up. They mention the next field along, the one I look over to the hill in the distance, the one that forms the countryside view, the one with the brassicas, at the moment (before, it was garlic), is up for demolition… Low quality agricultural land, apparently, which means it’s good for a solar farm. I’m determined not to be all NIMBY about this – we need to get our energy from somewhere – but it would have been nice to know. The consultation was a month or two back, apparently, with a local council consultation to boot too. Hmmm… maybe it was announced in the County Press and I missed it? Maybe I should read Ventnorblog OnTheWight more regularly, subscribe even, rather than rely on the serendipity of a passing tweet to refer me to it? AH, that was it – maybe it was while we were away, 13 days in Canada in mid-October…

Home from the walk – there’s been a faint, if lingering, aroma of gas on the Sandown Road, and I mention it to a chap tinkering with his car wiper blades. It’s outside his house. He agrees, said he’d thought something similar. Seems reluctant to act on it. “We had the same last year”, I say, “they came pretty quickly, fixed it, no real disturbance at all”. He turns away, with an aside: “maybe it’s because the central heating is on…?” Whatever… suspicion confirmed, if it’s not fixed by the weekend, I’ll phone it through. It’s no worse than it’s been – just heightened by the still cold air.

Back home… wondering about this planning application?, planning inquiry?, planning consultation? that passed me by. Google. wight newchurch solar planning, Search Tools Anytime limit to the past month.

Structured results… handy. But what does the top one give?

Presumably I need to Search All Planning Applications.

Thrown. I want to type “solar farm”. Search by ward, cmd-f (I’m on a Mac; ctrl-f if you’re on a Windows machine, no idea if you’re on a tablet…) and do an in-page search for sola:

That’s not right, is it. Remembering the local council page, they called it photovoltaic park, didn’t they? It would be churlish for me to say that this more precise phrasing is divisive, intended to throw the unwary off the scent… 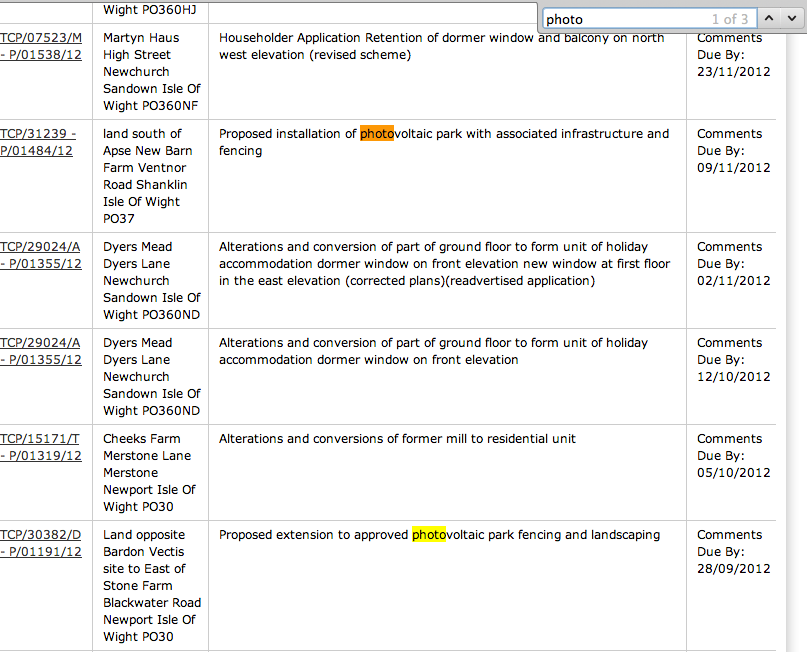 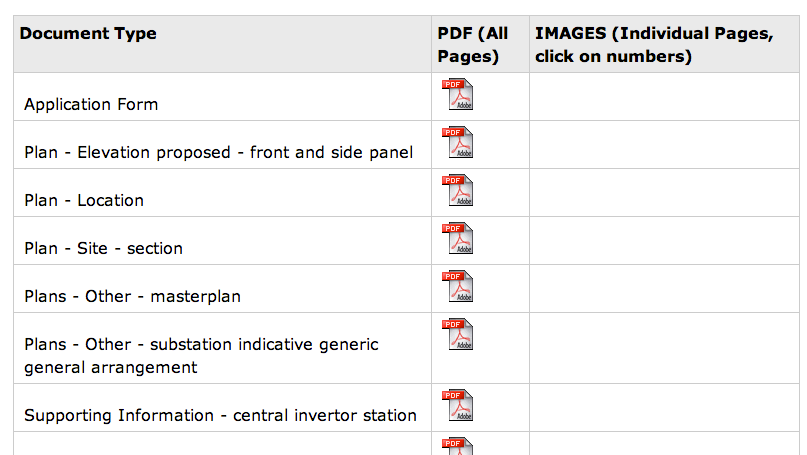 Tick and proceed. See the PDF, in this case. Thankfully, permissions appear to be set that let me see the rest of the documents without having to accept the click-wrap license conditions explicitly again.

Bit of a pain if you’re writing a scraper, though.

Other comments are similarly curtailed.

Back to the planning application. Fourteen documents. 14. A separate click for each.

I do not want to go all NIMBY about this. At least, not in a purely reactionary way. I want to be informed. So 14 clicks. If the land is up for grabs, then there are much worse possibilites than a solar farm photovoltaic park if a land-use change is allowed.

Okay. I’m still wary though. If the land is changed away from agricultural to whatever classification the solar farm photovoltaic park requires, if the solar farm photovoltaic park is not viable, or comes to the end of its life, presumably the site will by default become brownfield and easier to change in use again. Presumably there will be little, if any, possibility of reversion back to agricultural land? Seems I’m wrong.

There’ll have to be some sort of inverter, probably?

Here’s the path where I walk the dog alongside the intended solar farmed field.

Not so bad. And I can see how the land could still be grazeable. (How hot do the arrays get, I wonder? Fire risk? Burning sheep?!)

There’s a fence though…

The array may well generate an income, but it won’t provide work, other than in the construction phase.

How do these arrays cope with coastal rains, I wonder? Salty.

So… that’s the application… Seems…. okay… plausible… better than a housing estate or industrial units.

I’m not sure what points are raised in the comments – the few I tried to look at were curtailed. Is this the council actually helping the Nays? Public comments made available? Tick Ern – no… Null and void. Procedural error. Reapply. Or not. Or just a bit of a cock-up on behalf of the council? Note to self – try to look through them. Just not now.

What else? I’m intrigued as to how many solar farm photovoltaic park applications there are out there. There seem to be more than a few on the island at least. This is why we need something like Planning Alerts back online. Chris? Maybe I need to pick up the scraping baton for the Isle of Wight council website at least if that’s still on the pending list?

I’, also thinking: it would be nice to have a KML file marking out the boundaries of each one. When data becomes requestable as such, will we be able to request KML or shapefile descriptions of land areas suggested for large developments such as this? I’d like to see some now.

What else. Who’s putting these applications in, maybe? BNRG Renewables Ltd. Hmmm… I wonder if it’s worth doing a little digging on OpenCorporates…?

Irish registered, and it seems that Irish company data is not open?

Available for purchase, but not open.

Is that another reason why companies may continue to like to register there, tax breaks aside?

How about the agents? Billed as follows.

Because I have a deeply suspicious mind.

Now I’m confused. No Ltd company of that name for some time. An LLP. But no more. 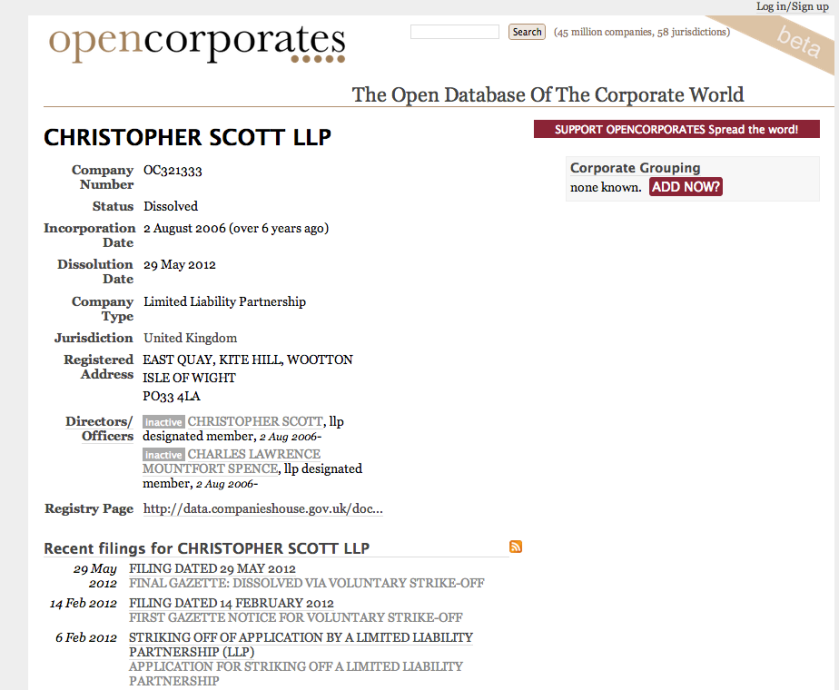 That LLP looks right, from the address, but they shut it down? Maybe they then started up as a limited company again but OpenCorporates hasn’t got the data yet?

If this is the case, and the company is registered as a limited company in England, Companies House should have the details.

When was that planning application made?

All I did was take the dog out for a walk and have a chat with a neighbour along the way. I didn’t want to be all NIMBY about the news-to-me proposed solar farm photovoltaic park. I’m just trying to come to an informed opinion.

A date. I have found a date. A pre-applicationdate – so this is the latest earliest date for the application.

But the form must surely be signed. And. Dated.

I’m still confused. Maybe the agent is too? OpenCorporates mentioned another name?

That must be it. But now I need to check something else. The Isle of Wight Armchair Auditor.

Good. Maybe just an administrative error on the form, then. I could try to do a cross-match between directors of this company, and of the previous ones, if OpenCorporates holds that information, with local councillor names, but it’s getting late. And I’m hungry.

All I did was take the dog for a walk. On a beautiful crisp afternoon.