With the recent brouhaha around corporate tax wheezes, I wonder – can we may a fantasy tax league style game out of it?

A year or two year after I graduated, I shared a house with, amongst others, an active wargamer, which meant that every so ofter the living room table was turned over to a miniature battlefield. These weren’t just games, of course: I seem to recall one of our regular visitors had some sort of link to the University of Bradford Peace Studies group, where I imagine playing out conflict situations in game-like settings is useful experimental device. One big idea I picked up on was the notion of a megagame, (I think in the context of one of the regular players taking part in one, maybe even this one? Operation Market Garden 2, Montgomery Wing, Army Staff College, Sandhurst, 25 Sept, 1993, 128 participants).

Megagames are “multi-player historical simulation game, in which the participants are organised into teams, and those teams into an hierarchy of teams” [about]. The most recent one – Urban Nightmare – Crisis in a modern city, considers an urban crisis (which may or may not include the sort of zombie attack, the preparedness for which local councils are regularly FOI’d: Derby, Nov 2012, Lincoln, August 2012, Leicester, June 2011. Only Bristol, July 2011 appears to have it covered;-) For other examples, search for zombie on WhatDoTheyKnow. Bear in mind that if you put in such a request yourself, that’s £50 (or however much…) or so of your council task you’ve just squandered.)

Councils and government run preparedness exercises and “serious games” on a regular basis, of course, both in terms of real world crises (search for council emergency exercise site:bbc.co.uk for examples), as well as online incidents: Steph Gray’s Social Simulator, for example, allows you to ask “How would your team handle social media in a crisis?” and then play out the response in closed environment (anyone remember Argyll and Bute…)

In certain respects, hack days resemble the notion of a megagame, although the focus is not so much on playing out a particular event based scenario as trying to ‘play out” some of the possibilities of a datacentric one. (A good example of this might be the upcoming NHS Hackday.)

The recent public outcry over the way in which global corporates play the international tax system to minimise their global tax spend, spawned by the appearance of Google, Starbucks and Amazon at the Public Accounts Committee, led to the announce of tax avoidance handling measures in the Autumn Statement – Anti-Avoidance and Evasion (press release, Ministerial statement, background).

I’m sure the HMRC plays out its proposed tax changes behind closed doors, trying to pre-empt the machinations of the corporate accountants hell bent on minimising tax expenditure, but I’ve been wondering: how about setting up a “Fantasy Tax League” or “Fantasy Tax Hack” Game, where players are given a notional global corporate to play with, and a lousy tax situation, along with a whole bunch of (real) tax law with the aim of showing just how much tax spend they can save by tweaking the corporate structure and accounting lines.

Such a game might resemble “fantasy fund” or “fantasy portfolio” challenges, or things like the Daily Telegraph’s A Better’s Way to Invest fantasy spread-betting demonstration, which just happens to feature an ongoing commentary by the OU Business School’s Professor Fenton-O’Creevy.

Bonus point would be awarded for the most complex corporate structures imagined: 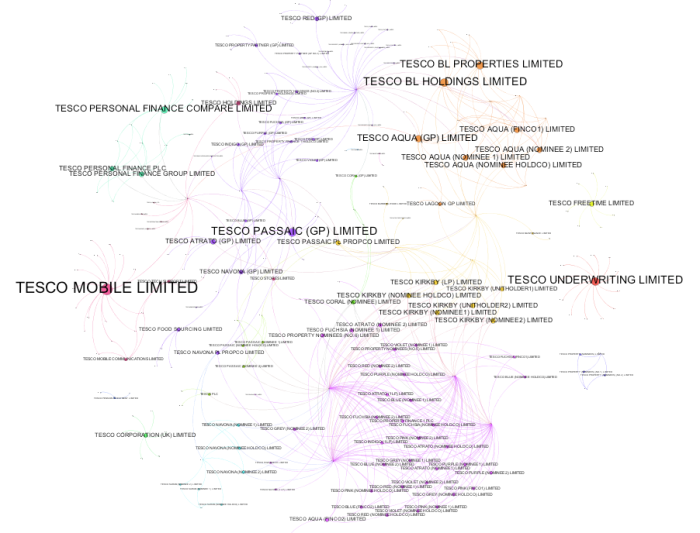 The game would be open to all-comers, from the big accounting and consultancy firms, acting in their own name (with corporate logos to identify them in the current results table), as well as tax gamers and armchair auditors (who apparently aren’t engaging with Government online data). The requirements of the game that each participant publish their corporate structures, tax avoidance and efficiency schemes in order to prove how much they have saved the notional company.

Of course, there’s always the danger that by gaming tax law in public, tax laws will be changed at an ever increasing rate, turning the whole thing into some sort nomic like metagame, where the government changes rules on the one hand, and the accountants provide ‘as-if’ rule changes by finding alternative interpretations to regulations than the ones intended by the parliamentary drafters…

2 thoughts on “Hack Days and Megagames – Time for a “Fantasy Tax Avoidance League”?”