Christmas Tree day, and though it’s not decorated yet, at least it’s up. The screws in the trusty metal base had rusted a little since Twelfth Night last year, but a pair of pliers and a dab of engine from the mower dipstick seemed to do the trick in loosening them; then it was time to go off to the “Lights of Love” Carol Service in aid of the local hospice at the Church in our old parish.

(A similar service in the local pub missed last week.)

The drive, a little bit longer than usual: temporary traffic lights set up around a hole in the road – gas leak, apparently.

I’ve never visited the Island’s hospice (Earl Mountbatten was the governor, then first Lord Lieutenant, years ago), but it seems they’ve recently opened a wifi enable café; must check it out some time…

Carols sung, community choir, coffee and a mince pie. Shop bought, not Mothers’ Union home made. Illness put the refreshments in doubt, homebaking too? Had I known, maybe I should have brought some of mine. Or maybe not.

Chat with the town Mayor, (sounds grand, doesn’t it?! Longstanding friend.). Remembrance. Surprise declared about my lack of engagement, on civil liberties grounds, about a recent action by the Isle of Wight Council, the police, and representatives of the DWP – Department of Work and Pensions – involving the stopping of cars at commuter time and drivers (presumably just drivers?) consequently “quizzed about their National Insurance numbers, who their employers were and who they lived” [src]. (The story so far… Crackdown on bad driving and aftershock ‘Big Brother’ criticism of operation. The council leader also had a response: Tories hit back at criticism of benefits operation/Cllr Pugh: IW Conservatives support Police/DWP Benefit vehicle stops).

All I did was go to a carol service. Now this: department work pensions question suspected fraud

Interesting – the Power of FOI: [p]lease would you be able to provide me with a copy of the procedure and guidance followed by the DWP fraud investigators where there is suspected fraud. 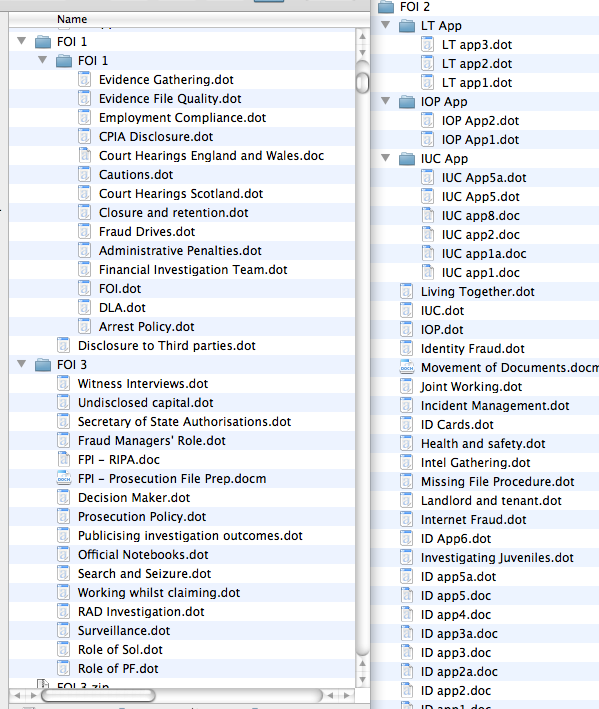 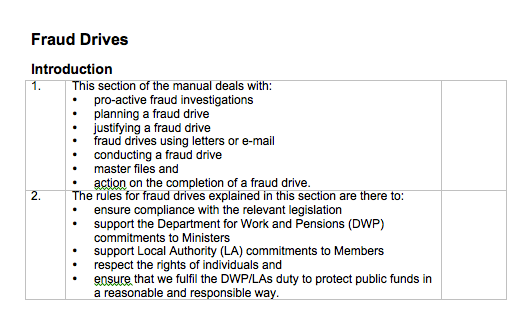 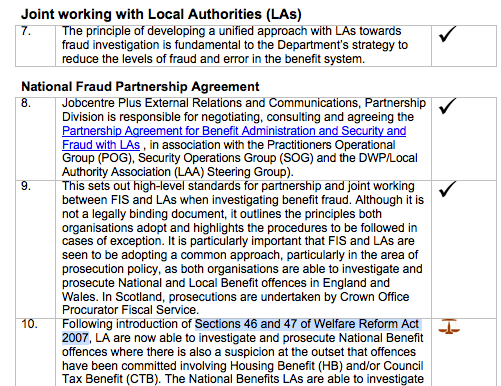 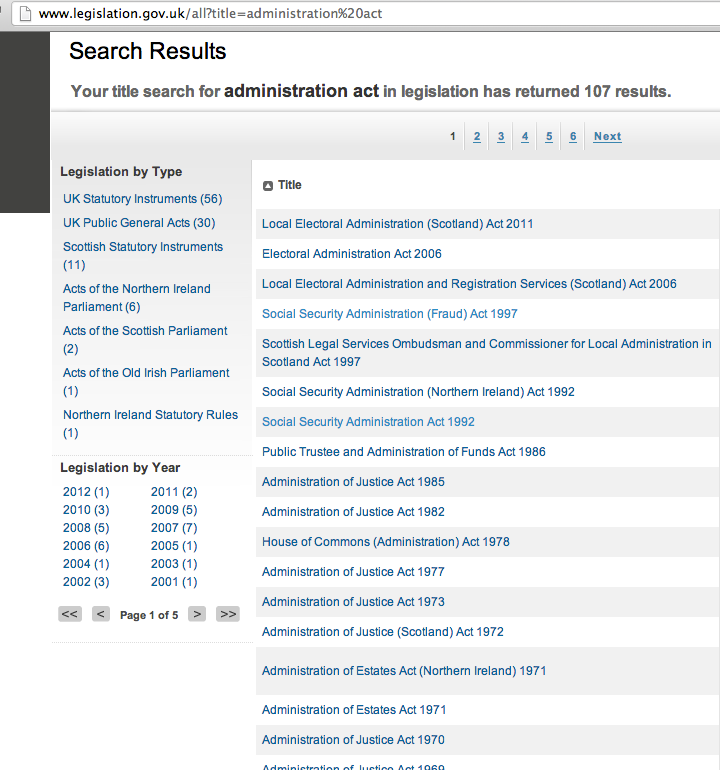 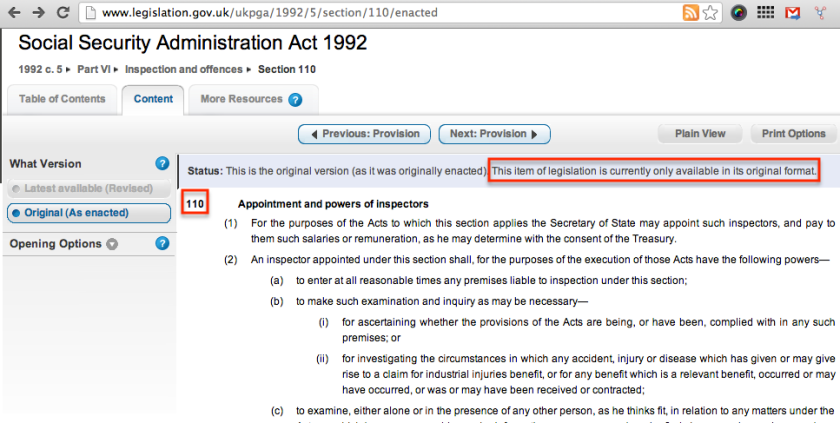 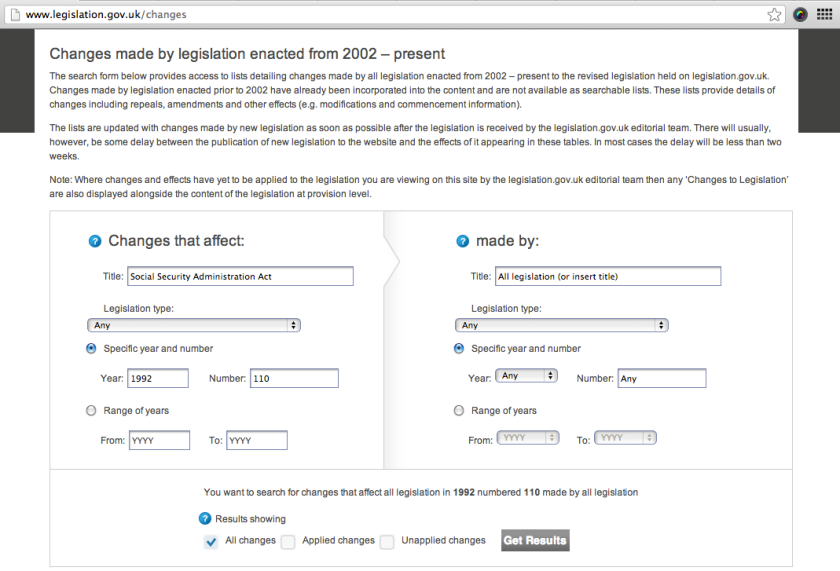 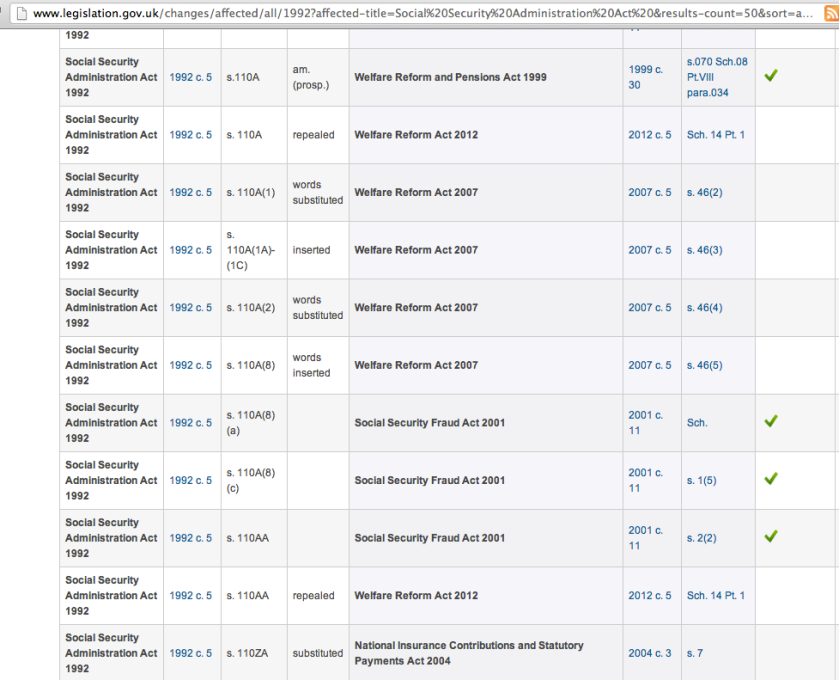 @psychemedia am. == amended == modified; prosp == prospective == the effect is not yet in force.

Thanks, John. (John’s bringing legislation up to date and on to the web. Give the man an honour.)

Click the links, in anticipation of the 110A, as introduced. No joy.

Enough of a clue. 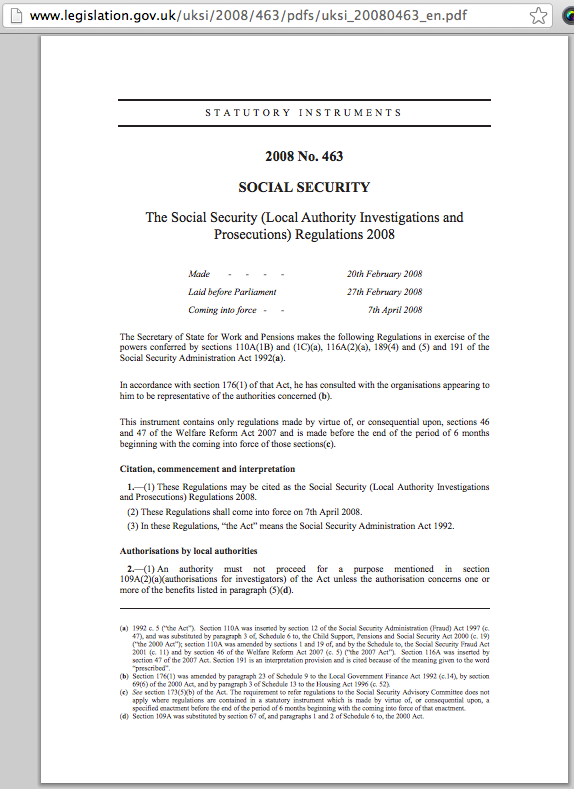 Cmd-f on a Mac (ctrl-f on Windows). Footnote. Small print. 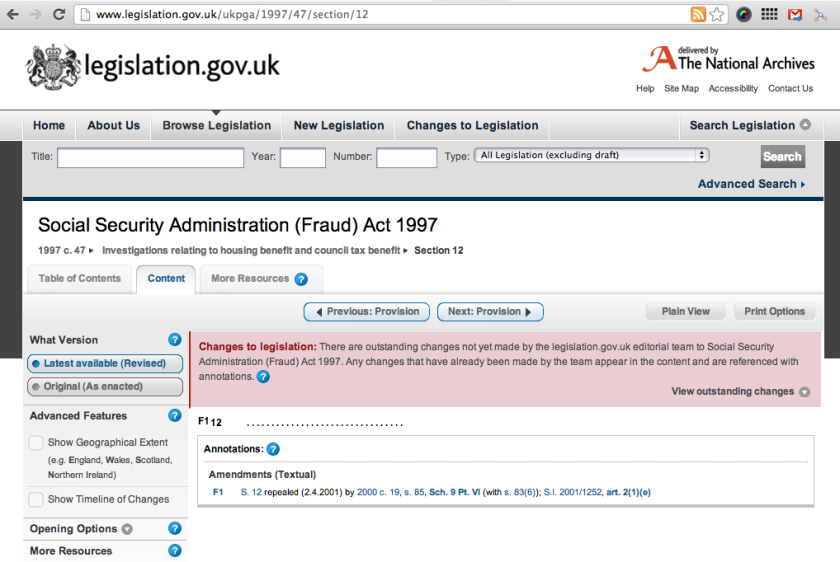 Gone. Amended out of existence. Replaced.

Maybe that’s why I could only find amendments to 110A. It may not be current, but I’m intrigued. How was it originally enacted?

All I did was go to a carol service. All I want to do is be informed about what powers Local Authorities and the DWP have with respect to “quizzing” citizens stopped apparently at random. I just want to be an informed citizen: what powers were available to the Isle of Wight Council and the DWP a week or two ago?

So I’ve tracked down the original 110A, but so what? It’s not currently enacted, is it? That was a sidetrack. An aside. What does 110A allow today, bearing in mind it’s due for repeal (and possibly, prior to that, subject to as yet uncommenced further amendments)?

I guess I could pay a subscription to a legal database to more directly look up the state of the law. (Only I probably wouldn’t have to pay – .ac.uk credential and all that. Member of an academic library and the attendant privileges that go with it. Lessig found that, in a medical context. 11 minutes in. Because. BECAUSE. $435 to you. But then… Table 4. That’s with the privilege of .edu or .ac.uk library access. That’s with the unpaid work of academics running the journals, providing the editorial review services, handing over copyrights (that they possibly handed over to their institutions anyway…) to publishers for free – only not; at public expense, for publicly funded academics and researchers. And for the not-insignificant profit line of the (commercial) academic publishers. As Monbiot suggests.)

But that wouldn’t be right, would it? Ignorance of the law may not be a defence, but it can’t be right that to find out the law I need to pay for access? The legislation.gov.uk team are doing a great job, but as I’m starting to find, the law is oh, so messy, and it needs to be posted right. But I believe that they will get it up to date and they *will* get it all there. (At least give the man an honour when it’s there…)

So what does the legislation actually say? 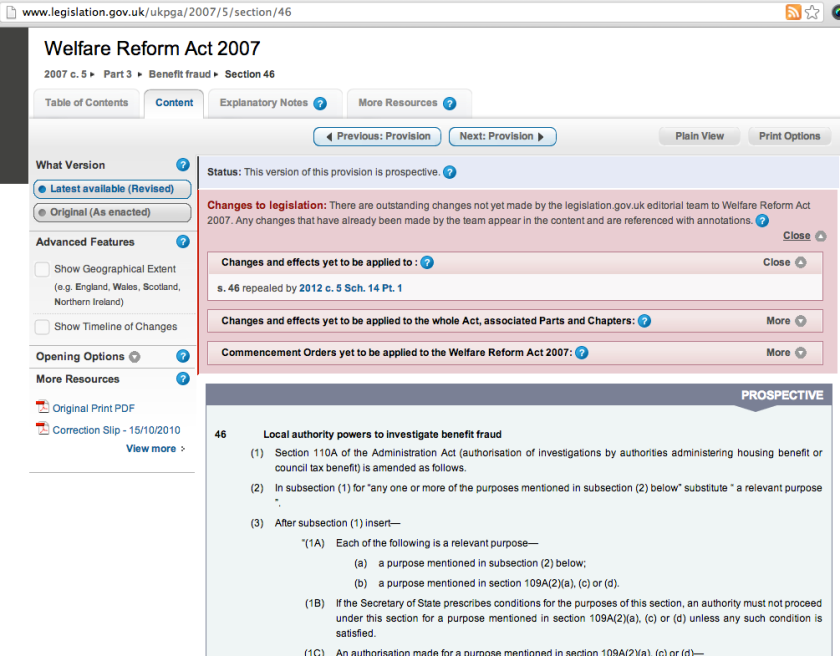 Right – so now I’m totally confused. This has been repealed.. but the repeal has not yet commenced? What’s this s. 109A rathole? And what’s Welfare Reform Act 2012 all about?

All I did was go to a carol service. And all I want to find out is the bit of legislation that describes the powers the local council and the DWP were acting under when they were “quizzing” motorists a couple of weeks ago. 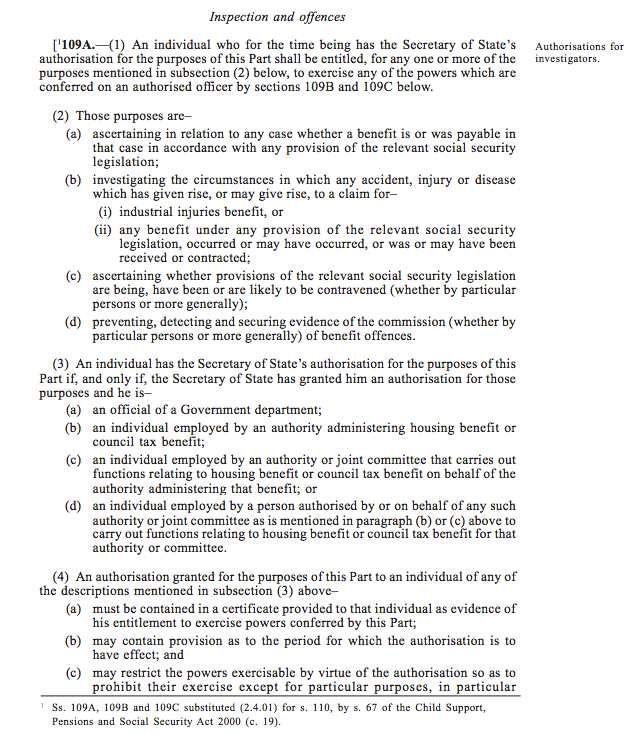 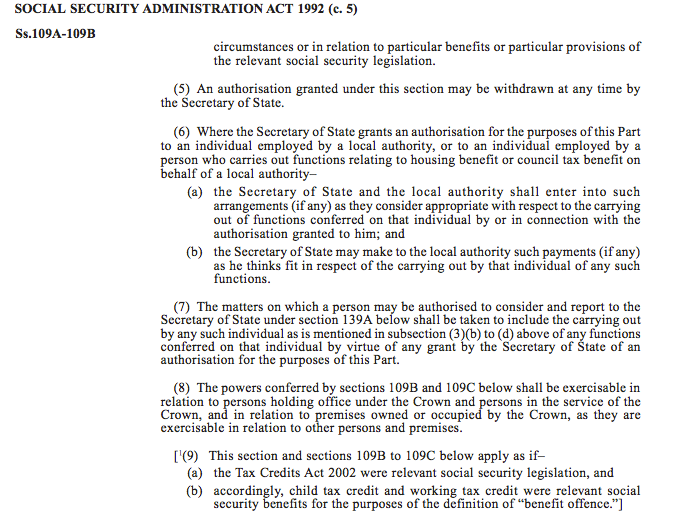 But I’m too tired to read it and my battery is about to die. So I’m not really any the wiser.

All I did was go to a carol service.

PS why not make a donation to the Earl Mountbatten Hospice? Or your local hospice. In advance.

S.163 of the Road Traffic Act 1988 appears to be the regulation that requires motorists to stop if so directed by a uniformed police or traffic officer.

Now I’m also wondering: as well as the powers available to the DWP and the local council, by what right and under what conditions were cars being stopped by the police and how were they being selected?