Picking up on A Couple of Proof of Concept Demos with the Cloudworks API, and some of the comments that came in around it (thanks Sheila et al:-), I spent a couple more hours tinkering around it and came up with the following…

A prettier view, stolen from Mike Bostock (I think?)

I also added in some new parameterised ways of accessing various different views over Cloudworks data using the root https://views.scraperwiki.com/run/cloudworks_network_d3js_force_directed_view_pretti/

Firstly, we can make calls of the form: ?cloudscapeID=2451&viewtype=cloudscapecloudcloudscape 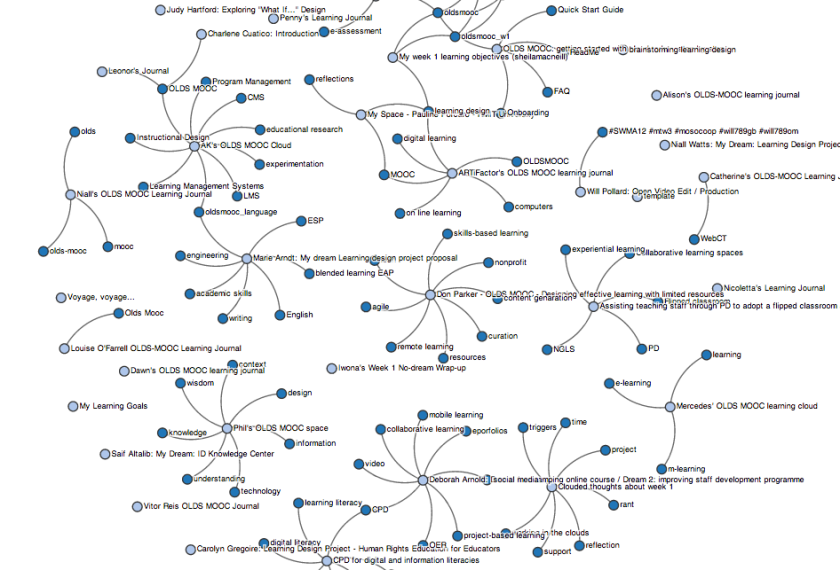 Even though there aren’t many nodes or edges, this is quite a cluttered view, so I maybe need to rethink how best to visualise this information?

I’ve also done a couple of views that make use of follower data. For example, here’s how to call on a view that visualises how the folk who follow a particular cloudscape follow each other (this is actually the default if no viewtype is given) –
cloudscapeID=2451&viewtype=cloudscapeinnerfollowers

And here’s how to call a view that grabs a particular user’s clouds, looks up the cloudscapes they belong to, then graphs those cloudscapes and the people who follow them: ?userID=1174&viewtype=usercloudcloudscapefollower

Here’s another way of describing that graph – followers of cloudscapes containing a user’s clouds.

The optional argument filterNdegree=N (where N is an integer) will filter the diaplayed network to remove nodes with degree <=N. Here’s the above example, but filtered to remove the nodes that have degree 2 or less: ?userID=1174&viewtype=usercloudcloudscapefollower&filterNdegree=2 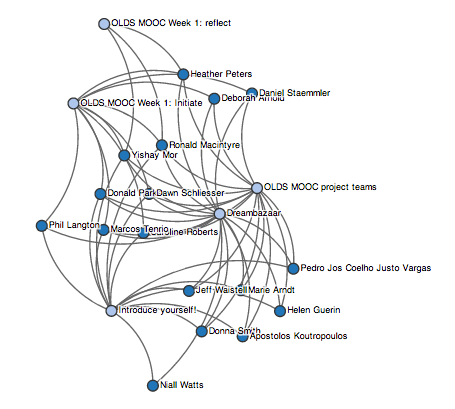 (Note that on inspecting that graph it looks as if there is at least one node that has degree 2, rather than degree 3 and above. I’m guessing that it originally had degree 3 or more but that at least one of the nodes it was connected to was pruned out? If that isn’t the case, something’s going wrong…)

Also note that it would be neater to pull in the whole graph and filter the d3.js rendered version interactively, but I don’t know how to do this?

However…I also added a parameter to the script that generates the JSON data files from data pulled from the Cloudworks API calls that allows me to generate a GEXF network file that can be saved as an XML file (.gexf suffix, cf. Visualising Networks in Gephi via a Scraperwiki Exported GEXF File) and then visualised using a tool such as Gephi. The trick? Add the URL parameter &format=gexf (the (optional) default is &format=json) [example]. 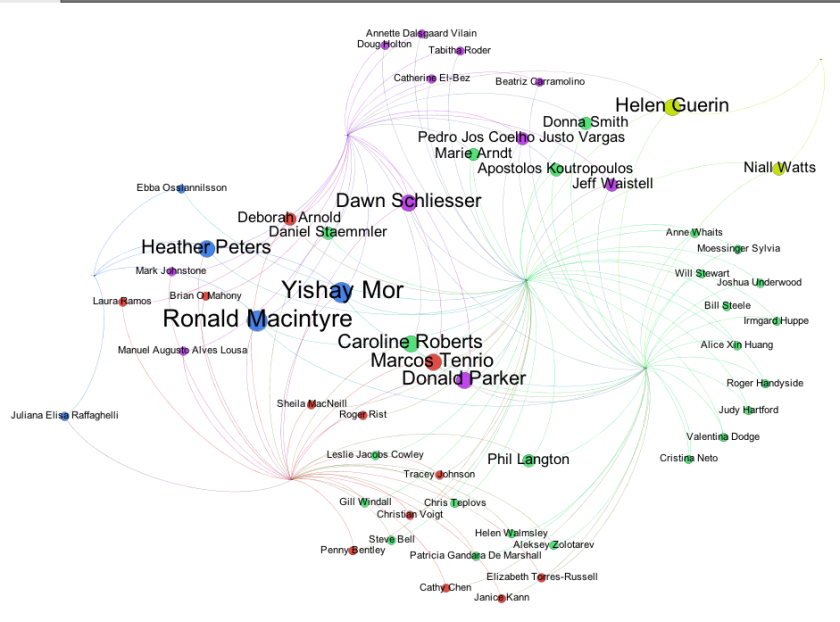 Gephi, of course, is a wonderful tool for the interactive exploration of graph-based data sets…. including a wide range of filters…

So, where are we at? The d3.js force directed layout is all very shiny but the graphs quickly get cluttered. I’m not sure if there are any interactive parameter controls I can add, but at the moment the visualisations border on the useless. At the very least, I need to squirt a header into the page from the supplied parameters so we know what the visualisation refers to. (The data I’ve played with to date – which has been very limited – doesn’t seem to be that interesting either from what I’ve seen? But maybe the rich structure isn’t there yet? Or maybe there is nothing to be had from these simple views?)

It may be worth exploring some other visualisation types to see if they are any more legible, at least, though it would be even more helpful if they were simply more informative ;-)

PS just in case, here’s a link to the Cloudworks API documentation.

PPS if there are any terms of service associated with the API, I didn’t read them. So if I broke them, oops. But that said – such is life; never ever trust that anybody you give data to will look after it;-)

One thought on “Further Dabblings with the Cloudworks API”