I’ve been tinkering with OpenCorporates data again, tidying up the co-director scraper described in Corporate Sprawl Sketch Trawls Using OpenCorporates (the new scraper is here: Scraperwiki: opencorporates trawler) and thinking a little about working with the data as a graph/network.

What I’ve been focussing on for now are networks that show connections between directors and companies, something we might imagine as follows:

In this network, the blue circles represent companies and the red circles directors. A line connecting a director with a company says that the director is a director of that company. So for example, company C1 has just one director, specifically D1; and director D2 is director of companies C2 and C3, along with director D3.

It’s easy enough to build up a graph like this from a list of “company-director” pairs (or “relations”). These can be described using a simple two column data format, such as you might find in a simple database table or CSV (comma separated value) text file, where each row defines a separate connection:

This is (sort of) how I’m representing data I’ve pulled from OpenCorporates, data that starts with a company seed, grabs the current directors of that target company, searches for other companies those people are directors of (using an undocumented OpenCorporates search feature – exact string matching on the director search (put the direction name in double quotes…;-), and then captures which of those companies share are least two directors with the original company.

In order to turn the data, which looks like this: 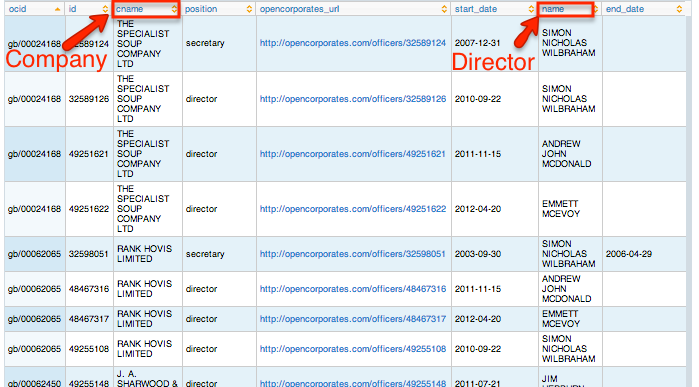 into a map that resembles something like this (this is actually a view over a different dataset):

we need to do a couple of things. Working backwards, these are:

Tools include desktop tools such as Gephi (which can import data directly from a CSV file or database table), or graph viewers such as the sigma.js javascript library, or d3.js with an appropriate plugin.

Note that the positioning of the nodes in the visualisation may be handled in a couple of ways:

The dataflow I’m working towards looks something like this: 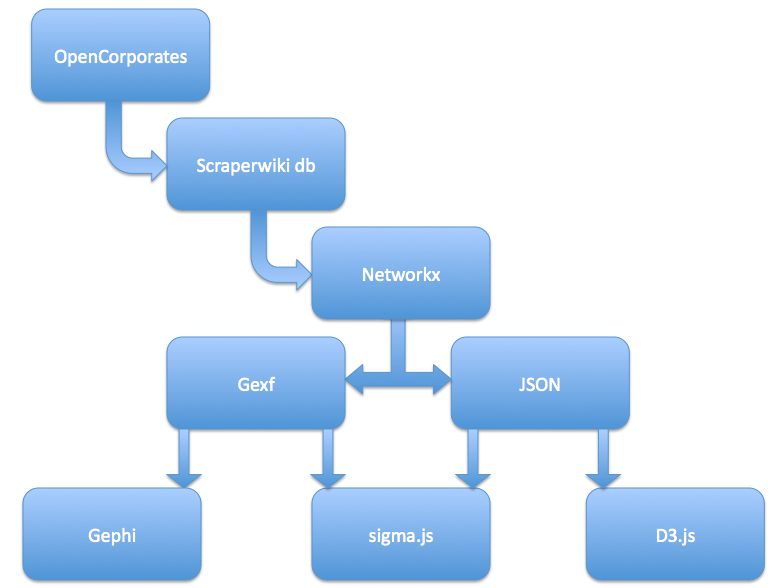 networkx is a Python library (available on Scraperwiki) that makes it easy to build up representations of graphs simply by adding nodes and edges to a graph data structure. networkx can also publish data in a variety of handy exchange formats, including gexf (as used by Gephi and sigma.js), and a JSON graph representation (as used by d3.js and maybe sigma.js (example plugin?).

This view can therefore be used to easily export data from my OpenCorporates trawler as a gexf file that can be used to easily import data into the Gephi desktop tool, or provide a URL to some JSON data that can be visualised using a Javscript library within a web page (I started doodling the mechanics of one example here: sigmajs test; better examples of what’s possible can be seen at Exploring Data and on the Oxford Internet Institute – Visualisations blog. If anyone would like to explore building a nice GUI to my OpenCorporates trawl data, feel free:-).

We can also use networks to publish data based on processing the network. The example graph above shows a netwrok with two sorts of nodes, connected by edges: company nodes and director nodes. This is a special sort of graph in that companies are only ever connected to directors, and directors are only ever connected to companies. That is, the nodes fall into one of two sorts – company or director – and they only ever connect “across” node type lines. If you look at this sort of graph (sometimes referred to as a bipartite or bimodal graph) for a while, you might be able to spot how you can fiddle with it (technical term;-) to get a different view over the data, such as those directors connected to other directors by virtue of being directors of the same company:

or those companies that are connected by virtue of sharing common directors:

The networkx library conveniently provides functions for generating such views over the data, which can also be accessed via my scraperwiki view:

As the view is paramaterised via a URL, it can be used as a form of “glue logic” to bring data out of a directors table (which itself was populated by mining data from OpenCorporates in a particular way) and express it in a form that can be directly plugged in to a visualisation toolkit. Simples:-)