I wonder whether this will be the last round of elections without a national live data feed from somewhere pushing out the results in a standardised form? So far, here are the local “live election data” initiatives I’ve spotted/had pointed out to me: 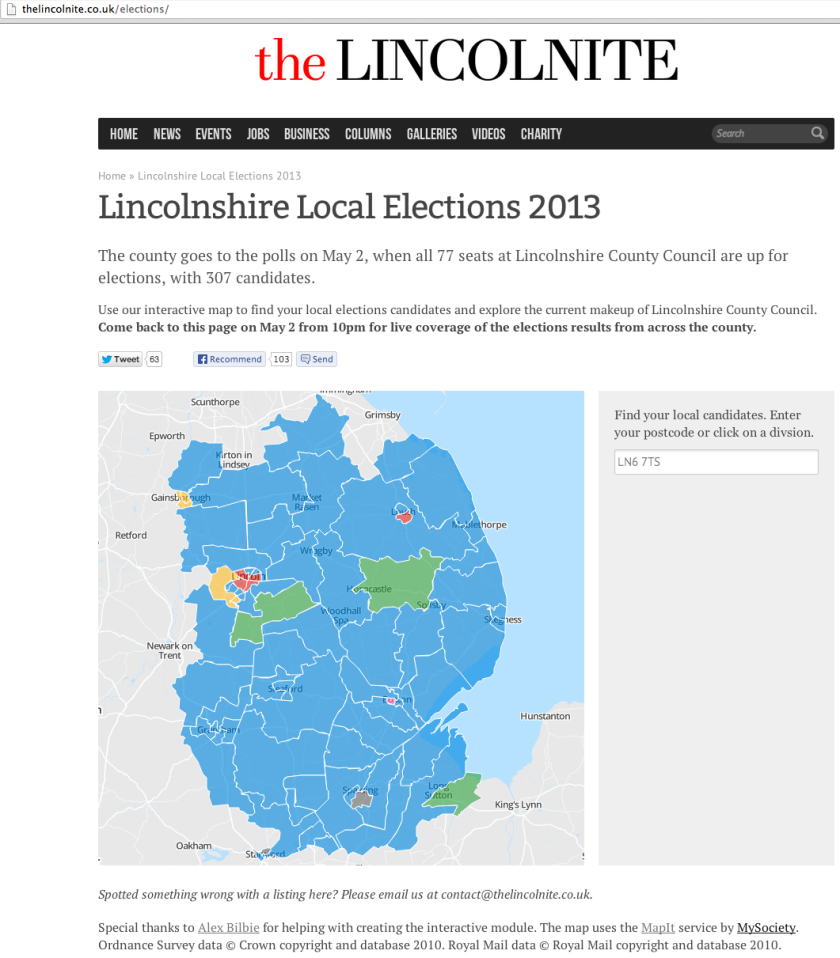 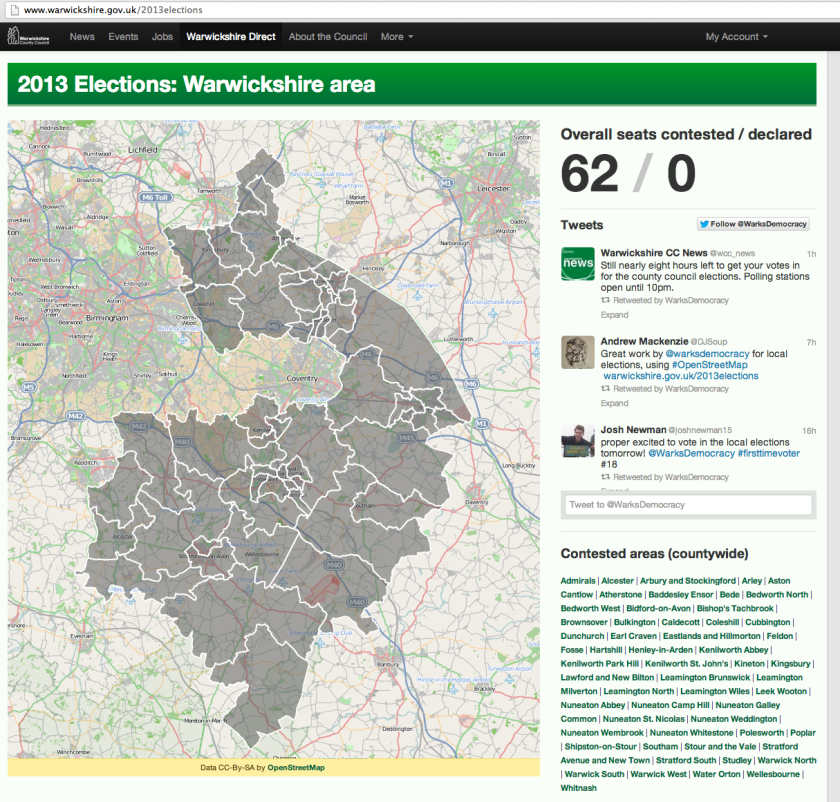 The Warwickshire team are also making shapefiles/KML files (for the plotting of boundary line maps) and live results data (via Google Fusion Tables) too, as well as making data available about previously elected candidates: 2013 Elections – In Real Time 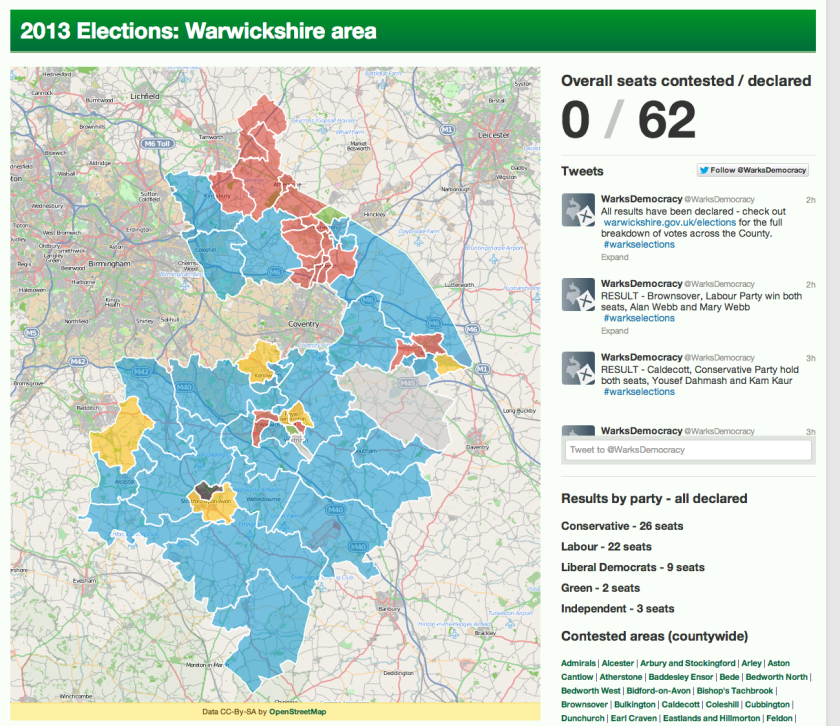 Surrey has the Surrey elections dashboard (via @BenUnsworth) that will switch to a live map as the results come in, but currently offers a search box that accepts a postcode and then tells you who your candidates are and where you can vote: 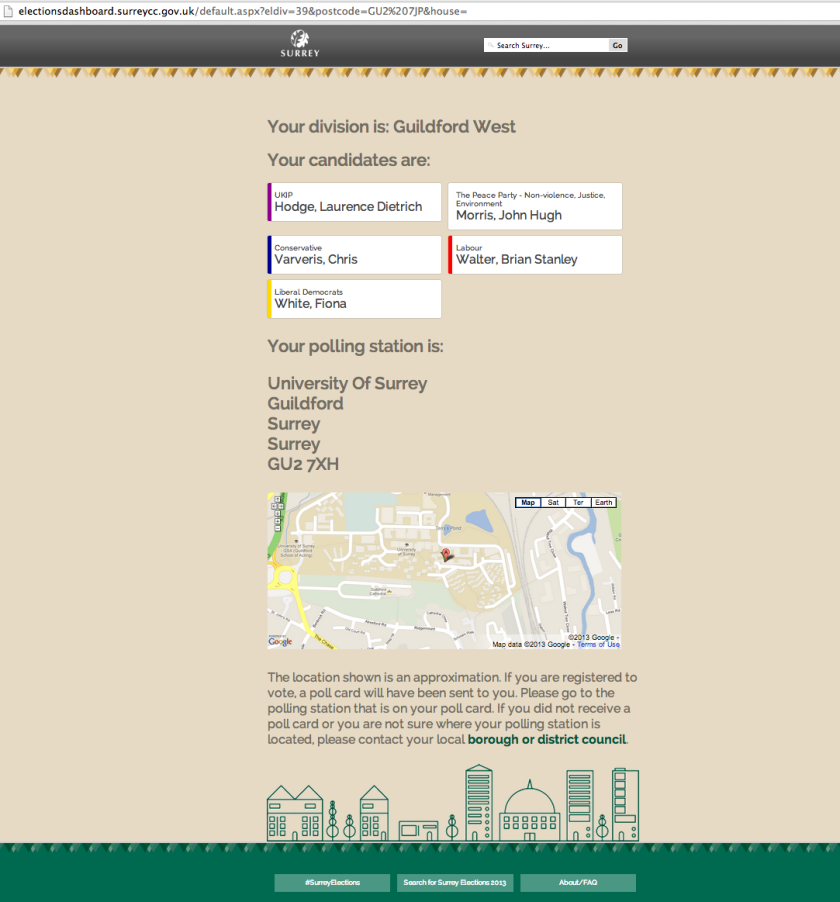 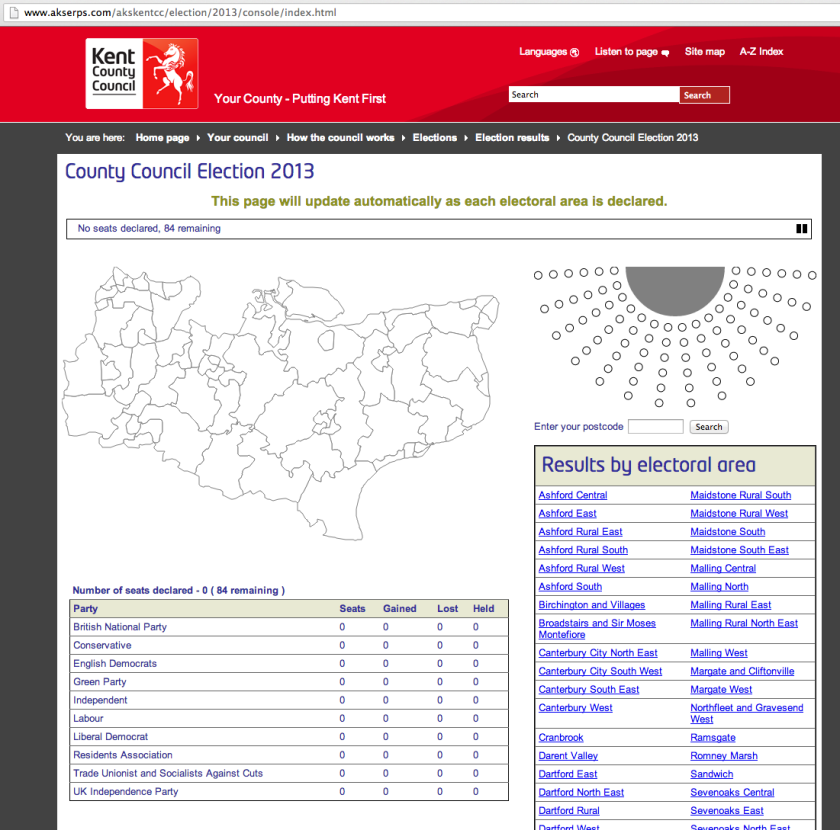 I was looking forward to seeing how this view played out once the results started to come in, but, erm, oops?!

Bristol
Bristol opted for a tabbed display showing a range of views over their council elecitons results. A simple coloured symbol maps shows the distribution of seats by ward across the parties: 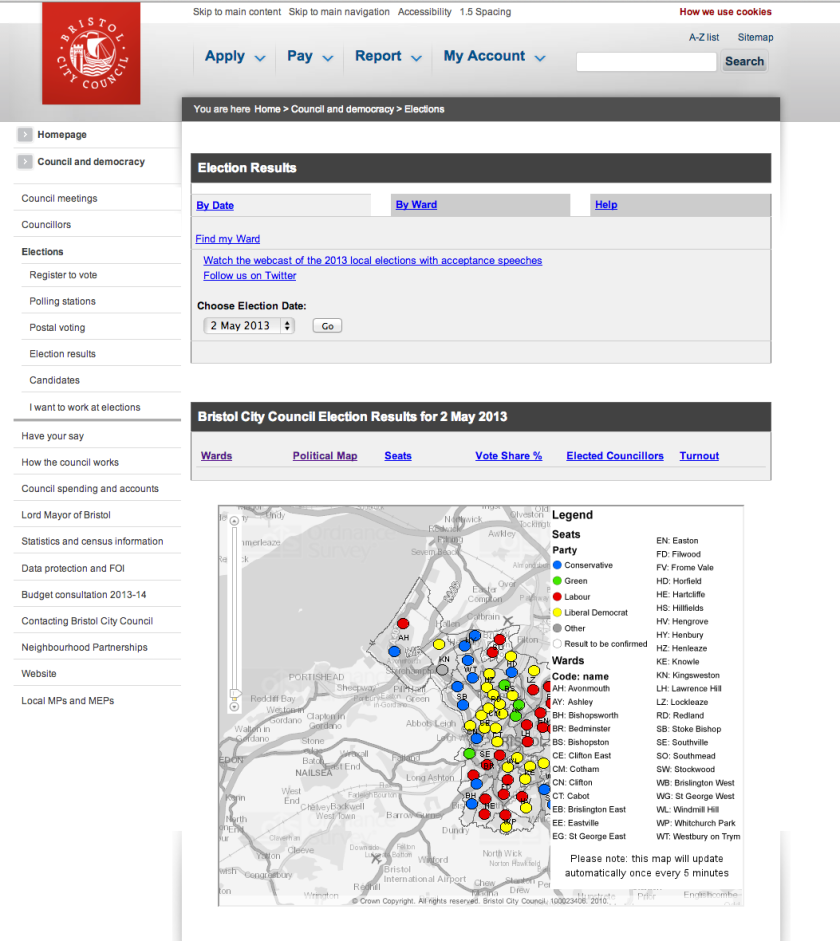 Bristol also provided a view over the turnout: 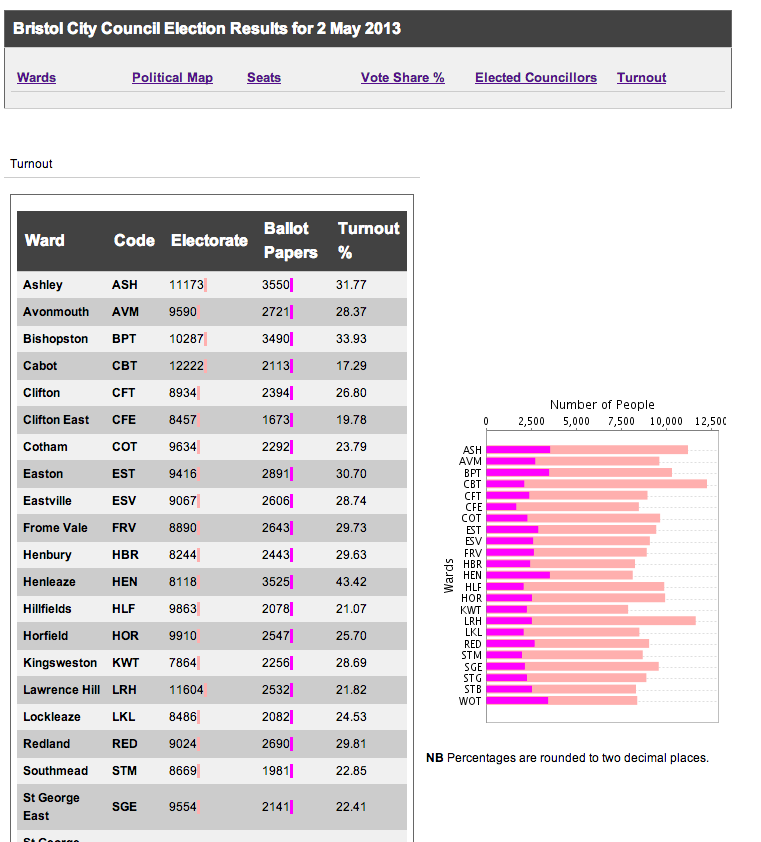 (Would it be useful to also be able to see this as percentage turnouts? Or to depict the proportional turnout on a map to see if any geographical reasons jump out as a source of possible differences?)

Cumbria
Cumbria County Council show how to make use of boundary files to mark or <choropleth election maps relate the party affiliation of the candidate taking each particular seat by electoral division area: 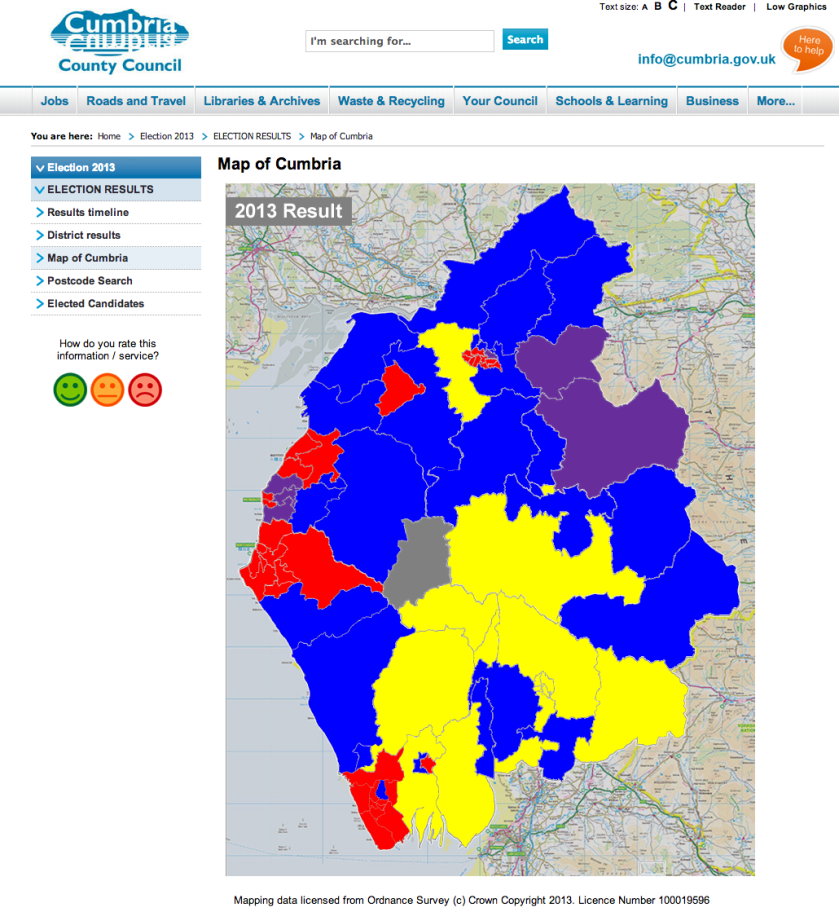 Cumbria also provided a view of seat allocations in districts; I don’t understand the scale they used to on the x-axes though? It differs from district to district. For example, it looks to me as if more seats went to Conservatives in Eden than in Carlise? Or is the scale related to the percentage of seats in the district? I’d class as “infographic-standard”, i.e. meaningless as a visualisation;-) 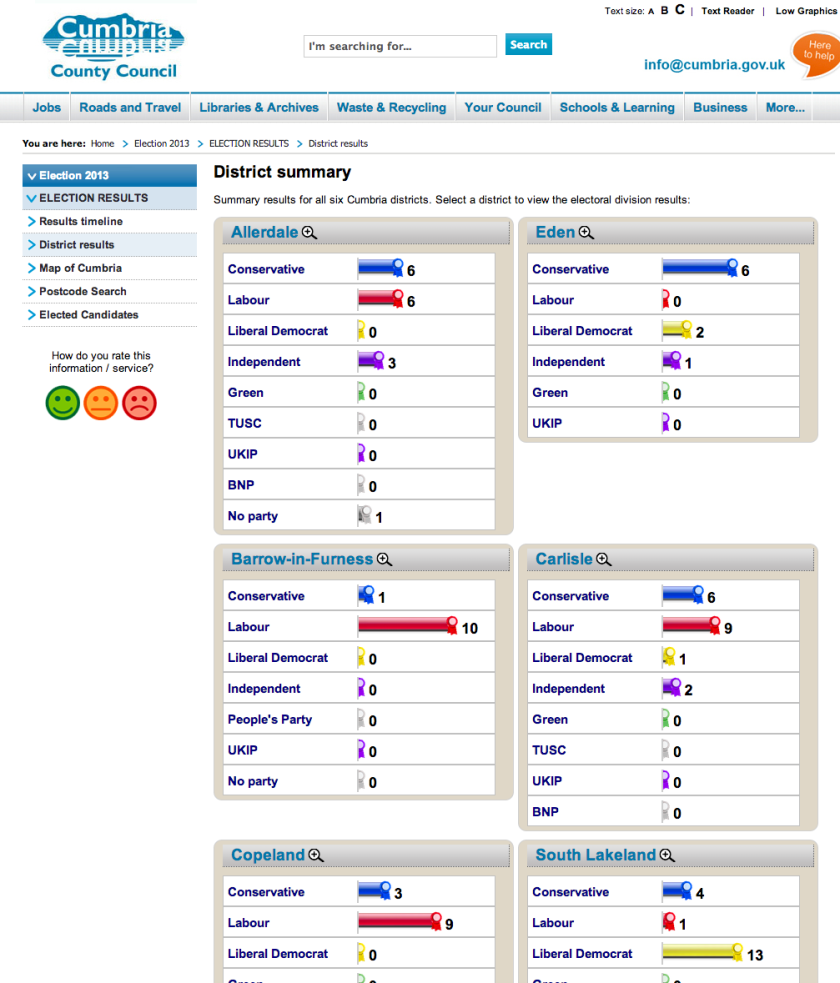 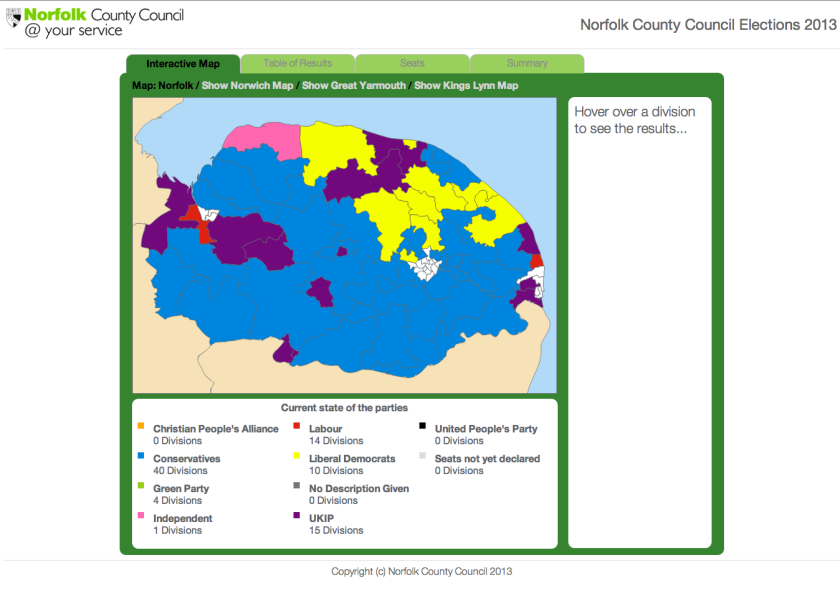 Norfolk also produced a graphic showing how seats might be distributed in the chamber: 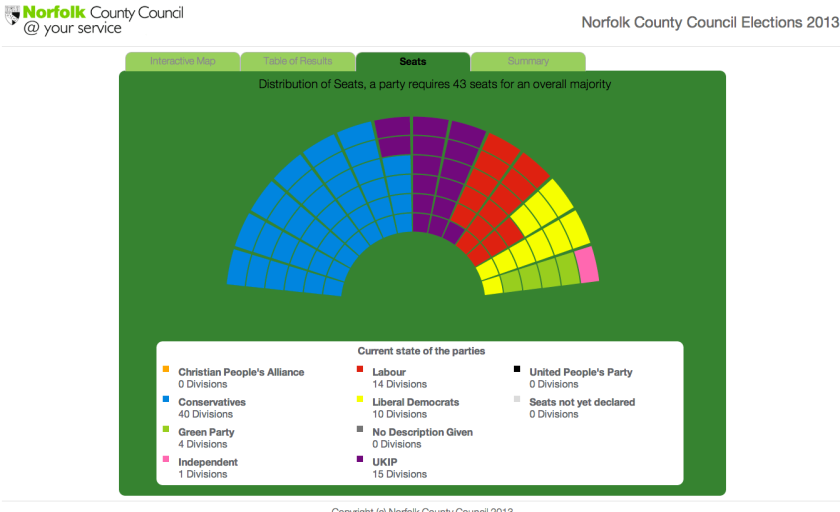 I think one of the major issues with this sort of graphic is how you communicate the possible structurings of the chamber based on what sort of affiliations and groupings play out?

Wales online have a nice clean feel to their results map for Anglesey, but what’s going on with the legend? They don’t make it easy to get the branding into the screengrab either?! THe Telegraph produced a map showing results of the elections at national scale based on control of councils by party: 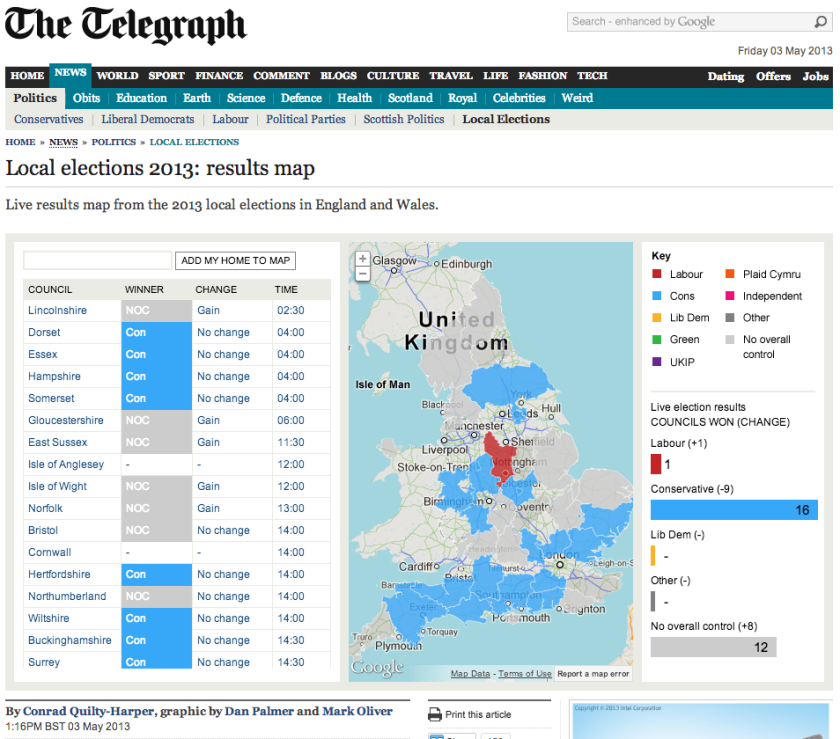 And ever helpful, the Guardian datablog made the data available (will they do data broken down at seat level too, I wonder?) Here’s the map they produced: 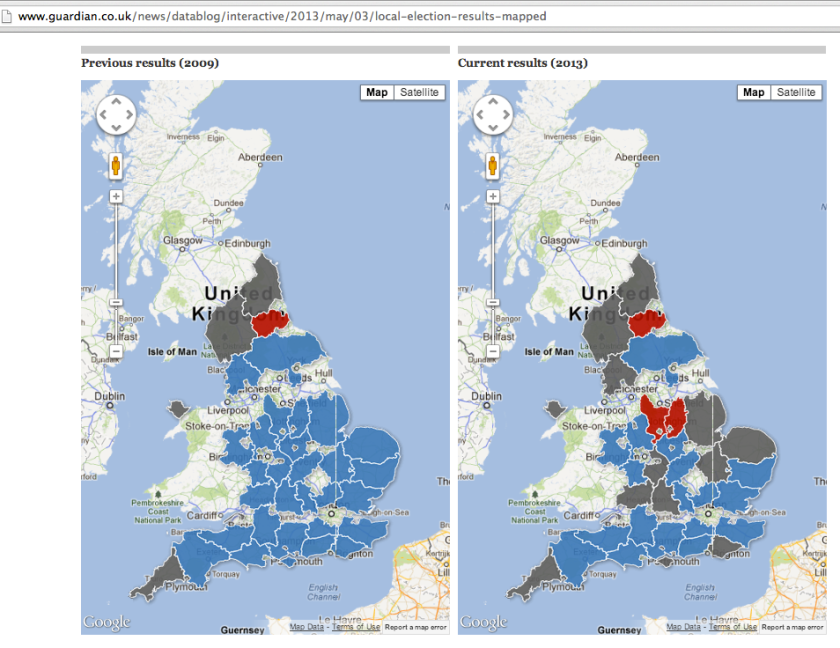 Hmmm… do I recognise that sort of layout? Ah, I know, it reminds me of this example of Data Journalists Engaging in Co-Innovation… around boundary changes.

Other…
For lists of current councillors, see OpenlyLocal, which has data available via a JSON API relating to current councillors and their affiliations. (It would be good if a frozen snapshot of this could be grabbed today, for comparison with the results following today’s election?)

If you’re interested in doing something data related around the election, or would like to learn how to do something with the data generated by the election, check out this informal resource co-ordination document. If you’re interested in checking out your local council website to see whether they publish any #opendata that would help you generate you own live maps, dashboards or consoles, the School of Data post “wot I wrote” on Proving the Data – A Quick Guide to Mapping England and Wales Local Elections may provide you with a quick start guide to making use of some of it…

If you know of any other councils or local presses publishing election related data warez, maps, live data feeds, etc, please post a link and brief description in the comments, and I’ll try to keep this post up to date…