In Questioning Election Data to See if It Has a Story to Tell I started to explore various ways in which we could start to search for stories in a dataset finessed out of a set of poll notices announcing the recent Isle of Wight Council elections. In this post, I’ll do a little more questioning, especially around the assentors (proposers, seconders etc) who supported each candidate, looking to see whether there are any social structures in there resulting from candidates supporting each others’ applications. The essence of what we’re doing is some simple social network analysis around the candidate/assentor network. (For an alternative route to the result, see To What Extent Do Candidates Support Each Other Redux – A One-Liner, Thirty Second Route to the Info.)

This is what we’ll be working towards:

If you want to play along, you can get the data from my IW poll notices scrape on ScraperWiki, specifically the support table.

Here’s a reminder of what the original PDF doc looked like (archive copy):

Checking the extent to which candidates supported each other is something we could do by hand, looking down each candidate’s list of assentors for names of other candidates, but it would be a laborious job. It’s far easier(?!;-) to automate it…

When we want to compare names using a computer programme or script, the simplest approach is to do an exact string match (a string is a list of characters). Two strings match if they are exactly the same, so for example: This string is the same as This string, but not this string (they differ in their first character – upper case T in the first example as compared with lower case t in the last. We’ll be using exact string matching to identify whether a candidate has the same name as any of the assentors, so on the scraper, I did a little fiddling around with the names, in particular generating a new column that recasts the name of the candidate into the same presentation form used to identify the assentors (Firstname I. Lastname).

We can download a CSV representation of the data from the scraper directly:

The first thing I want to explore is the extent to which candidates support other candidates to see if we can identify any political groupings. The tool I’m going to use to visualise the data is Gephi, an open-source cross-platform application (requires Java) that you can download for free from gephi.org.

To view the data in Gephi, it’s easiest if we rename a couple of columns so that Gephi can recognise relations between supporters and candidates; if we open the CSV download file in a text editor, we can rename the candinit as target and the column as Source to represent an arrow going from an assentor to a candidate, where the arrow reads something along the lines of “is a supporter of”.

You should now see a toolbar that includes an “Import Spreadsheet option”:

Import the CSV file as such, identifying it as an Edges Table:

If you click on the Overview tab button, you should see a mass of nodes/circles representing candidates and assentors with arrows going from assentors to candidates.

Let’s see how they connect – we can Run the Force Atlas 2 Layout algorithm for starters. I tweaked the Scaling value and ticked on Stronger Gravity to help shape the resulting layout:

If you look closely, you’ll be able to see that there are many separate groupings of connected circles – this represent candidates who are supported by folk who are not also candidates (sometimes a node sits on top of a line so it looks as if two noes are connected when in fact they aren’t…) 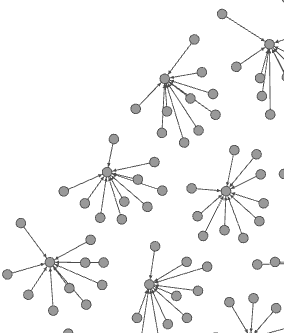 However, there are also other groupings in which one candidate may support another: 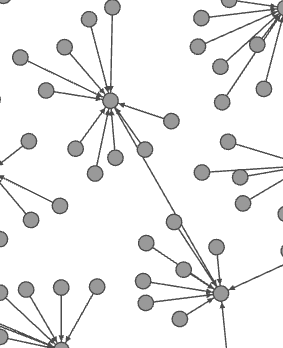 These connections may allow us to see grouping of candidates supporting each other along party lines.

One of the powerful things about Gephi is that it allows us to construct quite complex, nested filters that we can apply to the data based on the properties of the network the data describes so that we can focus on particular aspects of the network I’m going to filter the network so that it shows only those individuals who are supported by at least one person (in-degree 1 or more) and who support at least one person (out-degree one or more) – that is, folk who are candidates (in-degree 1 or more) who also supported (out degree 1 or more) another candidate. Let’s also turn labels on to see which candidates the filter identifies, and colour the edges along party lines. We can now see some information about the connectedness a little more clearly: 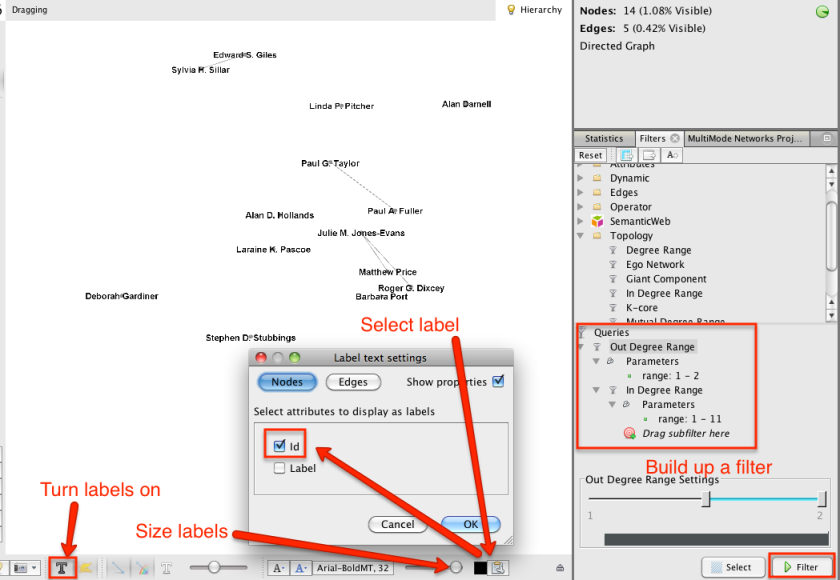 That’s a bit clearer, but there are still overlapping lines, so it may make sense to layout the network again: 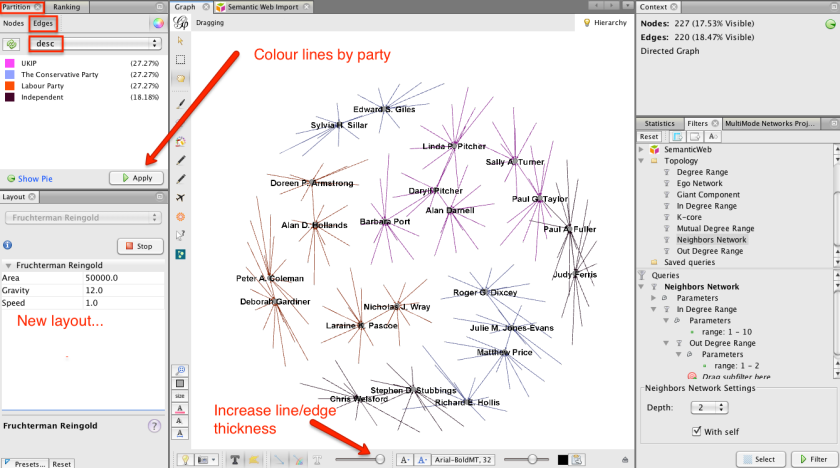 We can also experiment with other colourings – if we go to the Statistics panel, we can run a Connected Components filter that tries to find nodes that are connected into distinct groups. We can then colour each of the separate groups uniquely:

Let’s reset the colours and go back to colourings along party lines:

If we go to the Preview view, we can generate a prettified view of the network:

In it, we can clearly see groupings along party lines (inside the blue boxes). There is something odd, though? There appears to be a connection between UKIP and Independent groupings? Let’s zoom in:

Going back to the Graph view and zooming in, we see that Paul G. taylor appears to be supporting two candidates of different parties… Hmm – I wonder: are there actually two Paul G. Taylors, I wonder, with different political preferences? (Note to self: check on Electoral Commission website what regulations there are about assenting. Can you only assent to one person, and then only within the ward in which you are registered to vote? For local elections, could you be registered to vote in more than one electoral division within the same council area?)

To check that there are no other names that support more than one candidate, we can create another, simple filter that just selects nodes with out-degree 2 or more – that is, who support 2 or more other nodes:

Just that one then…

Looking at the fuller chart, it’s still rather scruffy. We could tidy it by removing assentors who are not themselves candidates (that is, there are no arrows pointing in to them). The way Gephi filters work support chaining. If you look at the filters, you will see they are nested, much like a nested comment thread in a forum. Filters at the bottom of the tree act on the graph and pass the filtereed network to date up the tree to the next filter. This means we can pass the network as shown above into another filter layer that removes folk who are “just” assentors and not candidates.

And again we can go into Preview mode to generate a nice vectorised version of the graph:

So there we have it a quick tour of how to use Gephi to look at the co-support structure of group of local election candidates. Were the highlighted candidates to be successful in their election, it could signify possible factions or groupings within the council, particular amongst the independents? Along the way we saw how to make use of filters, and spotted something we need to check (whether the same person supported two candidates (if that isn’t allowed?) or whether they are two different people sharing the same name.

If this all seems like too much effort, remembers that there’s always the One-Liner, Thirty Second Route to the Info.

PS by the by, a recent FOI request on WhatDoTheyKnow suggests another possible line of enquiry around possible candidates – if they have been elected to the council before, how good was their attendance record? (I don’t think OpenlyLocal scrapes this information? Presumably it is available somewhere on the council website?)

One thought on “More Storyhunting Around Local Elections Data Using Gephi – To What Extent Do Candidates Support Each Other?”