Over the last month or so, I’ve made a start reading through Mark Newman’s Networks: An Introduction, trying (though I’m not sure how successfully!) to bring an element of discipline to my otherwise osmotically acquired understanding of the techniques employed by various network analysis tools.

One distinction that made a lot of sense to me came from the domain of bibliometrics, specifically between the notions of bibliographic coupling and co-citation. 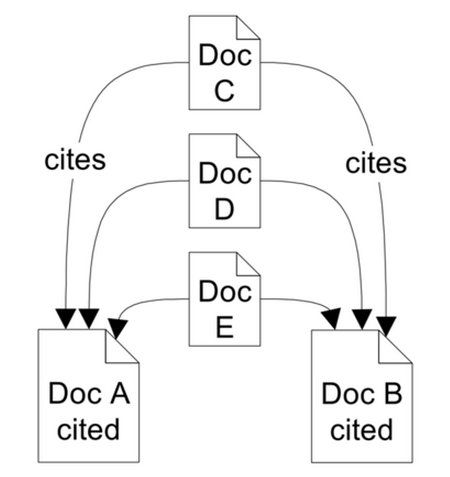 In graph terms, we might also represent this as simpler graph within which edges between two articles indicate that they have been co-cited by documents within a particular corpus, with the weight of each edge representing the number of documents within that corpus that have co-cited them. 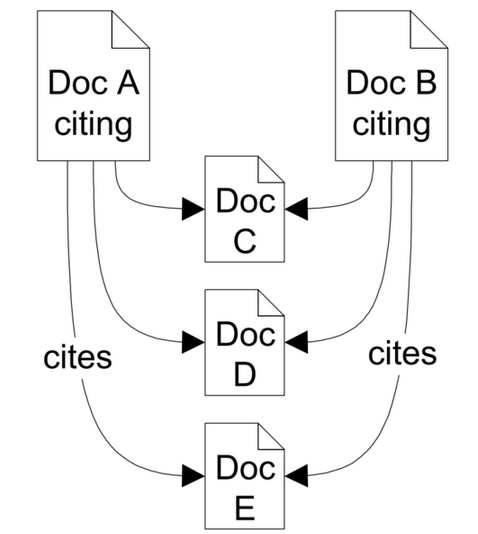 Again, in graph terms, we might think of a simpler undirected network in which edges between two articles act as an indicator that they have cited or referenced the same work, with the weight of the edge representing the number of documents that they have co-cited.

For some time I’ve been tinkering with the notion of co-director networks, using OpenCorporates data as a data source (eg Mapping Corporate Networks With OpenCorporates). What I’ve tended to focus on are networks built up from active companies and their current directors, looking to see which companies are currently connected by virtue of currently sharing the same directors. On the to do list are timelines showing the companies that a particular director has been associated with, and when, as well as directorial appointments and terminations within a particular company.

In both co-citation and bibliographic analyses, the nodes are the same type of thing (that is, works that are citated, such as articles). A work cites a work. (Note: does author co-citation analysis rely on mappings from works to cited authors, or citing authors to cited authors?). In company-director networks, we have bipartite representation, with directors and companies representing the two types of node and where edges connect companies and directors but not companies and companies or directors and directors; unless a company is a director, but we generally fudge the labelling there.

If we treat “companies that retain directors” as “articles that cite other articles”:

I’ve been doing this anyway, but the bibliographic coupling/co-citation distinction may help me tighten it up a little, as well as improving ways of calculating and analysing these networks by reusing analyses described by the bibliometricians?

Pondering the “future vs. past” distinction, the following also comes to mind:

– at the moment, I am generating networks based on current directors of active companies;
– could we construct a dynamic (temporal?) hypergraph from hyperedges that connect all the directors associated with a particular company at a particular time? If so, what could we do with this graph?! (As an aside, it’s probably worth noting that I know absolutely nothing about hypergraphs!)

I’ve also started wondering about ‘director pathways’ in which we define directors as nodes (where all we require was that a person was a director of a company at some time) and directed “citation” edges. These edges would go from one director to other director nodes under the condition that the “citing” director was appointed to a particular company within a particular time period t1..t2 before the appointment to the same company of a “cited” director. If one director follows another director into more than one company, we increase the weight of the edge accordingly. (We could maybe also explore modes in which edge weights represent the amount of time that two directors are in the same company together.)