Via my feeds, I noticed this the other day: Google is pushing a new content-recommendation system for publishers, in which VentureBeat quoted a Google originated email sent to them: “Our engineers are working on a content recommendation beta that will present users relevant internal articles on your site after they read a page. This is a great way to drive loyal users and more pageviews.” Hmm.. what’s taken them so long?

(FWIW, use contextual ad-servers to serve content has been one of those ideas that I keep coming round to but never really pursuing:for example, Contextual Content Server, Courtesy of Google?, Google Banner Ads as On-Campus Signage? or Contextual Content Delivery on Higher Ed Websites Using Ad Servers.)

Reflecting on this, I started thinking again about the uses to which we might be able to put adservers. It struck me that one way is actually to use them to serve… ads. 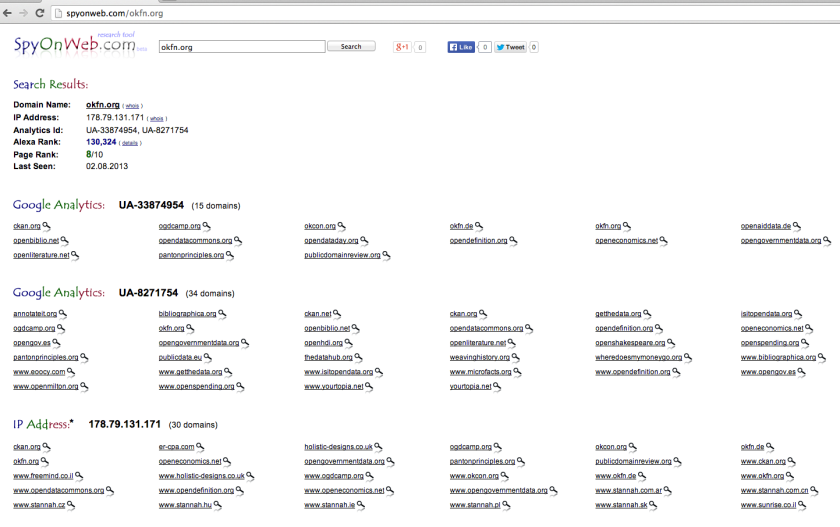 An emergent social positioning map around the School)fData twitter account also identifies a wealth of OKF related projects and local chapters (bottom region of the map), many of which will also run their own web presence:

One of the issues associated with such a widely dispersed and loosely coupled networked organisation relates to the running of campaigns, and promoting strong single campaign issue messages out across the various websites. So I wonder: would an internal adserver work???

… you define web sites, and for each website you then define one or more zones. A zone is a representation of a place on the web pages where the adverts must appear. For every zone, Revive Adserver generates a small piece of HTML code, which must be placed in the site at the exact spot where the ads must be displayed. …

You must also create advertisers, campaigns and advertisements …

The final step is to link the right campaigns to the right zones. This determines which ads will be displayed where. You can combine this with various forms of ‘targeting’, which means you can adjust the advertising to specific situations.

So…each website in the OKF sprawl could include a local adserver zone and display OKF ads. Such ads might be campaign related, or announcements of upcoming dates and events likely to be relevant across the OKF network (for example, internationl open data days, or open data census days).

Other ad blocks/zones could be defined to serve content from particular ad channels or campaigns.

Ad/content could in part be editorially controlled from the centre – for example, a campaign manager might be responsible for choosing which ads are in the pool for a particular campaign or set of campaigns. Site owners might allocate different zones that they can sign up to different ad channels that only serve ad/content on a particular theme?

Members of local groups and project teams could submit ads to the adserver relating to their projects or group activities, with associated campaign codes and topics so that content can be suitably targeted by the platform. The adserver thus also becomes a(nother) possible communications channel across the network.