I couldn’t get to sleep last night mulling over thoughts that had surfaced after posting Time to Drop Calculators in Favour of Notebook Programming?. This sort of thing: what goes on when you get someone to add three and four?

Part of the problem is associated with converting the written problem into mathematical notation:

For more complex problems it may require invoking some equations, or mathematical tricks or operations (chain rule, dot product, and so on).

Cast the problem into numbers then try to solve it:

That equals gets me doing some mental arithmetic. In a calculator, there’s a sequence of button presses, then the equals gives the answer.

In a notebook, I type:

that is, I write the program in mathematicalese, hit the right sort of return, and get the answer:

The mechanics of finding the right hand side by executing the operations on the left hand side are handled for me.

Try this on WolframAlpha: integral of x squared times x minus three from -3 to 4

I may be able to figure out the maths bit – figure out how to cast my problem into a mathematical statement – but not necessarily have the skill to solve the problem. I can get the method marks but not do the calculation and get the result. I can write the program. But running the programme, diving 3847835 by 343, calculating the square root of 26,863 using log tables or whatever means, that’s the blocker – that could put me off trying to make use of maths, could put me off learning how to cast a problem into a mathematical form, if all that means is that I can do no more than look at the form as if it were a picture, poem, or any other piece of useless abstraction.

So why don’t we help people see that casting the problem into the mathematical form is the creative bit, the bit the machines can’t do. Because the machines can do the mechanical bit: 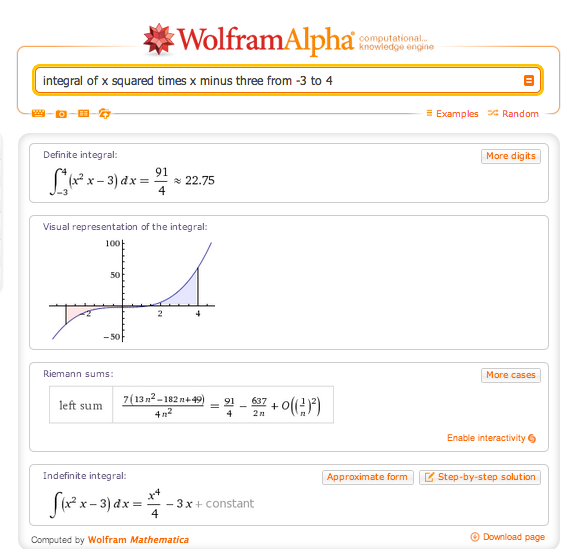 Maybe this is the approach that the folk over at Computer Based Math are thinking about (h/t Simon Knight/@sjgknight for the link), or maybe it isn’t… But I get the feeling I need to look over what they’re up to… I also note Conrad Wolfram is behind it; we kept crossing paths, a few years ago…I was taken by his passion, and ideas, about how we should be helping folk see that maths can be useful, and how you can use it, but there was always the commercial blocker, the need for Mathematica licenses, the TM; as in Computer-Based Math™.

Then tonight, another example of interactivity, wired in to a new “learning journey” platform that again @sjgknight informs me is released out of Google 20% time…: Oppia (Oppia: a tool for interactive learning).

The radio button choice determines where we go next on the learning journey:

What happens if I make a mistake?

History of what I did wrong, inline, which is richer than a normal notebook style, where my repeated attempts would overwrite previous ones…

Depending how many common incorrect or systematic errors we can identify, we may be able to add richer diagnostic next step pathways…

..but then, eventually, success:

The platform is designed as a social one where users can create their own learning journeys and collaborate on their development with others. Licensing is mandated as “CC-BY-SA 4.0 with a waiver of the attribution requirement”. The code for the platform is also open.

The learning journey model is richer and potentially far more complex in graph structure terms than I remember the attempts developed for the [redacted] SocialLearn platform, but the vision appears similar. SocialLearn was also more heavily geared to narrative textual elements in the exposition; by contrast, the current editing tools in Oppia make you feel as if using too much text is not a Good Thing.

So – how are these put together… The blurb suggests it should be easy, but Google folk are clever folk (and I’m not sure how successful they’ve been getting their previous geek style learning platform attempts into education)… here’s an example learning journey – it’s a state machine:

Each block can be edited:

When creating new blocks, the first thing you need is some content:

and some you might not. For example, these are the interactive/executable coding style blocks you can use:

There’s also a map input, though I’m not sure what dialogic information you can get from it when you use it?

After the interaction definition, you can define a set of rules that determine where the next step takes you, depending on the input received.

The rule definitions allow you to trap on the answer provide by the interaction dialogue, optionally provide some feedback, and then identify the next step.

The rule branches are determined by the interaction type. For radio buttons, rules are triggered on the selected answer. For text inputs, simple string distance measures:

For the map, what looks like a point within a particular distance of a target point? 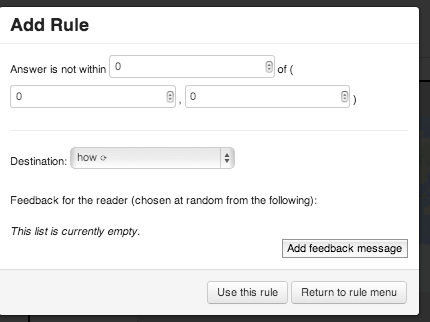 The choice of programming languages currently available in the code interaction type kinda sets the tone about who might play with this…but then, maybe as I suggested to colleague Ray Corrigan yesterday, “I don’t think we’ve started to consider consequences of 2nd half of the chessboard programming languages in/for edu yet?”

All in all – I don’t know… getting the design right is what’ll make for a successful learning journey, and that’s not something you can necessarily do quickly. The interface is as with many Google interfaces, not the friendliest I’ve seen (function over form, but bad form can sometimes get in the way of the function…).

I was interested to see they’re calling the learning journeys explorations. The Digital Worlds course I ran some time ago used that word too, in the guise of Topic Explorations, but they were a little more open ended, and used a question mechanic used to guide reading within a set of suggested resources.

Anyway, one to watch, perhaps, erm, maybe… No badges as yet, but that would be candy to offer at the end of a course, as well as a way of splashing your own brand via the badges. But before that, a state machine design mountain to climb…

One thought on “Oppia – A Learning Journey Platform From Google…”