Just like the way VLEs locked down what those who wanted to try to stuff out could do with educational websites, usually on the grounds of “security”, so a chunk of lightweight functionality with possible educational value that I was about to start to exploring inside IPython notebooks has been locked out by the new IPython notebook security policy:

Affected use cases
Some use cases that work in IPython 1.0 will become less convenient in 2.0 as a result of the security changes. We do our best to minimize these annoyance, but security is always at odds with convenience.

Javascript and CSS in Markdown cells
While never officially supported, it had become common practice to put hidden Javascript or CSS styling in Markdown cells, so that they would not be visible on the page. Since Markdown cells are now sanitized (by Google Caja), all Javascript (including click event handlers, etc.) and CSS will be stripped.

Here’s what I’ve been exploring – using a simple button:

to reveal an answer:

It’s a 101 interaction style in “e-learning” (do we still call it that?!) and one that I was hoping to explore more given the interactive richness of the IPython notebook environment.

Here’s how I implemented it – a tiny bit of Javascript hidden in one of the markdown cells:

and then a quick call from a button onclick event handler to reveal the answer block:

This won’t work anymore – and I don’t have the time to learn whether custom CSS can do this, and if so, how. 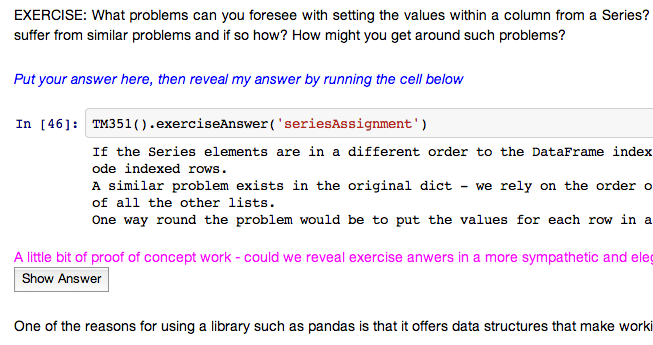 That is, putting answers into a python library and then using code to pull the text answer in…

Note also the use of colour in the cells – this is something else I wanted to try to explore, the use of styling to prompt interactions; in the case of IPython notebooks, I quite like the idea of students taking ownership of the notebooks and adding content to it, whether by adding commentary text to cells we have written in, adding their own comment cells (perhaps using a different style – so a different cell type?), amending code stubs we have written, adding in their own code, perhaps as code complements to comment prompts we have provided, etc etc.

The quick hack, try and see option that immediately came to mind to support these sorts of interaction seems to have been locked out (or maybe not – rather than spending half an hour on a quick hack I’ll have to spend have an hour reading docs…). This is exactly the sort of thing that cuts down on our ability to mix ideas and solutions picked up from wherever, and just try them out quickly; and whilst I can see the rationale, it’s just another of those things to add to the when the web was more open pile. (I was going to spend half an hour blogging a post to let other members of the course team I’m on know how to add revealed answers to their notebooks, but as I’ve just spent 18 hours trying to build a VM box that supports python3 and the latest IPythion notebook, I’m a bit fed up at the thought of having to stick with the earlier version py’n’notebook VM I built because it’s easier for us to experiment with…)

I have to admit that some of the new notebook features look like they could be interesting from a teaching point of view in certain subject areas – the ability to publish interactive widgets where the controls talk to parameters accessed via the notebook code cells, but that wasn’t on my to do list for the next week…

What I was planning to do was explore what we’d need to do to get elements of the notebook behaving like elements in OU course materials, under the assumption that our online materials have designs that go hand in hand with good pedagogy. (This is a post in part about OU stuff, so necessarily it contains the p-word.) 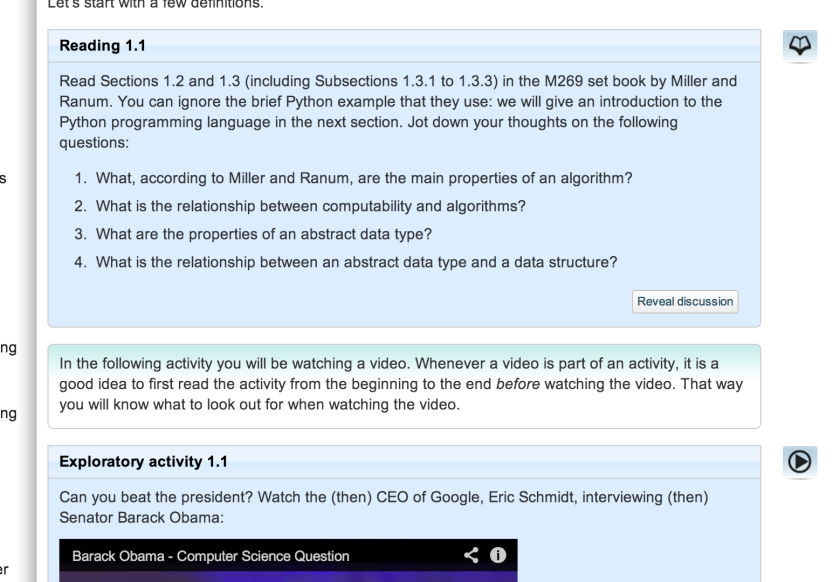 Something else on the to do list was to explore how to tweak the branding of the notebook, for example to add in an OU logo or (for my other day per week), a School of Data logo. (I need to check the code openness status of IPython notebooks… How bad form would it be to remove the IPy logo for example? And where should a corporate log go? In the toolbar, or at the top of the content part of the notebook? If you just contribute content, I guess the latter; if you add notebook functionality, maybe the topbar is okay?)

There are a few examples of styling notebooks out there, but I wonder – will those recipes still work?

Ho hum – this post probably comes across as negative about IPython notebooks, but it shouldn’t because they’re a wonderful environment (for example, Doodling With IPython Notebooks for Education and Time to Drop Calculators in Favour of Notebook Programming?). I’m just a bit fed up that after a couple of days graft I don’t get to have half and hour’s fun messing around with look and feel. Instead, I need to hit the docs to find out what’s possible and what isn’t because the notebooks are no longer an open environment as they were… Bah..:-(