As a technology optimist, I don’t tend to go in so much for writing up long critical pieces about tech (i.e. I don’t do the “proper” academic thing), instead preferring to spend time trying to work out how make use of it, either on its own or in tandem with other technologies. (My criticality is often limited to quickly ruling out things I don’t want to waste my time on because they lack interestingness, or in spending time how to appropriate one thing to do something it perhaps wasn’t intended to do originally.)

I also fall in to the camp of lacking in confidence about things other people think I know about, generally assuming there are probably “proper” ways of doing things for someone properly knowledgeable in a tradition, although I don’t know what they are. (Quite where this situates me on a scale of incompetence, I’m not sure… e.g. Why the Unskilled Are Unaware: Further Explorations of (Absent) Self-Insight Among the Incompetent h/t @Downes).

A couple of days ago, whilst doodling with a data-to-text notebook (the latest incarnation of which can be found here) I idly asked @fantasticlife whether it was an example of data journalism (we’ve been swapping links about bot-generated news reports for some time), placing it also in the context of The Changing Task Composition of the US Labor Market: An Update of Autor, Levy, and Murnane (2003), David H. Autor & Brendan Price,June 21, 2013, and in particular this chart about the decline in work related “routine cognitive tasks”: 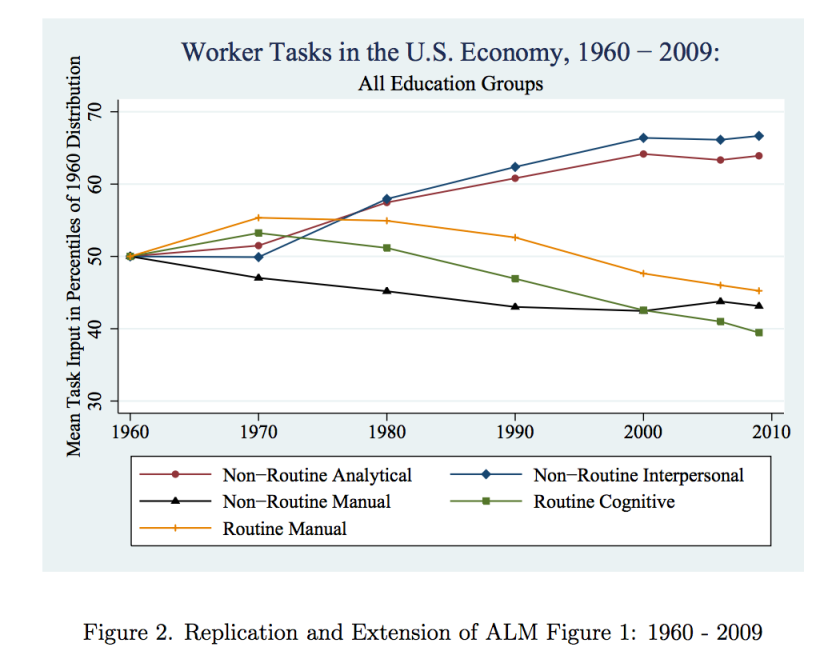 His response? “No, that’s data reporting”.

So now I’m wondering: how do data reporting and data journalism differ? And to what extent is writing some code along the lines of:

to produce text from nomis data of the form:

Does it become “more journalistic” if the text generating procedure comments on the magnitude of the changes? For example, using something like:

to produce further qualified text (in terms of commenting on the magnitude of the amount) that can take a variety of slightly different forms?

In the context of routine cognitive tasks – such as the task of reporting the latest JSA figures in this town or that city – is this sort of automation likely? Is it replacing one routine cognitive task with another, or is it replacing it with a “non-routine analytical task”? Might it a be a Good Thing, allowing the ‘reporting’ to be done automatically, at least in draft form, and freeing up journalists to do other tasks? Or a Bad Thing, replace a routine, semi-skilled task by automation? To what extent might the algorithms so embed more intelligence and criticism, for example, automatically flagging up figures that are “interesting” in some way? (Would that be algorithmic journalism? Or would it be more akin to an algorithmic stringer?)