Last night I saw a mention of a budget review consultation being held by the Milton Keynes Council. I’ve idly wondered before about whether spending data could be used to inform these consultations, for example by roleplaying what the effects of a cut to a particular spending area might be at a transactional level. (For what it’s worth, I’ve bundled together the Milton Keynes spending data into a single (but uncleaned) CSV file here and posted the first couple of lines of a data conversation with it here. One of the things I realised is that I still don’t know how to visualise data by financial year, so I guess I need to spend some time looking at pandas timeseries support).

Another transparency/spending data story that caught my eye over the break was news of how Keighley Town Council had been chastised for its behaviour around various transparency issues (see for example the Audit Commission Report in the public interest on Keighley Town Council). Among other things, it seems that the council had “entered into a number of transactions with family members of Councillors and employees” (which makes me think that an earlier experiment I dabbled with that tried to reconcile councillor names with: a) directors of companies in general; b) directors of companies that trade with a council may be a useful tool to work up a bit further). They had also been lax in ensuring “appropriate arrangements were in place to deal with non-routine transactions such as the recovery of overpayments made to consultants”. I’ve noted before that where a council publishes all its spending data, not just amounts over £500, including negative payments, there may be interesting things to learn (eg Negative Payments in Local Spending Data).

It seems that the Audit Commission report was conducted in response to a request from a local campaigner (Keighley investigation: How a grandmother blew whistle on town council [Yorkshire Post, 20/12/14]). As you do, I wondered whether the spending data might have sent up an useful signals about any of the affairs the auditors – and local campaigners – took issue with. The Keighley Town Council website doesn’t make it obvious where the spending data can be found – the path you need to follow is Committees, then Finance and Audit, then Schedule of payments over £500 – and even then I can’t seem to find any data for the current financial year.

The data itself is published using an old Microsoft Office .doc format:

The extent of the data that is published is not brilliant… In terms of usefulness, this is pretty low quality stuff… 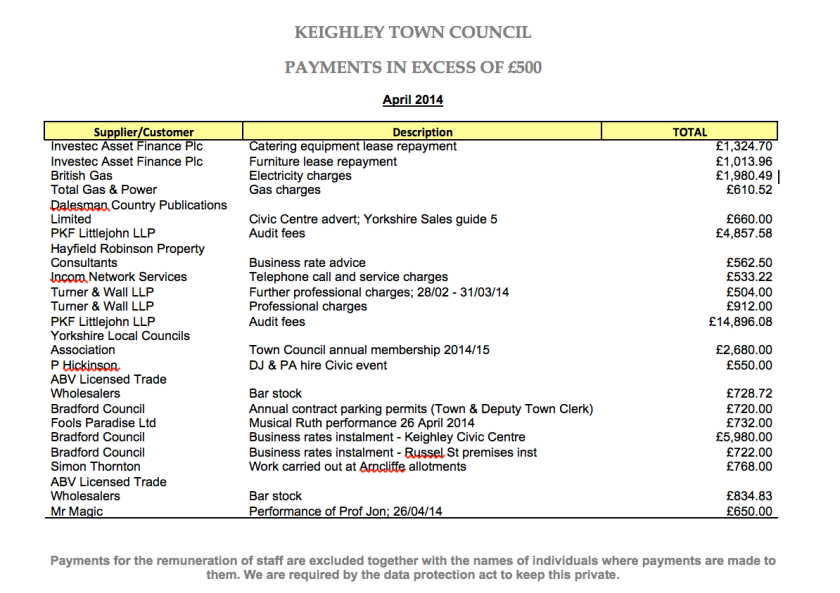 Getting the data, such as it is, into a canonical form is complicated by the crappy document format, though it’s not hard to imagine how such a thing came to be generated (council clerk sat using an old Pentium powered desktop and Windows 95, etc etc ;-). Thanks to a tip off from Alex Dutton, unoconv can convert the docs into a more usable format (apt-get update ; apt-get install -y libreoffice ; apt-get install -y unoconv); so for example, unoconv -f html 2014_04.doc converts the specified .doc file to an HTML document. (I also had a look at getting convertit, an http serverised version of unoconv, working in a docker container, but it wouldn’t build properly for me? Hopefully a tested version will appear on dockerhub at some point…:-)

PS I’m wondering if it would be useful to skim through some of the Audit Commission’s public interest reports to fish for ideas about interesting things to look for in the spending data?