Trying to clear my head of code on a dog walk after a couple of days tinkering with the nomis API and I started to ponder what an API is good for.

Chris Gutteridge and Alex Dutton’s open data excuses bingo card and Owen Boswarva’s Open Data Publishing Decision Tree both suggest that not having an API can be used as an excuse for not publishing a dataset as open data.

So what is an API good for?

It doesn’t of course, because folk actually want this…

Which is not necessarily that easy even with an API:

For a variety of reasons…

Even when the discovery part is done and you think you have a reasonable idea of how to call the API to get the data you want out of it, you’re still faced with the very real practical problem of how to actually get the data in to the analysis environment in a form that is workable on in that environment. Just because you publish standards based SDMX flavoured XML doesn’t mean anything to anybody if they haven’t got an “import from SDMX flavoured XML directly into some format I know how to work with” option. 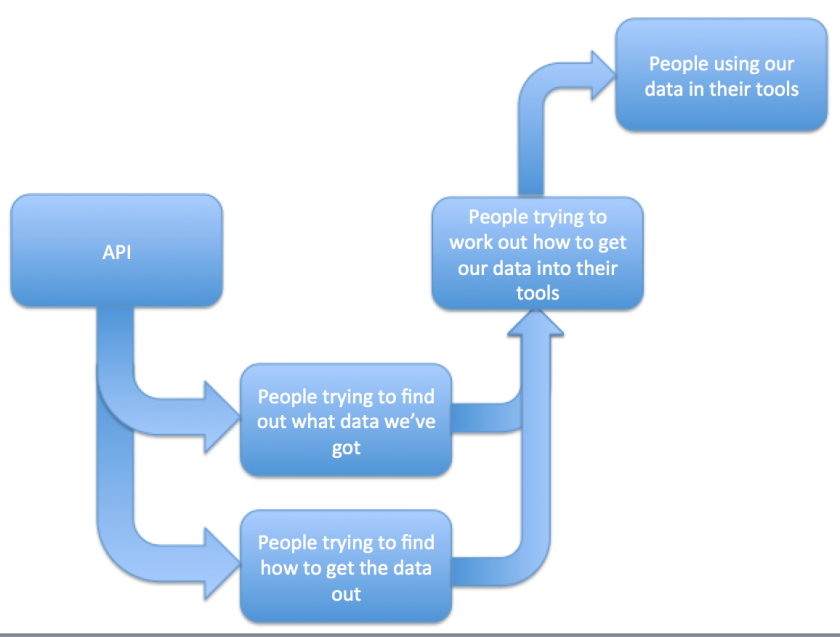 And even then, once the data is in, the problems aren’t over…

(I’m assuming the data is relatively clean and doesn’t need any significant amount of cleaning, normalising, standardising, type-casting, date par;-sing etc etc. Which is of course likely to be a nonsense assumption;-)

So what is an API good for, and where does it actually exist?

I’m starting to think that for many users, if there isn’t some equivalent of an “import from X” option in the tool they are using or environment they’re working in, then the API-for-X is not really doing much of a useful job for them.

Also, if there isn’t a discovery tool they can use from the tool they’re using or environment they’re working in, then finding data from service X turns into another chore that takes them out of their analysis context and essentially means that the API-for-X is not really doing much of a useful job for them.

What I tried to do in doodling the Python / pandas Remote Data Access Wrapper for the Nomis API for myself create some tools that would help me discover various datasets on the nomis platform from my working environment – an IPython notebook – and then fetch any data I wanted from the platform into that environment in a form in which I could immediately start working with it – which is to say, typically as a pandas dataframe.

I haven’t started trying to use it properly yet – and won’t get a chance to for a week or so at least now – but that was the idea. That is, the wrapper should support a conversation with the discovery and access parts of the conversation I want to have with the nomis data from within my chosen environment. That’s what I want from an API. Maybe?!;-)

APIs for users – not programmers. That’s what I want from an API.

See also: Opening Up Access to Data: Why APIs May Not Be Enough….

PS See also this response from @apievangelist: The API Journey.