A couple of handy tricks when working with ggplot that had escaped my radar until today.

First up, I had a problem in a function I was using to generate a ggplot2 in which I wanted to accept a couple of optional arguments in to the function and then make use of them in a ggplot aes() element.

Normally, ggplot will try to dereference a variable as a column in the current ggplot data context, rather than as a variable in it’s own right. So what can we do? Hack around aith aes_string()? In actual fact, the following trick identified via Stack Overflow did exactly what I needed – make a particular environment context available in ggplot directly:

By the by, the complete version of the fragment above generates a chart like the, heavily influenced by Tufte style slopegraphs, which shows progression through the F1 qualifying session in China this weekend: 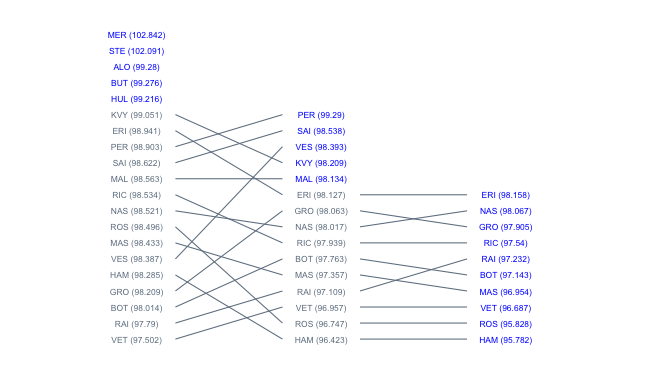 Note that I use a discrete rank rather than continuous laptime scale for the y-axis, which would be more in keeping with the original slope graph idea. (The f1datajunkie.com post on F1 China 2015 – How They Qualified explores another chart type where continuous laptime scales are used, and a two column layout reminiscent of an F1 grid as a trick to try to minimise overlap of drivername labels, along with a 1-dimensional layout that shows all the qualifying session classification laptimes.)

The second useful trick I learned today was a recipe for saving chart objects. (With sales of the Wrangling F1 Data With R book (which provides the context for my learning these tricks) all but stalled, I need a new dream to live for that gives me hope of making enough from F1 related posts to cover the costs of seeing a race for real one weekend, so I’ve started wondering whether I could sell or license particular charts one day (if I can produce them quickly enough), either as PDFs or, perhaps, as actual chart objects, rather than having to give away all the code and wrangled data, for example….

So in that respect, the ability to save ggplot chart objects and then share them in a way that others can use them (if they have a workflow that can accommodate R/grid grobs) could be quite attractive… and this particular trick seems to do the job…