Two or three weeks ago, whilst in Cardiff, I noticed one of these things for the first time: 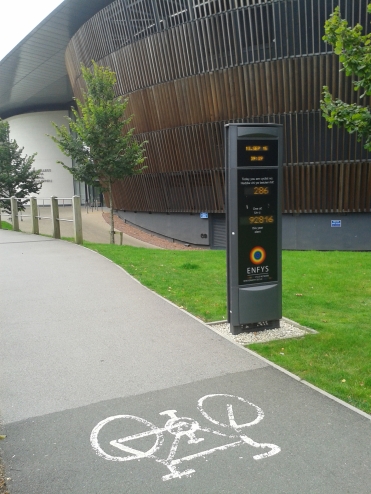 It’s counts the number of cyclists who pass by it and is a great example of the sort of thing that could perhaps be added to a “data walk”, along with several other examples of data revealing street furniture as described by Leigh Dodds in Data and information in the city.

It looks like could be made by a company called Falco – this Falco Cycle Counter CB650 (“[a]lready installed for Cardiff County Council as well as in Copenhagen and Nijmegen”)? (Falco also make another, cheaper one, the CB400.)

The purpose of the Falco Cycle Counter is to show the number of cyclists on a bicycle path. It shows the number of cyclists per day and year. At the top of the Counter there is a clock indicating time and date. On the reverse it is possible to show city map or other information, alternatively for a two-way bicycle path it is possible to have display on both side of the unit. Already installed for Cardiff County Council as well as in Copenhagen and Nijmegen, three very strong cycling areas, the cycle counter is already proving to be an effective tool in managing cycle traffic.

As with many of these sorts of exhibit, it can phone home:

When configured as a Cycle Counter, the GTC can provide a number of functions depending on the configuration of the Counter. It is equipped with a modem for a SIM card use which provides a platform for mobile data to be exported to a central data collection system.

This makes possible a range of “on-… services”, for example: [g]enerates individual ‘buy-in’ from local people via a website and web feed plus optional Twitter RSS enabling them to follow the progress of their own counter personally.

I was reminded of this appliance (and should really have blogged it sooner) by a post today from Pete Warden – Semantic Sensors – in which he remarked on spotting an article about “people counters” in San Francisco that count passing foot traffic.

In that case, the counters seem to be provided by a company called Springboard who offer a range of counting services using a camera based counting system: a small counting device … mounted on either a building or lighting/CCTV column, a virtual zone is defined and pedestrians and cars who travel through the zone are recorded.

Visitor numbers are recorded using the very latest counting software based on “target specific tracking”. Data is audited each day by Springboard and uploaded daily to an internet server where it is permanently stored.

Target specific tracking software monitors flows by employing a wide range of characteristics to determine a target to identify and track.

Here’s an example of how it works:

As Pete Warden remarked, [t]raditionally we’ve always thought about cameras as devices to capture pictures for humans to watch. People counters only use images as an intermediate stage in their data pipeline, their real output is just the coordinates of nearby pedestrians.

Right now this is a very niche application, because the systems cost $2,100 each. What happens when something similar costs $2, or even 20 cents? And how about combining that price point with rapidly-improving computer vision, allowing far more information to be derived from images?

Those trends are why I think we’re going to see a lot of “Semantic Sensors” emerging. These will be tiny, cheap, all-in-one modules that capture raw noisy data from the real world, have built-in AI for analysis, and only output a few high-level signals.

For all of these applications, the images involved are just an implementation detail, they can be immediately discarded. From a systems view, they’re just black boxes that output data about the local environment.

Using cameras to count footfall appears to be nothing new – for example, the Leeds Data Mill openly publish Leeds City Centre footfall data collected by the council from “8 cameras located at various locations around the city centre [which monitor]numbers of people walking past. These cameras calculate numbers on an hourly basis”. I’ve also briefly mentioned several examples regarding the deployment of related technologies before, for example The Curse of Our Time – Tracking, Tracking Everywhere.

From my own local experience, it seems cameras are also being used (apparently) to gather evidence about possible “bad behaviour” by motorists. Out walking the dog recently, I noticed a camera I hadn’t spotted before: 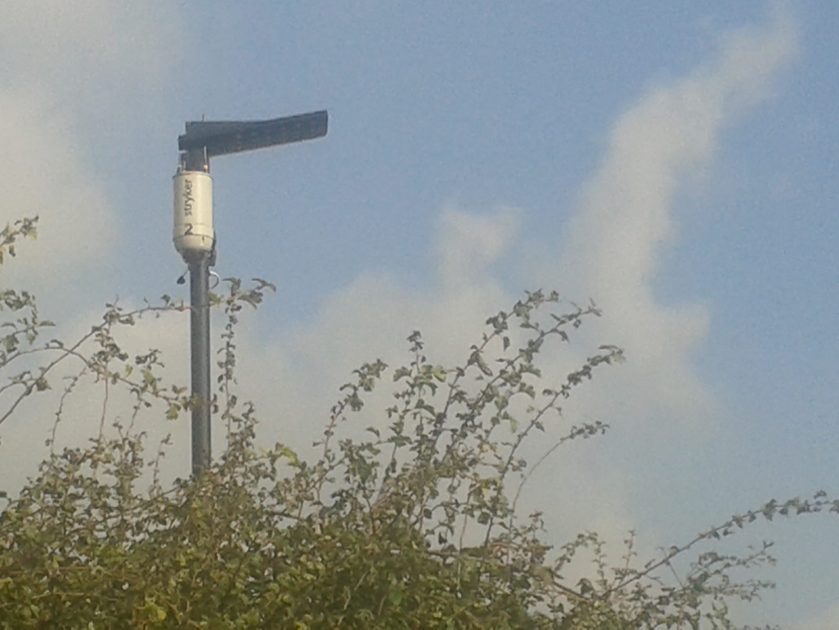 It’s situated at the start of a hedged both sides footpath that runs along the road, although the mounting suggests that it doesn’t have a field of view down the path. Asking in the local shop, it seems as if the camera was mounted to investigate complaints of traffic accelerating off the mini-roundabout and cutting-up pedestrians about to use the zebra-crossing: (I haven’t found any public consultations about mounting this camera, and should really ask a question, or even make an FOI request, to clarify by what process the decision was made to install this camera, when it was installed, for how long, for what purpose, and whether it could be used for other ancillary purposes.)

On a slightly different note, I also note from earlier this year that Amazon acquired internet of things platform operator 2lemetry, “an IoT version of Enterprise Application Integration (EAI) middleware solutions, providing device connectivity at scale, cross-communication, data brokering and storage”, apparently. In part, this made me think of an enterprise version of Pachube, as was (now Xively?).

So is Amazon going to pitch against Google (in the form of Nest), or maybe Apple, perhaps building “home things” services around a home hub server? After all, they have listening connected voice for your home already in the form of the voice controlled Amazon Echo (a bit like a standalone Siri, Cortana or Google Now). (Note to self: check out the Amazon Amazon Alexa Voice Services Developer Kit some time…)

As Pete Warden concluded, it seems obvious to me that machine vision is becoming a commodity“. What might we expect as and when listening and voice services also become a commodity?

Related: a recent article from the Guardian posing the question What happens when you ask to see CCTV footage?, as is your right by making a subject access request under the Data Protection Act, picks up on a recently posted paper by OU academic Keith Spiller: Experiences of accessing CCTV data: the urban topologies of subject access requests.

3 thoughts on “We Are Watching, and You Will be Counted”