A couple of news stories came to my attention today, one via a news stand, one via a BBC news report that – it turns out – was recapitulating an earlier story.

Both of them demonstrate how you the user of the online service are only a “valued customer” insofar as you help generate revenue.

In the first case, it seems that Amazon – doyens of good employment and tax practice, ahem – are going to start suing folk who publish fake reviews on the site. 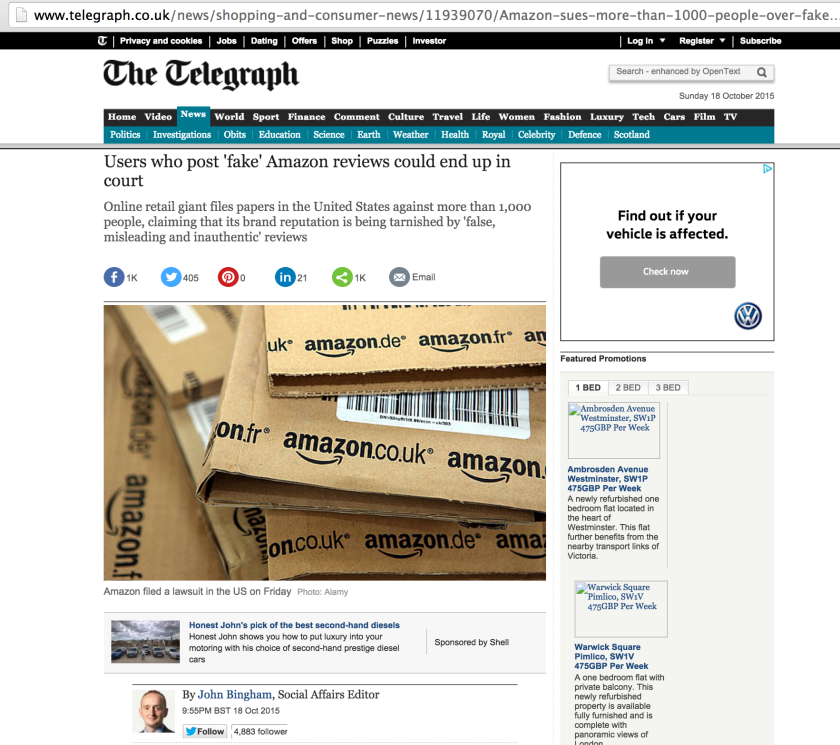 Ah, bless… Amazon fighting on behalf of the consumer…

A more timely report – including a copy of the complaint – is posted on Geekwire.

Apparently, “[d]efendants are misleading Amazon’s customers and tarnishing Amazon’s brand for their own profit and the profit of a handful of dishonest sellers and manufacturers. Amazon is bringing this action to protect its customers from this misconduct, by stopping defendants and uprooting the ecosystem in which they participate.”.

It seems that each reviewer of a product has agreed to and is bound by the Conditions of Use of the Amazon site, so I guess that before posting a review, we should all be reading the Ts & Cs… Of course, Amazon ensures that folk using any of its websites have read – and understood – all the terms and conditions of the relevant site. Ahem, again… Cough, splutter, choke….

In case you’re interested, here are the US Terms and Conditions, under acceptance of which “you agree that the Federal Arbitration Act, applicable federal law, and the laws of the state of Washington” apply, presumably because even though Amazon is a Delaware corporation, (not that Delaware not being the most transparent of jurisdictions is likely to have anything to do with that?!) its principal place of business in Seattle, Washington. Sort of. In the UK, for example, which is to say the EU, it’s based in Luxembourg, presumably to help its tax position…? It must be nice being a big enough company to choose what jurisdiction to put what part of your business in, so you can, erm, maximise the benefits…

Although the current case is playing out against Amazon.com users, in case you’re interested, here are the UK Ts & Cs. Read and digest… Remember: you almost undoubtedly signed up to them… Ahem…

(Another by the by on partially related matters – it seems like if you work for Facebook in the UK, business has been good and you can expect a pretty good bonus, but if you’re a member of HM’s Inland Revenue, there’s not been that much business as far as tax is concerned (Facebook paid £4,327 corporation tax despite £35m staff bonuses). In passing, I wonder if Facebook pay the cleaning and ancillary staff that service Facebook’s UK premises a living wage, or whether we should be sleeping happy that soon enough these employees won’t be receiving as much “UK taxpayer’s money” in the form of (soon to be cut) working tax credits, that form of corporate welfare payment used to support companies at state expense, in lieu of them paying a reasonable wage (even leaving tax affairs aside)…) I’m not sure who’s taking the p**s more – international corporations or UK Gov…?

Here’s the root of the second story that caught my eye, in which it seems that successful online gamblers are deemed persona non grata if they’re no longer “revenue positive”, or whatever the phrase is. 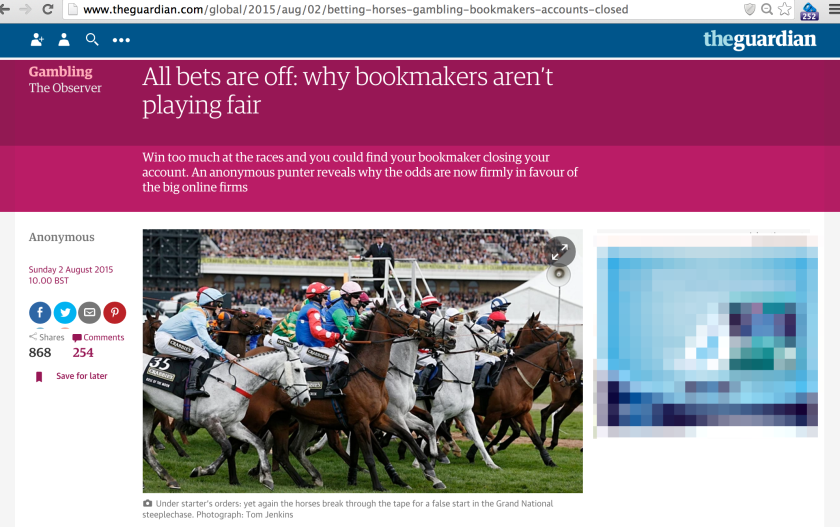 So bear in mind that when companies collect your personal data, the benefit that they ultimately want to derive is to the company, not to you, the individual user. Sucker…

One thought on “When Your Identity Can Be Used Against You…”