Want to learn to code but never got round to it? The next presentation of OUr FutureLearn course Learn to Code for Data Analysis will teach you how to write you own programme code, a line a time, to analyse real open data datasets. The next presentation starts on 6 June, 2016, and runs for 4 weeks, and takes about 5 hrs per week.

I’ve often thought that there are several obstacles to getting started with programming. Firstly, there’s the rationale or context: why bother/what could I possibly use programming for? Secondly, there are the practical difficulties: to write and execute programmes, you need to get an programming environment set up. Thirdly, there’s the so what: “okay, so I can programme now, but how do I use this in the real world?”

Many introductory programming courses reuse educational methods and motivational techniques or contexts developed to teach children (and often very young children) the basics of computer programming to set the scene: programming a “turtle” that can drive around the screen, for example, or garishly coloured visual programming environments that let you plug logical blocks together as if they were computational Lego. Great fun, and one way of demonstrating some of the programming principles common to all programming languages, but they don’t necessarily set you up for seeing how such techniques might be directly relevant to an IT problem or issue you face in your daily life. And it can be hard to see how you might use such environments or techniques at work to help you get perform real tasks… (Because programmes can actually be good at that – automating the repetitive and working through large amounts of stuff on your behalf.) At the other extreme are professional programming environments, like geekily bloated versions of Microsoft Word or Excel, with confusing preference setups and menus and settings all over the place. And designed by hardcore programmers for hardcore programmers.

So the approach we’ve taken in the OU FutureLearn course Learn to Code for Data Analysis is slightly different to that.

The course uses a notebook style programming environment that blends text, programme code, and the outputs of running that code (such as charts and tables) in a single, editable web page accessed via your web browser. 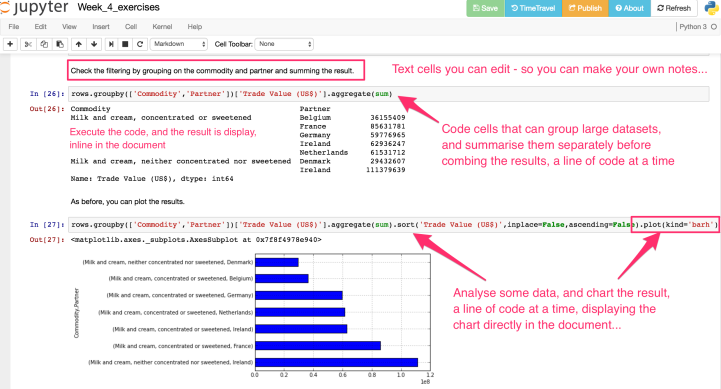 To motivate your learning, we use real world, openly licensed data sets from organisations such as the World Bank and the United Nations – data you can download and access for yourself – that you can analyse and chart using your own programme code. A line at a time. Because each line does it’s own thing, each line is useful, and you can see what each line does to your dataset directly.

So that’s the rationale: learn to code so you can work with data (and that includes datasets much larger than you can load into Excel…)

But what about the “so what”? Well, the language you’ll be learning is Python, a widely used language programming language that makes it ridiculously easy to do powerful things.

But not that easy, perhaps..?!

The environment you’ll be using – Jupyter notebooks – is also a “real world” technology, inspired as an open source platform for scientific computing but increasingly being used by journalists (data journalism, anyone?) and educators. It’s also attracted the attention of business, with companies such as IBM supporting the development of a range of interactive dashboard tools and backend service hooks that allow programmes written using the notebooks to be deployed as standalone online interactive dashboards.

The course won’t take you quite that far, but it will get you started, and safe in the knowledge that whatever you learn, as well as the environment you’re learning in, can be used directly to support your own data analysis activities at work, or at home as a civically minded open data armchair analyst.

So what are you waiting for? Sign up now and I’ll see you in the comments:-)

3 thoughts on “Want to Get Started With Open Data? Looking for an Introductory Programming Course?”