For the first time in way too long, I went to a data dive over the weekend, facilitated by DataKind on behalf of Global Witness, for a couple of days messing around with the UK Companies House  Significant Control (“beneficial ownership”) register.

One of the data fields in the data set is the nationality of a company’s controlling entity, where that’s a person rather than a company. The field is a free text one, which means that folk completing a return have to write their own answer in to the box, rather than selecting from a specified list.

The following are the more popular nationalities, as declared… 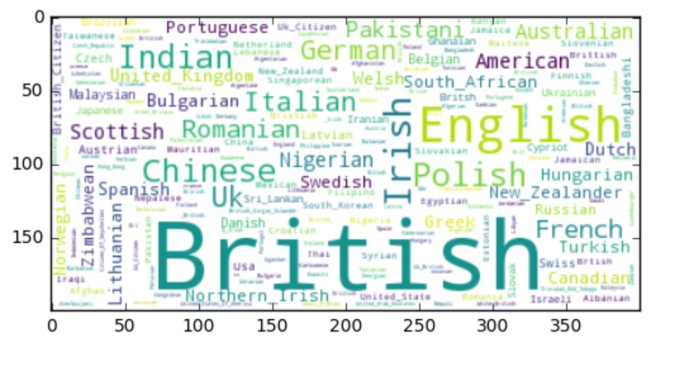 Note that “English” doesn’t count – for the moment, the nationality should be declared as “British”…

And some less popular ones  – as well as typos…:

So how can we start to clean this data?

One the libraries I discovered over the weekend was fuzzyset, that lets you add “target” strings to a set and then do a fuzzy match retrieval from the set using a word or phrase you have been provided with.

The UK Foreign & Commonwealth Office register of country names, a register that lists formalised country names for use in government, also includes nationalities – so maybe we can use that?

Adding the FCO nationalities to a  fuzzyset list, and then matching nationalities from the significant control register against those nationalities, gives a glimpse into the cleanliness (or otherwise!) of the data. For example, here’s what was matched against “British”:

In passing, English matched best with Bangladeshi, so we maybe need to tweak the lookup somewhere, perhaps adding English, Scottish, Northern Irish, Welsh, and maybe the names of UK counties, into the fuzzyset, and then in post-processing mapping from these to British?

Also by the by, word had it that Companies House didn’t consider there to be any likely significant data quality issues with this field… so that’s alright then….

Sorry, something went wrong. Reload?
Sorry, we cannot display this file.
Sorry, this file is invalid so it cannot be displayed.
view raw
countrymatch.ipynb
hosted with ❤ by GitHub

5 thoughts on “What Nationality Did You Say You Were, Again?”