A quick round up of things I would have made time to try to play with in the past, but that I can’t get motivated to explore, partly because there’s nowhere I can imagine using it, and partly because, as blog traffic to this blog dwindles, there’s no real reason to share. So there here just as timeline markers in the space of tech evolution, if nothing else.

Play With Docker Classroom provides an online interactive playground for getting started playing with classroom. A ranges of tutorials guide you through the commands you need to run to explore the Docker ecosystem and get your own demo services up and running.

You’re provided with a complete docker environment, running in the cloud (so no need to install anything…) and it also looks as if you can go off-piste. For example, I set one of my own OpenRefine containers running:

…had a look at the URL used to preview the hosted web services launched as part of one of the official tutorials, and made the guess that I could change the port number in the subdomain to access my own OpenRefine container…

Suspecting once again I’ve been as-if sent to Coventry by the rest of my department, one of the few people that still talks to me in the OU tipped me off to the online hosted Python Anywhere environment. The free plan offers you a small hosted Python environment to play with, accessed via a browser IDE, and that allows you to run a small web app, for example. There’s a linked MySQL database for preserving state, and the ability to schedule jobs – so handy for managing the odd scraper, perhaps (though I’m not sure what external URLs you can access?) 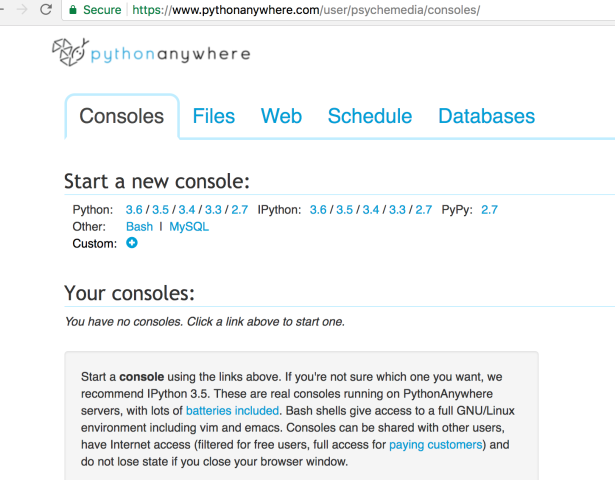 The relatively cheap (and up) paid for accounts also offer a Jupyter notebook environment – it’s interesting this isn’t part of the free plan, which makes me wonder if that environment works as an effective enticement to go for the upgrade?

The Python Anywhere environment also looks as if it’s geared up to educational use – student’s signing up to the service can nominate another account as their “teacher”, which allows the teacher to see the student files, as well as get a realtime shared view of their console.

(Methinks it’d be quite interesting to have a full feature by feature comparison of Python Anywhere and CoCalc (SageMathCloud, as was…)

Amazon Web Services (AWS) Service Application Model (SAM) describes a way of hosting serverless applications using Amazon Lambda functions. A recent blogpost describes a local Docker testing environment that allows you to develop and test SAM compliant applications on your local machine and then deploy them to AWS. I always find working with AWS a real pain to set up, so if being able to develop and test locally means I can try to get apps working first and then worry about negotiating the AWS permissions and UI minefield if I ever want to try to actually run the thing on AWS, I may be more likely to play a bit with AWS SAM apps…

On my to do list is writing some updated teaching material on neural networks. As part of the “research” process, I keep meaning to give some of the more popular deep learning models – PyTorch, Tensorflow and ConvNet, perhaps – a spin, to see if we can simplify them to an introductory teaching level.

A first thing to do is evaluate the various playgrounds and demos, such as the Tensorflow NeuralNetwork Playground:

Another, possibly more useful, approach might be to start with some of the “train a neural network in your browser” Javascript libraries and see how easy it is to put together simple web app demos using just those libraries. 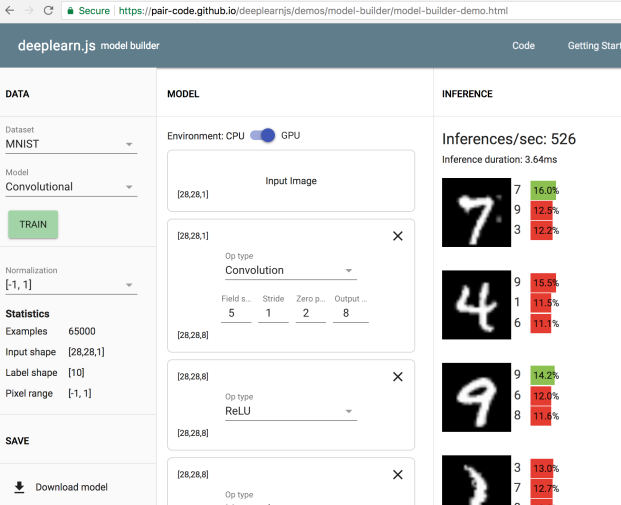 The LearnR package is a new-ish package for developing interactive tutorials in RStudio. (Hmmm… I wonder if the framework lets you write tutorial code using language kernels other than R?)

Just as Jupyter notebooks provided a new sort of interactive environment that I don’t think we have even begun to explore properly yet as an interactive teaching and learning medium, I think this could take a fair bit of playing with to get a proper feel for how to do things most effectively. Which isn’t going to happen, of course.

“Reactive Web Apps for Python”, apparently… This perhaps isn’t so much of interest as an ed tech, but it’s something I keep meaning to play with as a possible Python/Jupyter alternative to R/Shiny.