One of the issues I keep coming up against when trying to encourage folk to at least give Jupyter notebooks a try is that “it’s too X to install” (for negatively sentimented X…). One way round this is to use something like Binder, which allows you to create a Docker image from the contents of a public Github repository and run a container instance from that image on somebody else’s server, accessing the notebook running “in the cloud” via your own browser. A downside to this approach is that the public binder service can be a bit slow – and a bit flaky. And it probably doesn’t scale well if you’re running a class. (Institutions running their own elastic Binder service could work round this, of course…)

So here’s yet another possible way in for folk – O’Reilly Media’s LaunchBot (via O’Reilly Media CTO Andrew Odewahn’s draft article Computational Publishing with Jupyter) – though admittedly it also requires the possibly (probably?!)  “too hard” requirement to install Docker as a pre-requisite. Which means it’s possibly doomed from the start in my institution…

Anyway, for anyone not in a Computing HE department, and who’s willing to install Docker first (it isn’t really hard at all unless your IT department has got their hands on your computer first: just download the appropriate Community Edition for your operating system (Mac, Windows, Linux) from here), the LaunchBot app provides a handy way to run Jupyter environments in a custom Docker container, “preloaded” with notebooks from a public Github repo.

By the by, if you’re on a Mac, you may be warned off installing LaunchBot.

Simply select the app in a Finder window, right click on it, and then select “Open” from the pop-up menu; agree that you do want to launch it, and it should run happily thereafter.

In a sense, LaunchBot is a bit like running a personal Binder instance: the LaunchBot app, which runs from the desktop but is accessed via browser, allows you to clone projects from public Github repos that contain a Dockerfile, and perhaps a set of notebooks. (You can use this url as an example – it’s a set of notebooks from original OU/FutureLearn Learn to Code for Data Analysis course.) The project README is displayed as part of the project homepage, and an option given to view, edit and save the project Dockerfile.

The Dockerfile can then be used to launch an instance of a corresponding container using your own (locally running) Docker instance:

(A status bar in the top margin tracks progress as image layers are downloaded and Dockerfile commands run.)

The base image specified in the Dockerfile will be downloaded, the Dockerfile run, and I’m guessing links to all services running on exposed ports are displayed: 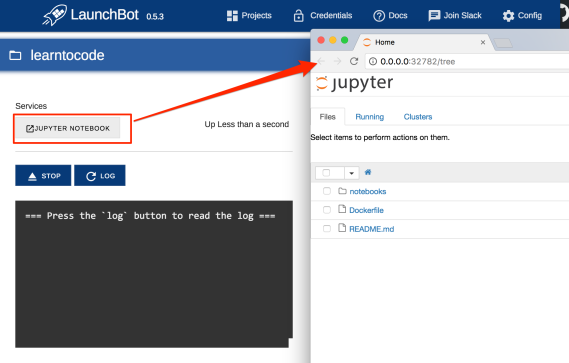 In the free plan, you are limited to cloning from public repos, with no support for pushing changes back to a repo. In the $7 a month fee based plan, pulls from private repos and pushes to all repos are supported.

From a quick play, LaunchBot is perhaps easier to use than Kitematic. Whilst neither of them support launching linked containers using docker-compose,  LaunchBot’s ability to clone a set of notebooks (and other files) from a repo, as well as the Dockerfile, makes it more attractive for delivering content as well as the custom container runtime environment.

I had a quick look around to see if the source code for LaunchBot was around anywhere, but couldn’t find it offhand. The UI is a likely to be little bit scary for many people who don’t really get the arcana of git (which includes me! I prefer to use it via the web UI ;-) and could be simplified for users who are unlikely to want to push commits back. For example, students might only need to to pull a repo once from a remote master. On the other hand, it might be useful to support some simplified mechanism for pulling down updates (or restoring trashed notebooks?), with conflicts on the client side managed in a very sympathetic and hand-holdy way (perhaps by backing up any files that would otherwise be overwritten from the remote master?!). (At the risk of feature creeping LaunchBot, more git-comfortable users might find some way of integrating the nbdime notebook diff-er useful?)

Being able to brand the LaunchPad UI would also be handy…

From a distributed authoring perspective, the git integration could be handy. As far as the TM351 module team experiments in coming up with our own distributed authoring processes go, the use of a private Github repo means we can’t use the LaunchBot approach, at least under the free plan. (From the odd scraps I’ve found around the OU’s new OpenCreate authoring system, it supposedly supports versioning in some way, so it’ll be interesting to see how that works…) The TM351 dockerised VM also makes use of multiple containers linked using docker-compose, so I guess to use it in a LaunchBot context I’d need to build a monolithic container that runs all the required services (Postgres and MongoDB, as well as Jupyter) in a single image (or may I could run docker-compose inside a Docker container?)

PS this could also be a handy tool for supporting authoring and maintenance workflows around notebooks: nbval, a “py.test plugin to validate Jupyter notebooks”. I wonder if it’s happy to test the raising of particular errors/warnings, as well as cleanly executed code fragments? Certainly, one thing we’re lacking in our Jupyter notebook production route at the moment is a sensible way of testing notebooks. At the risk of complicating things further, I wonder how that might fit into something like LaunchBot?

PPS Binder also lacks support for docker-compose, though I have asked about this and there may be a way in if someone figures out a spawner that invokes docker-compose.