Whilst exploring how we might be able to use Jupyter notebooks hooked up to the Coppelia Robotics V-REP robot simulator, it struck me that we needed a fair amount of boilerplate stuff to get the simulator loaded with an appropriate scene file and the a connection made to the simulator from the notebook so we could script the robot actions from the notebooks.

My first approach to trying to simplify presentation was to create some “self-documenting” notebooks that could be used to set-up necessary environmental variables and import default classes and functions: 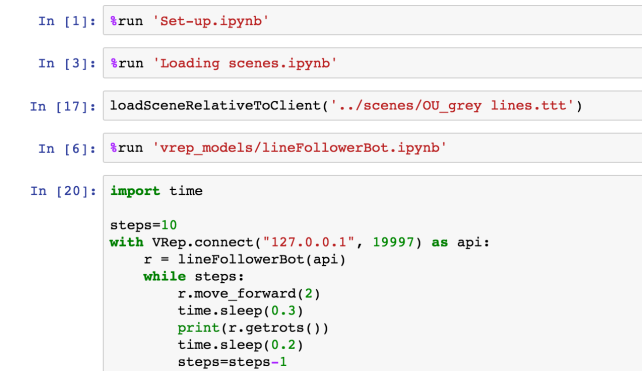 The %run cell magic loads and runs the referenced notebooks, which can also be inspected (and modified) by students.

(To try to minimise the risk of students introducing breaking changes into the imported notebooks, we could also lock the cells as read-only in the notebooks. Whilst this requires an extension to be installed to implement the read-only behaviour, the intention is that we distribute a customised Jupyter notebook environment to students.)

The loadSceneRelativeToClient() function loads the specified scene into the simulator. Note that this scene should contain a robot model. Once the connection to the simulator is made, a robot object can be instantiated using the connection details. The robot class should contain the definitions required to control the robot model in the loaded in scene.

Setting up the connection to the simulator is a bit of a faff, and when code cell execution is stopped we can get an annoying KeyboardInterrupt report: 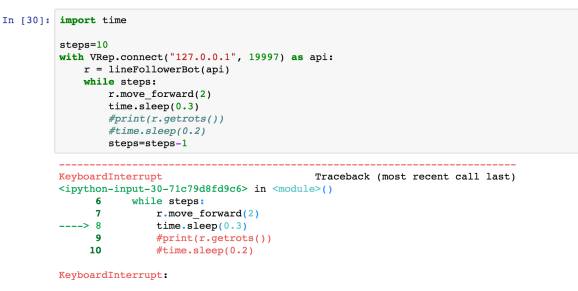 We can defend against the KeyboardInterrupt by wrapping the code execution in a try/except block:

But it struck me that it would be much nicer to be able to use some magic along the lines of the following, in which we set up the simulator with a scene, identify the robot we want to control, automatically connect to the simulator and then just run the robot control program:

So here’s a first attempt at some IPython cell magic to do that:

I’ve also added a bit of line magic to display the methods defined on a robot model class:

The tension now is a pedagogical one: for example, should I be providing students with the robot model, or should they be building up the various control functions (.move_forwards(), .turn_left(), etc.) themselves?

I’m also wondering whether I should push the while True: component into the magic? On balance, I think students need to see it in their code block because getting them to think about control loops rather than one shot execution of command statements is something they often don’t get the first, or even second, time round. But for reducing clutter, it’d make for far cleaner cell block code.