In a meeting a couple of days ago discussing some of the issues around what sort of resources we might want to provide students to support GIS (geographical information system) related activities, I started chasing the following idea…

The OU has, for a long time, developed software application in-house that is provided to students to support one or more courses. More often than not, the code is devloped and maintained in-house, and not released / published as open source software.

There are a couple of reasons for this. Firstly, the applications typically offer a clean, custom UI that minimises clutter and is designed in order to support usability for learners learning about a particular topic. Secondly, we require software provided by students to be accessible.

For example, the RobotLab software, originally developed, an still maintained, by my colleague Jon Rosewell was created to support a first year undergrad short course, T184 Robotics and the Meaning of Life, elements of which are still used in one of our level 1 courses today. The simulator was also used for many years to support first year undergrad residential schools, as well as a short “build a robot fairground” activity in the masters level team engineering course. 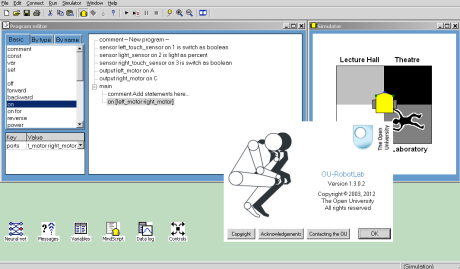 As well as the clean design, and features that support learning (such as a code stepper button in RobotLab that lets students step through code a line at a time), the interfaces also pay great attention to accessibility requirements. Whilst these features are essential for students with particular accessibility needs, they also benefit all out students by adding to the improved usability of the software as a whole.

So those are two, very good reasons, for developing software in-house. But as a downside, it means that we limit the exposure of students to “real” software.

Another issue with professional software is that much of it is mature, and has added features over its life. This is fine for early adopters: the initial versions of the software are probably feature light, and add features slowly over time, allowing the user to grow with them. Indeed, many latterly added features may have been introduced to address issues surrounding a lack of functionality, power or “expressiveness” in use identfied by, and frustrating to, the early users, particularly as they became more expert in using the application.

For a novice coming to the fully featured application, however, the wide range of features of varying levels of sophistication, from elementary, to super-power user, can be bewildering.

So what can be done about this, particularly if we want to avail ourselves of some of the powerful (and perhaps, hard to develop) features of a third party application?

To steal from a motorsport engineering design principle, maybe we can add lightness?

For example, QGIS is a powerful, cross-platform GIS application. (We have a requirement for platfrom neutrality; some of us also think we should be browser first, but let’s for now accept the use of an application that needs to be run on a computer with a “desktop” applciation system (Windows, OS/X, Linux) rather than one running a mobile operating system (iOS, Android) or eveloped for use by a netbook (Chrome OS).)

The interface is quite busy, and arguably hard to quickly teach around from a standing start:

However, as well as being cross-platform, QGIS also happens to be open source.

That is, the source code is available [github: qgis/QGIS].

Which means that as well as the code that does all the clever geo-number crunching stuff, we have access to the code that defines the user interface.

*[UPDATE: in this case, we don’t need to customise the UI by forking the code and changing the UI definition files – QGIS provides a user interface configuration / customisation tool.]

For example, if we look for some menu labels in he UI:

we can then search the source code to find the files that contribute to building the UI:

In turn, this means we can take that code, strip out all the menu options and buttons we don’t need for a particular course, and rebuild QGIS with the simplified UI. Simples. (Or maybe not that simples when you actually start getting into the detail, depending on how the software is designed!)

And if the user interface isn’t as accessible as we’d like it, we can try to improve that, and contribute the imporvements back the to parent project. The advantage there is that if students go on to use the full QGIS application outside of the course, they can continue to benefit from the accessiblity improvements. As can every other user, whether they have accessibility needs or not.

So here’s what I’m wondering: if we’re faced with the decision between wanting to use an open source, third party “real” application with usability and access issues, why build the custom learning app, especially if we’re going to keep the code closed and have to maintain it ourselves? Why not join the developer community and produce a simplified, accessible skin for the “real” application, and feed accessibility improvements at least back to the core?

On reflection, I realised we do, of course, do the first part of this already (forking and customising), but we’re perhaps not so good at the latter (contributing accessibility or alt-UI patterns back to the community).

For operational systems, OU developers have worked extensively on Moodle, for example (and I think, committed to the parent project)… And in courses, the recent level 1 computing course uses an OU fork of Scratch called OUBuild, a cross-platform Adobe Air application (as is the original), to teach basic programming, but I’m not sure if any of the code changes have been openly published anywhere, or design notes on why the original was not appropriate as a direct/redistributed download? 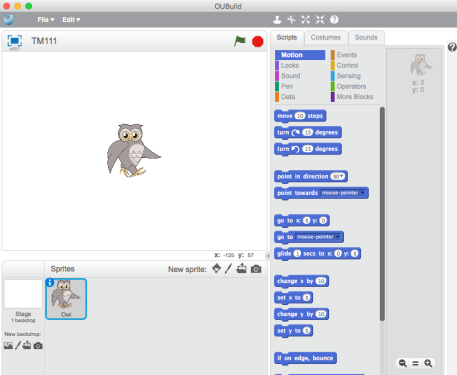 Looking at the Scratch open source repos, Scratch looks to be licensed under BSD 3-clause “New” or “Revised” License (“a permissive license similar to the BSD 2-Clause License, but with a 3rd clause that prohibits others from using the name of the project or its contributors to promote derived products without written consent”). Although it doesn’t have to be, I’m not sure the OUBuild source code has been released anywhere or whether commits were made back to the original project? (If you know differently, please let me know:-)) At the very least, it’d be really handy if there was a public document somewhere that identifies the changes that were made to the original and why, which could be useful from a “design learning” perspective. (Maybe there is a paper being worked up somewhere about the software development for the course?) By sharing this information, we could perhaps influence future software design, for example by encouraging developers to produce UIs that are defined from configuration files that can be easily customised and selected from, in that that users can often select language packs).

I can think of a handful of flippant, really negative reasons why we might not want to release code, but they’re rather churlish… So they’re hopefully not the reasons…

But there are good reasons too (for some definition of “good”..): getting code into a state that is of “public release quality”; the overheads of having to support an open code repository (though there are benefits: other people adding suggestions, finding bugs, maybe even suggesting fixes). And legal copyright and licensing issues. Plus the ever present: if we give X away, we’re giving part of the value of doing our courses away.

At the end of the day, seeing open education in part as open and shared practice, I wonder what the real challenges are to working on custom educational software in a more open and collaborative way?