A couple of days ago I posted about some IPython magic for embedding interactive maps in Jupyter notebooks.

I had a bit more of a play yesterday, and then into the night, and started to add support in for other things. For example, you can now build up a map using several pieces of magic, for example by assigning a magic generated map to a variable and then passing that map in as the basemap to another piece of magic.

If the output of the previously run code cell is a folium map, the magic will use that map as the starting map by default – there is a switch (-b None), or some alternative magic (%folium_new_map) that forces a fresh map if you want to start from scratch.

The magic now also has some support for trying to guess where to centre a map, as well as logic that tries to guess at what columns you might want to use when generated a choropleth map from some data and a geojson file. This is best exemplified by some helper magic: 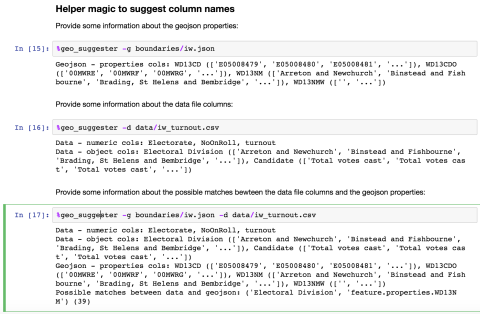 The same routines are used to try to guess column names if you omit them when trying to plot a choropleth. For example, here we only pass in a reference to the data file, the geojson file, and the numeric data column to colour the map. The columns used to plot the boundaries are guessed at.

This is likely to be very ropey – I’ve only tested it with a single pair of data/geosjon files, but it might work for limited general cases…

You can play with it here: