This time last week, I was waiting for a boat in advance of heading off to Clacton for the weekend. The event? The Corbeau Seats Rally, 2018, England’s first closed road rally (which is to say: #firstontheroad)…

…made possible as a result of changes to law last year. Here’s a copy of the permission granted: 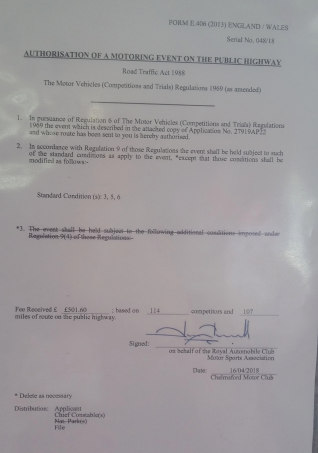 Part of the service area was along the sea front, which was closed to public road traffic, but open to pedestrians, for the duration of the event:

Scrutineering was also on the front and lasted for much of Saturday, just down the road from Rally HQ, which was also doing a sideline in tea and cake. (I’m starting to think rally events are a bit like library events: they’re equally friendly, and there always seems to be cake available:-)

On Saturday evening I went to find my hotel for the night, checking out the special stage I was marshalling on beforehand. The special stage itself had already been prepared. 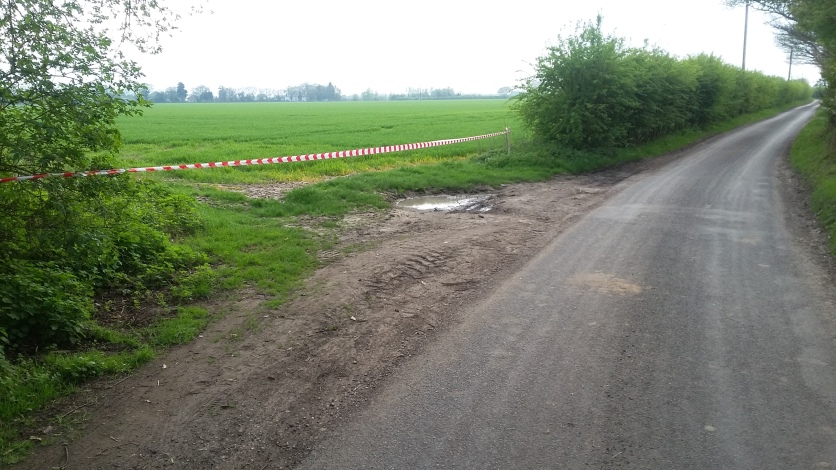 The MSA Blue Book, the de facto regulatory handbook for motorsport in the UK, goes so far as to define what sort of tape to use:

I also found the FIA Rally Safety Guidelines a fascinating read too… (Whilst there were a couple of official spectator areas, viewing on most of the special stages was unofficial – local residents standing away from the road at the end of marshal controlled footpaths, for example. One of the key learnings I think that can be taken away from the event is sighting where spectators unofficially congregated with a view helping more people see more of the rally safely in future.)

Fortuitously, the hotel was only 15 minutes or so from the special stage start, where I had to sign on Sunday just after 7am on Sunday morning. Knowing the likely special stage locations beforehand might be useful when booking my hotel next year.

Several competitor groups as well as officials were in the hotel I was in, and also in the local pub that night for dinner where the bar staff were quizzing drivers about the event and then passing on that information to locals.

I imagine one of the arguments made for the rally to the Tendring local council was the economic benefit the rally would bring to the area. A Clacton Gazette piece on the rally, Motor rally unveils maps of 5 stages around Tendring also picked up this cause:

Mr Clements [event director] said the event is set to bring in hundreds of thousands of pounds to the Tendring area.

He said: “There will be 120 competing teams with each team having a driver, co-driver and support team of three or four people.

“We probably have 50 senior organisers and between 500 and 1000 marshals coming in, spending money and maybe staying over night.

“In addition, our best guess is that we will have five to ten thousand spectators coming.”

He said they could bring in about £250,000 to £350,000 through paying for parking, food, drinks and accommodation over the weekend of the rally.

It will be interesting to see what the final estimated economic contribution was. My spend in the area was of the order of £100, for example.

(If you search for academic papers around motorsport, you often find economic impact analyses.)

And so to rally day, and sign on, where I was given a briefing pack for my post showing where to park and where to stand,  the special stage schedule, a can of pop and a Mars bar, and an official whistle (for warning others of an approaching car when the stage was live). I’m gutted I forgot to collect an official rally T-shirt though… 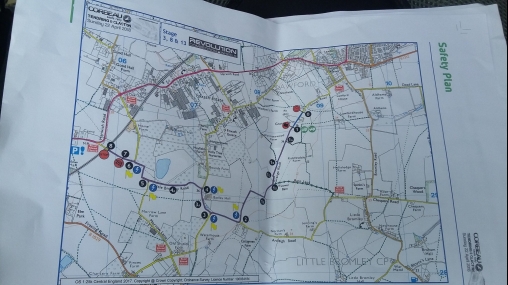 The post itself was at then end of a straight run:

…just before a slight S:

…with a no-go area alongside a footpath:

…and a couple of concrete blocks to stop cars from flying up an slight earth ramp just before the corner entry:

So then it was time to sit down and wait…

After an hour or so, an incoming text message that brought a tear to my eye (honestly!) announced the start of the rally proper:

The view from my chair, watching the officials and safety cars go by, an then the full speed rally cars themselves…

Unfortunately, I don’t have any photos of those – so here’s a picture of the view from my chair, watching out for incoming vehicles. It looks like there could be some really nice walks and bike rides around there…

As to why no photos of the cars: cameras are distracting and accidents can happen quickly. Here are the tyre tracks left from a wobbly incident by car 73 on their first run through the stage: 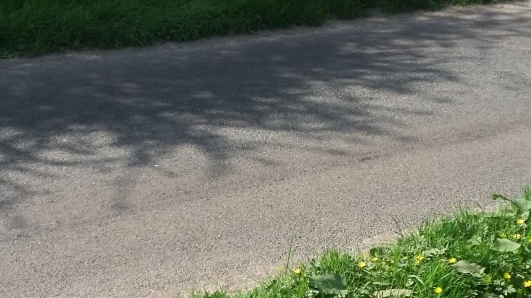 Between stage runs, there were a couple of hours to kill, so I wandered up and down the stage to chat to folk on the posts next to mine. Up the road, Anthony Concannon of the Southern Car Club, who organise the rally stage at the Goodwood Festival of Speed (I need to sign up for that…) mentioned that they had been working with the Isle of Wight Council to run the first closed road rally when the change in legislation was originally proposed, but that delays in the legislative process had led to it falling through. It would be great if the plan to bring a closed road rally to the island could be revived though. I’d certainly help put some hours in…

After over 8 hours on post, with three runs of the stage completed, it was time to help clear away tape and signage in the vicinity, and head off. Along the way, chats with supportive local residents, several of whom we’re interested in how to get started marshalling. It struck me that post event advertising by the likes of GoMotorsport making people aware of how to get involved might pay dividends. As might giving marshals fliers and recruitment promo materials that we could hand out to spectators who might be interested in getting involved.

I’d like to thank the sponsors, organisers, local council and local residents for helping make this event possible: it was a great day out. And as for my fellow marshals: I’ll see you around…

If you are interested in getting involve, check out the GoMotorsport or Volunteers in Motorsport websites and sign up for the (free) MSA online rally marshals’ training. And definitely sign up for a Rally Marshal Taster Event if you spot one running.