Some time ago I did some examples of querying DBPedia to find related music genres (Mapping Related Musical Genres on Wikipedia/DBPedia With Gephi) as well as other sorts of influence networks (eg programming languages).

After visiting the Black Sabbath exhibition in Birmingham recently (following the awesome Dawn After Dark gig supporting Balaam and the Angel) which had the most dubious of “metal” relationship maps on display in the shop, I thought I’d see how Wikipedia, via DBpedia, mapped that area out.

Gephi’s getting a bit long in the tooth now (netwulf is starting to look handy as a tool for styling networkx graphs; works in Jupyter notebooks too… more on this in another post…) and my original recipe seems to have broken (plus WordPress keeps crapping on the code, removing angle brackets etc), so I started scribbling notes around a recipe for trying to map band genres; it’s ages since I’ve had to try writing SPARQL querues, the notes are very scrappy / fragmentary, and some of the queries are quite possibly nonsense; but FWIW, you can find the notes here: Linked Data bands. I’ll try revisit them and produce some tidier recipes at some point…

I still used Gephi to render the network, though (this was before I found netwulf…). As an example, here’s a map of genres related to Heavey metal music [original svg]. 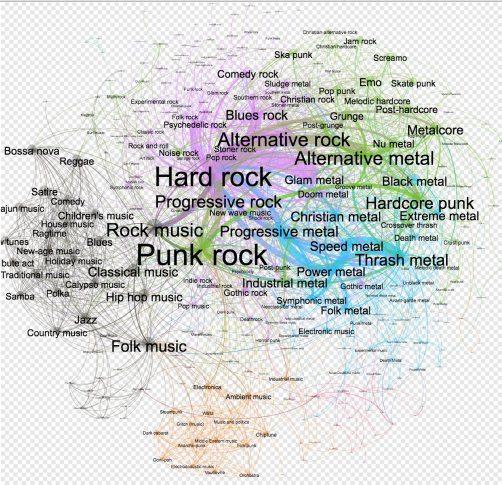 I also started wondering about that other live music related things I might be able to dredge up out of DBPedia queries. One of the categories used to tag entities in DBPedia is Music_venues_in_England, and from that music venues in other, smaller locales; venues are also tagged with geo-co-ordinates (latitude and longitude values) so we can quite easily run a query for music venues in England and from that generate a map.

An example notebook is here: Venues – Linked Data.ipynb. A preview of the map can be found rendered from the gist here. 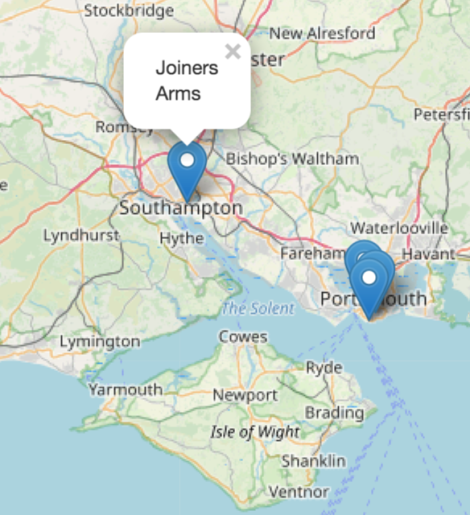 As I’ve noted previously, (an insight I think Martin Hawksey first made me grok fully), visualisations like this can be great for spotting errors, or gaps, in datasets. For example, Southampton has several other excellent venues aside from the Joiners Arms, and on the Isle of Wight, we have Strings as our local indie venue. [Actually, that might be the wrong version of the map; several venues that I thought were in the map I recall arenlt on that map…]

PS this is neat, from Terence Eden / @edent, a semantic take on the London Tube Map using data from Wikidata, with lines relating topical categories and stations to people’s names: The Great(er) Bear – using Wikidata to generate better artwork. [Picking up on that, some notes on transit mapping.]