[aka A Note on Noticing…] Ever since I can remember, information discovery has fascinated me (a year after graduating, just before the web appeared, I started exploring with a university friend how we might rival subscription providers such as Dialog with tooling built around Archie, gopher, Veronica and so on that could provide one stop information destinations in vertical content areas… And then I landed a postgrad position… And soon after saw Mosaic for the first time…). The intelligence part of the stack – making stories on top of information maps, I guess (paraphrasing Fragments of Amber: Map Makers and Story Tellers) – was always the next step, the more obviously value-add step, the more obviously saleable step, the step that could directly supported decision making and as such initiate actions that could directly drive income or savings. Or thwart terrorist plots. Or whatever.

Anyway, via @mhawksey, I see this tweet: “Curating Big Data in the Cloud rww.to/H8aVzb via @sheilmcn”

The ReadWriteWeb story describes a company called Flow that allows users to construct their own Techmeme like content trackers. The storytweet – and I think something of the sentiment behind Martin’s tweetit – immediately put me in mind of* Strategy Eye, a platform I came across yesterday, that bills itself as a “[c]loud platform enabling media partners to rapidly launch B2B intelligence portals and drive subscription or ad revenues”. In short, a platform that (in part at least) seems to let you build vertical content aggregators such as Wind Power Intelligence; (“Windpower Intelligence monitors key activities in the global wind industry including pipeline wind farms, deals, contracts, investments and policies. Clients access our content by subscribing to our Investment Reports and real-time Tracker.”)

I came across Stategy Eye and Windpower Intelligence via this post: Media Pioneer: Windpower Intelligence, which opens as follows: “Windpower Intelligence is a paid-for digital tracker service launched in September 2010. The tracker is an experimental new platform developed by Haymarket with StrategyEye. The aim was to create a high value information service that wove together journalism, data and analytical tools in an intuitive system delivering customised information and data. In under a year, this service has generated a six-figure sum in subscription revenue, earning a place on the 2012 Media Pioneers shortlist.”

As to how I found the InPublishing article? That was another tweet, this time from @paulbradshaw: “Another example of a magazine with a business model centred on data: Windpower Intelligence is a paid-for digita… http://bit.ly/HLXrJo&#8221;

The “business” keyword in Paul’s post, (along with the “six figure sum” reference in the article he linked to), along with the attention grabbing “imagine ££££” from Martin’s post also helped sensitise me to the spot-it-or-don’t natural pairing of Flow and Strategy Eye along the “(new?) ways of businesses making making from data” dimension. And as every follower of Dirk Gently knows, you have to be sensitive to coincidence and the fundamental interconnectedness of things…

So why this post? Because this little example is just a note to self about my “practice”, that captures part of it well. The chance noticing of two vaguely related things that together help crystallise out a clearer idea about what’s going on in the world. In this case, flow based tracking verticals. Which isn’t really a new idea at all… Although that isn’t to say it won’t be a huge market, albeit just an iteration of a current one.

PS on the sort of related ‘not quite futurism’ front, see this recent post from John Battelle: If-Then and Antiquities of the Future (which also put me in mind of @briankelly’s The History Of The Web Backwards).

Whether or not William Gibson actually said – either exactly, or approximately – “The future is already here. It’s just not evenly distributed yet” – it’s undoubtedly the case that many of the technologies that will come to influence our lives in the near future have already been invented, they just haven’t been fully tested, regulated, insured against or officially approved yet.

So to get an idea about what’s upcoming, one thing we can do is track the regulators and testing agencies, as well as new offerings from the insurers, such as the Driverless Car Insurance from Adrian Flux:

Getting on for fifteen years ago now, approximately, the UK Health and Safety Executive commissioned a report on The future health and safety implications of global positioning satellite and machine automation, looking at the health and safety implications of automated machinery particularly in a quarrying context, the sort of thing introduced by Rio Tinto’s “Mine of the Future” in 2008. (The HSE also have a report from 2004 that, among other things, considers risks associated with autonomous underwater vehicles: Risk implications in site characterisation and analysis for offshore engineering and design. Which reminds me, when does the Unmanned Warrior exercise take place?)

Another place we might look to are registers of clinical trials. So for example, how are robots are being tested in UK Clinical Trials? 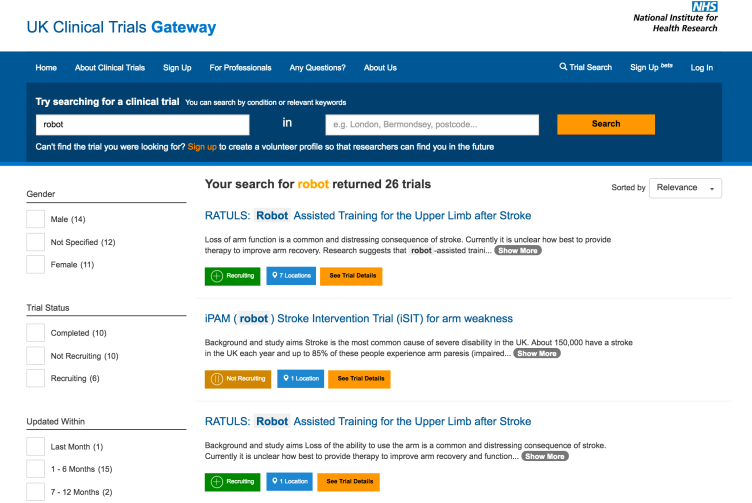 We could also run a similar search on the US ClinicalTrials.gov register, or the ISRCTN Registry.

Or how about software related clinical trials?

Hmm.. thinks.. I wonder: is “software” being prescribed in the UK? If so, it should be recorded in the GP prescribing opendata… But as what, I wonder?!

PS One for the librarians out there – where else should I be looking? Tracking legislation and government codes of practice is one source (eg as per Regulating Autonomous Vehicles: Land, Sea and Air…). But what other sources are there?