Over dinner at Côte in Cambridge last week, during the Arcadia Project review event, I doodled a couple of data structures, one on either side of a scrap of paper, and asked my co-Arcadians what sort of thing the drawing might represent, or what the structures they described might be called in general terms.

The sketches were broadly along the lines of the following, though without the circular nodes and labels displayed, just a set of connecting lines: 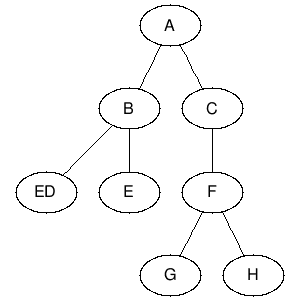 So if I asked you the same question (what would you call these two different things?), how would you answer?

To my mind, the different organisational structures these represent, and how we can exploit and manipulate them, represents a whole host of issues in the reimagining of information literacy and the teaching of information skills. This ranges from an understanding of the structure of information spaces through the representation and analysis of those structures, to ways in which we can navigate and discover things in those spaces as well as how we can visualise and otherwise make sense of them.

So how would I describe the two different things shown above? The first image represents a hierarchy and is often referred to as a tree. Many library classification schemes, and many organisational management structures, are based around that sort of information structure.

The second image is a depiction of a more general network structure. Whenever I talk about graphs on the OUsefu.info blog (in fact, pretty much whenever I talk about a graph anywhere), that’s the sort of thing I’m talking about. This mess of connections is the way the web is structured. (The tree structure is also a graph, but subject to particular constraints; can you work out what some of those constraint might be?)

Note: it’s maybe worth reiterating at this point when I talk about graphs, the messy network thing I mean, not line charts like this:

One of the terms I got to describe one of the graphs was “a matrix”. Matrices are in fact a very powerful way of describing the structure of a graph – if you fancy a treasure hunt, the terms adjacency matrix and incidence matrix should give you a head start…

I’m not sure what the problem is, but I think there is a problem that arises from not appreciating how powerful graph structures are as a way of making sense of the world. And I’m not really sure what I wanted to say in this post… except maybe go on a little fishing expedition to see how widespread the lack of familiarity with the notion of a graph as something like this:

really is…? So, if I asked you to draw a graph: a) what would you draw? b) would you even remotely consider drawing something the the image directly above? If you answered “no’ to (b), does it “say” anything to you at all?! Would you ever draw a diagram that had that flavour when explaining something (what?!) to someone else? (And the same question for the hierarchy…?)

PS a nice thing about graphs is you don’t have to draw them by hand – all you have to do is describe what connects to what, and then you can let a machine draw it for you. So for example:

11 thoughts on “Information Literacy, Graphs, Hierarchies and the Structure of Information Networks”