An article in the Observer declares Academy chain accused of ‘privatisation by stealth’ over plan to outsource jobs, a report on how the Academy Enterprise Trust (AET) has “selected” PricewaterhouseCoopers (PwC) to partner with it in establishing an LLP “to take over responsibility for providing school business managers, IT staff, secretarial staff, and finanicial expertise, along with speech and language therapy provision, education psychology, education welfare, curriculum development and professional development”.

Here’s a quick chart of academy groupings with at least 15 academies in the group:

As you might expect, when talking about their performance, the group in part assumes you must be referring to their financial rather than just educational performance: 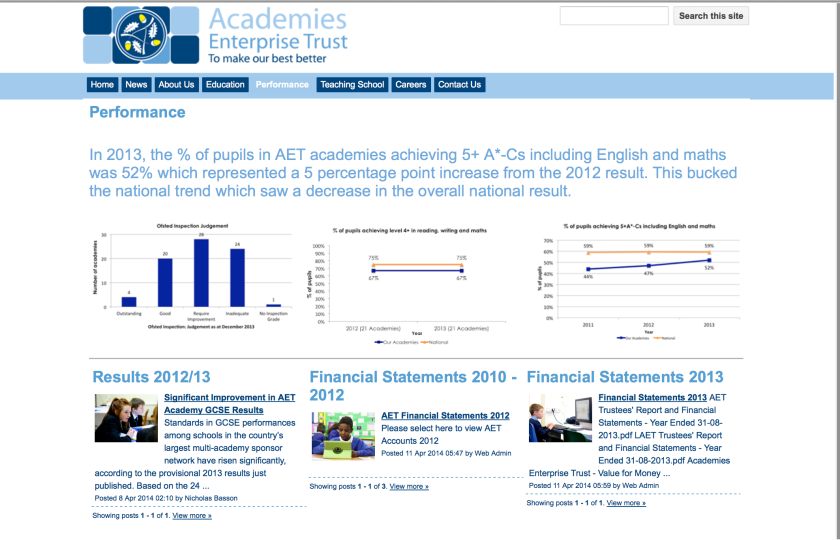 (By the by, they really need to talk to their webteam about the domain mapping…)

As well as outsourcing everything, it looks like the AET is of a size where they can start raking it in as a provider of teacher training courses:

(I don’t know if this means they can use their own academies for placements, getting cheap labour and perhaps a training grant bung, as well as the more general student fees, for each placement?) 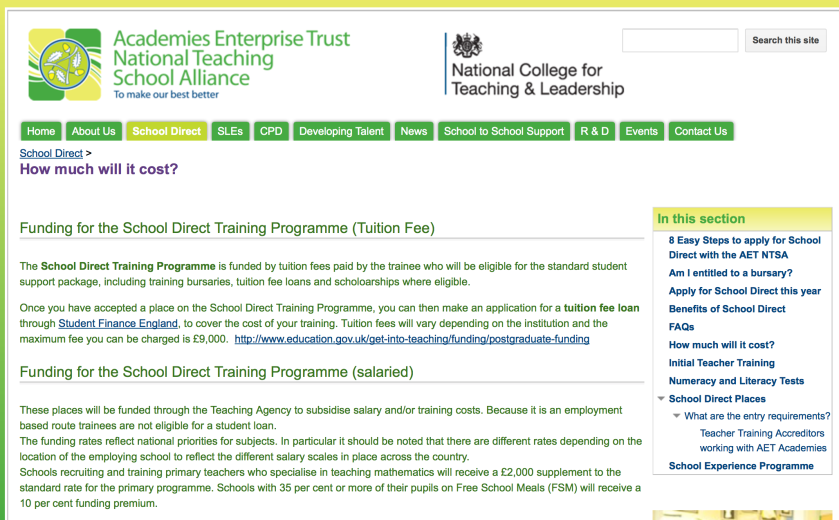 You will spend the majority of your training in the classroom, building your confidence in an academy environment whilst receiving excellent mentoring support.
You will complete placements in academies who are experienced in initial teacher training and who excel at training and developing their staff.
All School Direct places will lead to Qualified Teacher Status (QTS). In addition, some providers also accredit a Postgraduate Certificate in Education (PGCE)

Participating AET academies recruit and select their own trainees with the expectation that they will then go on to work within the Academies Enterprise Trust, although there is no absolute guarantee of employment.

Scale-up, plug-in, live-off public money and private student debt, partner with “trusted auditors” to disburse funds to private providers (because they previously got rumbled when making disbursements to themselves…?) – is that how it works?

By the by, the following schools are part of the AET group:

One thought on “School Chain Locks Out Public Service Values?”