During the last couple of weeks of Cabinet Office Code Clubs, we’ve started to explore how we can use the python folium library to generate maps. Last week we looked at getting simple markers onto maps along with how to pull data down from a third party API (the Food Standards Agency hygiene ratings), and this week we demonstrated how to use shapefiles.

As a base dataset, I used Chris Hanretty et al.’s election forecasts data as a foil for making use of Westminster parliamentary constituency shapefiles. The dataset gives a forecast of the likelihood of each party winning a particular seat, so within a party we can essentially generate a heat map of how likely a party is to win each seat. So for example, here’s a forecast map for the Labour party

Although the election data table doesn’t explicitly say which party has the highest likelihood of winning each seat, we can derive that from the data with a little bit of code to melt the original dataset into a form where a row indicates a constituency and party combination (rather than a single row per constituency, with columns for each party’s forecast), then grouping by constituency, sorting by forecast value and picking the first (highest) value. (Ties will be ignored…)

We can then generate a map based on the discrete categorical values of which party has the highest forecast likelihood of taking each seat.

An IPython notebook showing how to generate the maps can be found here: how to use shapefiles.

One problem with this sort of mapping technique for the election forecast data is that the areas we see coloured are representative of geographical area, not population size. Indeed, the population of each constituency is roughly similar, so our impression that the country is significantly blue is skewed by the relative areas of the forecast blue seats compared to the forecast red ones, for example.

Ways round this are to use cartograms, or regularly sized hexagonal boundaries, such as described on Benjamin Hennig’s Views of the World website, from which the following image is republished; (see also the University of Sheffield’s (old) Social and Spatial Inequalities Research Group election mapping project website): 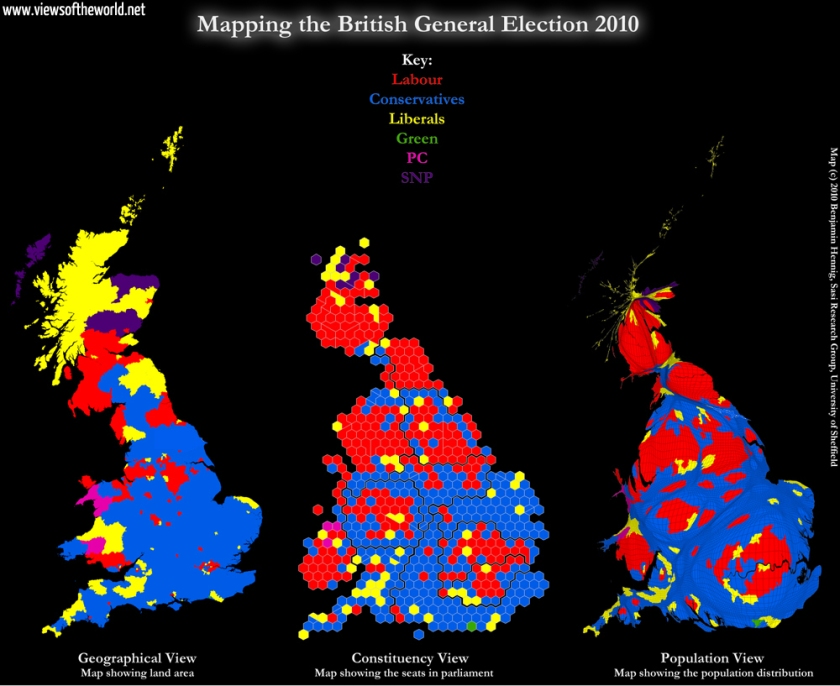 (A hexagonal constituency KML file, coloured by 2010 results, and corresponding to constituencies defined for that election, can be found from this post.)