One of my daily read feeds is a list of the day’s government statistical releases. Today, I spotted a release on the Operation of police powers under the Terrorism Act 2000, quarterly update to September 2015, which included an annes on Arrests and outcomes, year ending September 2015:

I tweeted a link to doc, and Michael/@fantasticlife replied with a comment it might look interesting as a Sankey diagram…

I took the liberty of adding an extra “InSystem’ step into the chart to account for the feedback look of the bailed arrests.

Here’s the data I used:

Looking at the diagram, I find the placement of the labels quite confusing and I’m not really sure what relate to what. (The numbers, for example…) It would also be neater if we could capture flows still “in-the system”, for example by stopping the Released on bail element at the same depth as the Charged elements, and also keeping the Awaiting prosecution element short of the right hand side. (Perhaps bail and awaiting elements could be added into a “limbo” field?)

So – nice idea, but as soon as you look at it you see that a quick look at trivial sketch immediately identifies all sorts of other issues that you need to take into account to make the diagram informatively glanceable…

Thinks.. SankeyMATIC is a d3.js app… it would be nice if I could drag the elements in the generator to may the diagram a bit clearer… maybe I can? 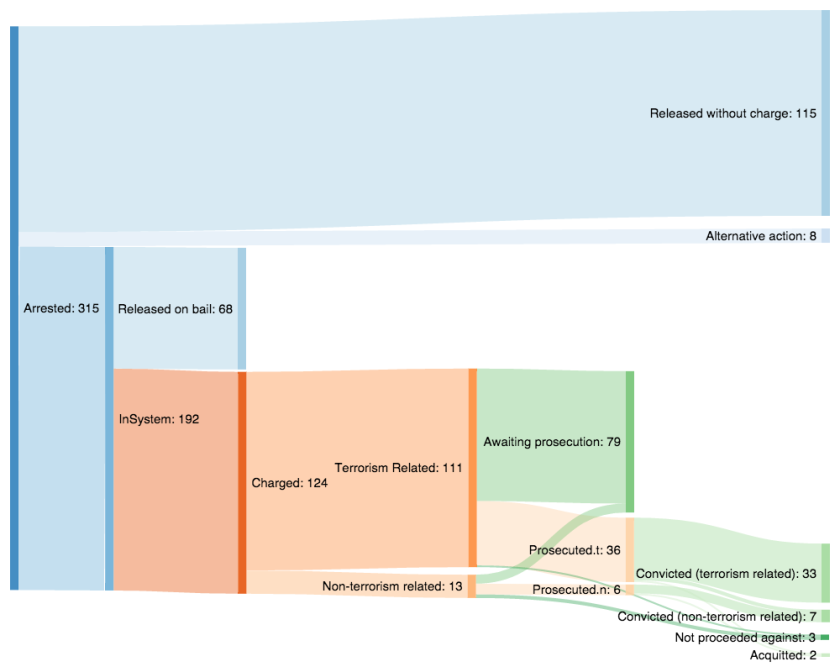 Only that’s wrong too… because the InSystem label applies to the boundary to the left, and the Bail label to the right… So we need to tweak it a bit more…

In fact, you may notice that the labels seem to be applied left and right justified according to different rules? Hmmm… Not so simple again…

How about if I take out the insterstitial value I added?

That’s perhaps a bit clearer? And all goes some way to showing how constructing a graphic is generally an iterative process, scaffolding the evolution of the diagram as you go, as you learn to see it/read it from different perspectives and tweak it to try to clarify particular communicative messages? (Which in this case, for me, was to try to tease out how far through the process various flows had got, as well as clearly identify final outcomes…)

Other things we could do to try to improve the graphic are experiment a bit more with the colour schemes. But that’s left as an exercise for the reader…;-)