I had another play today and added a few extra features, including the ability to:

We can now also pass in the path to a hexJSON file, rather than just the hexJSON object: 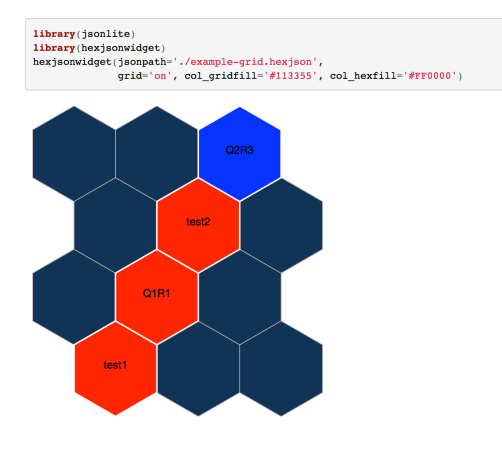 And here’s an example of the default grid colour and a custom text colour :

I’ve also tried to separate out the code changes as separate commits for each feature update: code checkins. For example, here’s where I added the original colour handling.

I’ve also had a go at putting some docs in place, generated using roxygen2 called from inside the widget code folder with devtools::document(). (The widget itself gets rebuilt by running the command devtools::install().)

Next up – some routines to annotate a base hexJSON file with data to colour and label the hexes. (I’m also wondering if I should support the ability to specify arbitrary hexJSON hex attribute names for label text (label) and hex colour (col), or whether to keep those names as a fixed requirement?) See what I came up with here: HexJSON HTMLWidget for R, Part 3.