Yesterday, I had the good fortune to visit the F1 Marussia Virgin Racing factory at Dinnington, near Sheffield, as a result of “winning” a luck dip competition run via GoMotorSport (part of a series of National Motorsport week promotions being run by the F1 teams based in the UK).

[Thanks to @markhendy for the pic…]

Thanks to Finance Director Mark Hendy and engineer Shakey for the insight into the team’s operations:-)

Over the next few days and weeks, I’ll try to pick up on a few of the things I learned from the tour on the F1DataJunkie blog, tying them in to the corresponding technical regulations and other bits and pieces, but for now, here are some of the noticings I came away with…

– the engines aren’t that big, weighing 90kg or so and looking small than the engine in my own car… 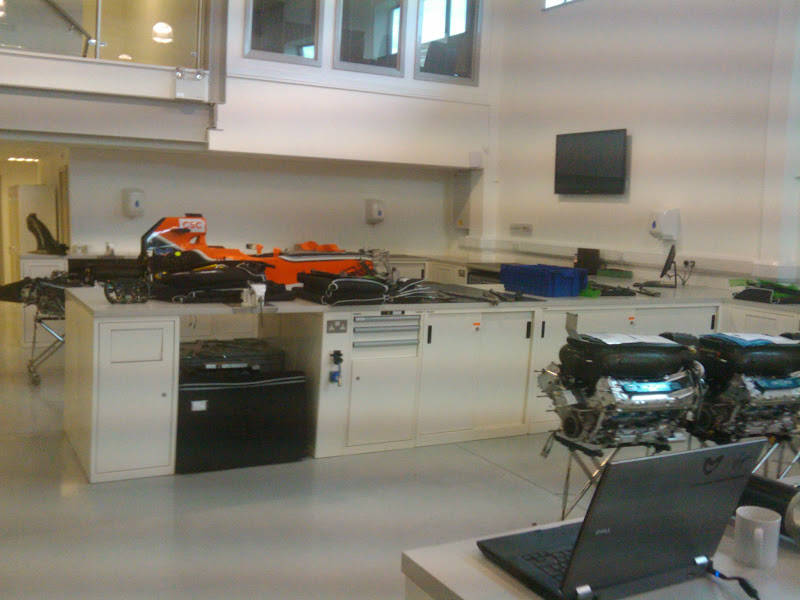 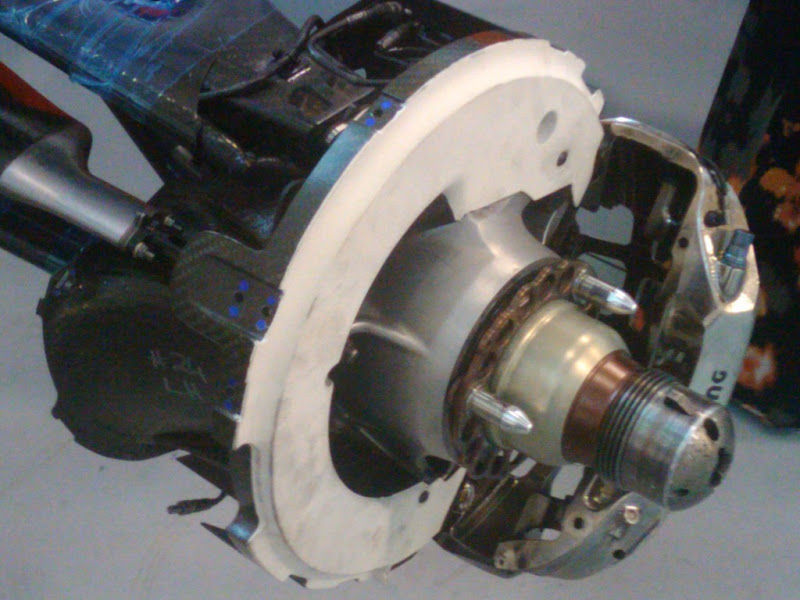 – the drivers aren’t that heavy either, weight wise (not that we met either of the drivers: neither Timo Glock nor Jerome D’Ambrosio are frequent visitors to the Dinnington factory, where the team’s cars are prepared fro before, and overhauled after, each race…): 70 kg or so. With cars prepared to meet racing weight regulations to a tolerance of 0.5kg or so, a large mixed grill and a couple of pints can make a big difference… (Hmm, I guess it would be easy enough to calculate the “big dinner weight effect” penalty on laptime?!)

I’m not sure if this was a “right-handed vs left-handed spanner” remark, but a comment was also made that the adhesive sponsor sticker can have a noticeable effect on the car’s aerodynamics as the corners become unstuck and start to flap. (Which made me wonder, of that is the case, is the shape of stickers taken into account? Is a leading edge on a label with a point/right angled corner rather than a smooth curve likely to come unstuck more easily, for example?!) Cars also need repainting every few races (stripping back to the carbon, and repainting afresh) because of pitting and chipping and other minor damage than can affect smooth airflow. 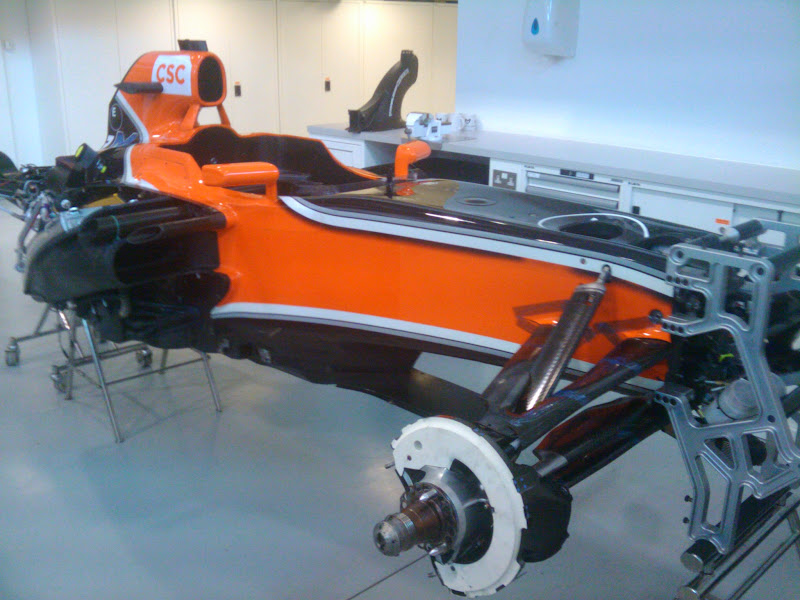 – side impact tubes are an integral part of the safety related design of the car: 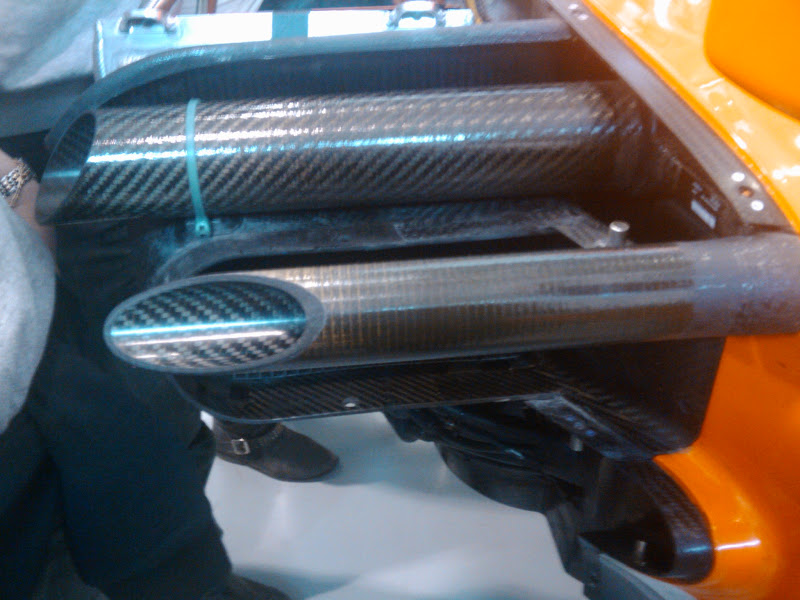 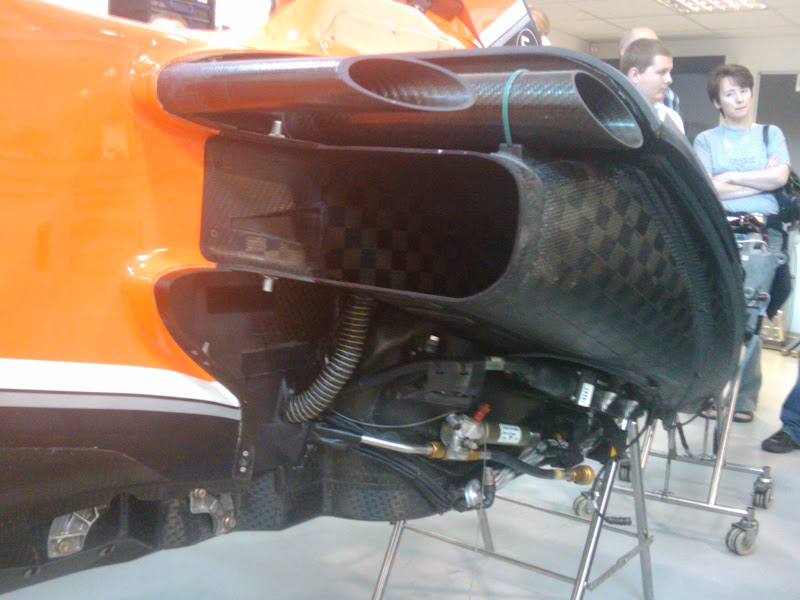 – to track the usage of tyres during a race weekend, an FIA official scans a barcode on each tyre as it is used on the car: 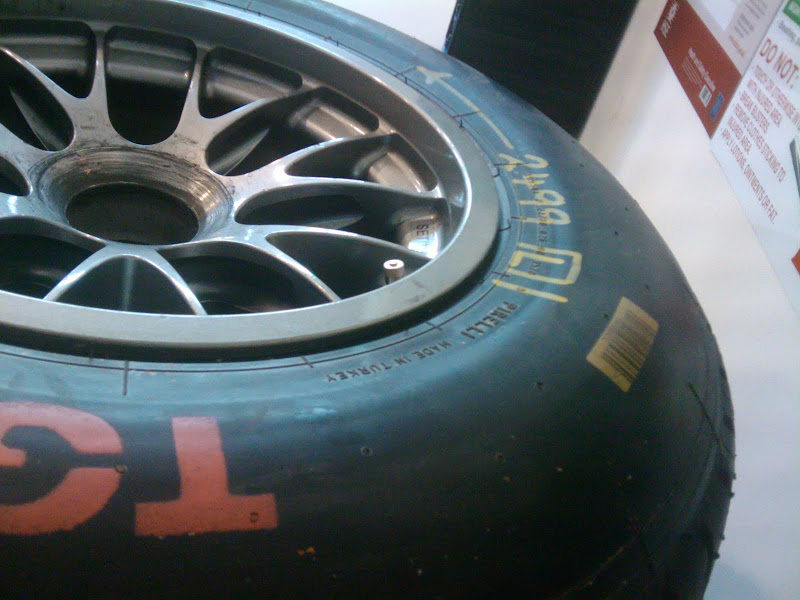 The data junkie in me in part wonders whether this data could be made available in a timely fashion via the Pirelli website (or a Pirelli gadget on each team’s website) – or would that me giving away too much race intelligence to the other teams? That way, we could get an insight into the tyre usage over the course weekend…

– IT plays an increasingly important part of the the pit garage setup; local area networks (cabled and wifi?) are set up by each team for the weekend, the data engineers sitting behind the screen and viewing area in the garage (rather than having a fixed set up in one of the 5(?) trucks that attends each race.).

– the cars are rigged up with 60 or sensors; there is only redundancy on throttle and clutch sensors. Data analysis is in part provided through engineers provided by parts suppliers (McLaren Electronics, who supply the car’s ECU (and telemetry box(?)) provide a dedicated person(?) to support the team; data analysis is, in part, carried out using the Atlas (9?) Advanced Telemetry Linked Acquisition System from McLaren Electronic Systems. Data collected during a stint is transmitted under encryption back to the the pits, as well as being logged on the car itself. A full data dump is available to the team and the FIA scrutineers via an umbilical/wired connection when the car is pitted.

– for design and testing, weekly reporting is required that conforms to a trade-off between the number of hours per week that each team can spend on wind tunnel testing (60 hours per week) and and CFD (“can’t find downforce”;-) simulation (40 teraflops per week). My first impression there was that efficient code could effectively mean more simulation testing?! (CFD via CSC? CSC expands relationship with Marussia Virgin Racing, doubling computing power for the team’s 2011 formula 1 season, or are things set to change with the replacement of Nick Wirth by Pat Symonds…?)

– the resource restriction agreement also limits the number of people who can work on the chassis. For a race weekend, teams are limited to 50 (47?) people. We were given a quick run down of at least (8?) engineer roles assigned to each car, but I forget them… 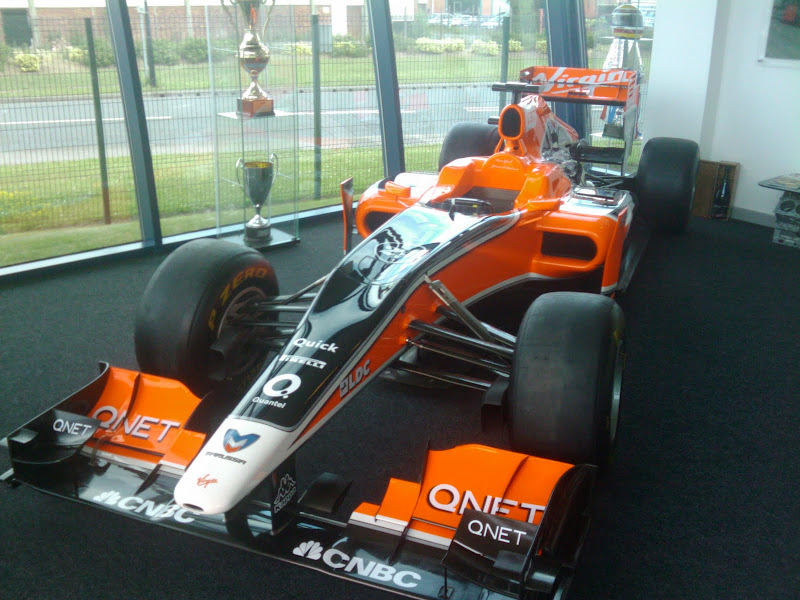 Marussia Virgin are making the most of their Virgin partnership over the Silverstone race weekend with a camping party/Virgin Experience at Stowe School (Silverstone Weekend) and a hook-up with Joe Saward’s “An Audience With Joe“… (If you don’t listen to @sidepodcast’s An Aside With Joe podcast series, you should…;-)

The team has also got en education thing going with race ticket sweeteners for folk signing up to the course: Motorsport Management Online Course.

I can’t help thinking there may be a market for a “hardcore fans” course on F1 that could run over a race season and run as an informal, open online course… I still don’t really know how a car works, for example ;-)

Anyway – that’s by the by: thanks again to the GoMotorsport and the Marussia Virgin Racing team (esp. Mark Hendy and Shakey) for a great day out :-)

PS I think the @marussiavirgin team are trying to build up their social media presence too… to see who they’re listening to, here’s how their friends connect: