One of the big issues when it comes to working with data is that things are often done most easily using small fragments of code. Something I’ve been playing with recently are IPython notebooks, which provide an interactive browser based interface to a Python shell. 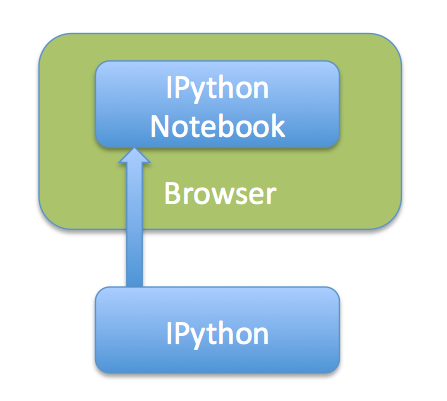 The notebooks are built around the idea of cells of various types, including header and markdown/HTML interpreted cells and executable code cells. Here are a few immediate thoughts on how we might start to use these notebooks to support distance and self-paced education: 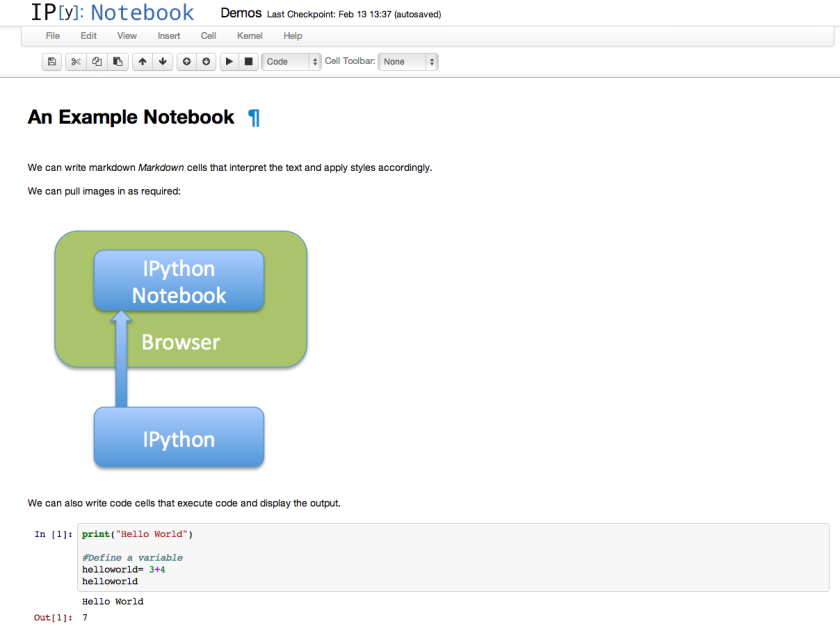 The output from executing a code cell is displayed in the lower part of the cell when the cell is run. Code execution causes state changes in the underlying IPython session, the current state of which is accessible to all cells.

Graphical outputs, such as chart objects generated using libraries such as matplotlib, can also be displayed inline (not shown).

There are several ways we might include a call to action for students:

We can also explore ways of providing “revealed” content. One way is to make use of the ability to execute code, for example by importing a crib class that we can call… 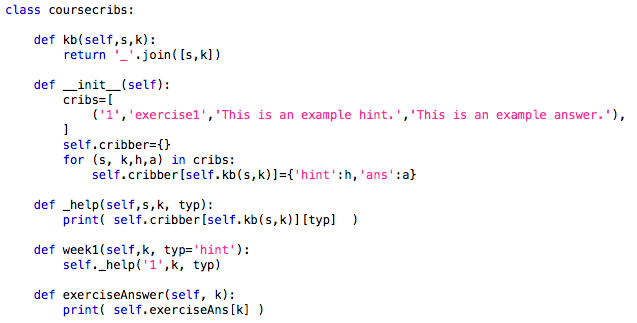 That mechanic is quite clunky and doesn’t have very good production values. It would be far cleaner if we could integrate reveals at the higher presentation level. Since markdown cells allow the inclusion of styled HTML and javascript, we could think about traditional e-learning reveals. For example, we might include an HTML button that can be clicked to reveal an answer:

All code cells in a notebook can be executed one after another, or a cell at a time (You can also execute all cells above or below the cursor). This makes for easy testing of the notebook and self-paced working through it.

A helper application, nbconvert, allows you to generate alternative versions of a notebook, whether as HTML, python code, latex, or HTML slides (reveal.js). There is also a notebook viewer available that displays an HTML view of a specified ipynb notebook. (There is also an online version: IPython notebook viewer.)

Another advantage of the browser based approach is that the IPython shell can run in a virtual machine (for example, Cursory Thoughts on Virtual Machines in Distance Education Courses) and expose the notebook as a service that can be accessed via a browser on a host machine:

A simple configuration tweak allows notebook files and data files to occupy a folder that is shared across both the host machine and the guest virtual machine.

It is also possible to run remote notebook servers that can be accessed via the web. It would be nice if institutional IT services could support the sort of Agile EdTech that Jim Groom has been writing about recently, that would allow course teams developers to experiment with this sort of technology quickly and easily, but in the meantime, we can still do it ourselves…

For example, I am currently running a couple of virtual machines whose configurations I have “borrowed” from elsewhere – Matthew Russell’s Mining the Social Web 2nd Edition VM, and @datamineruk’s pandas infinite-intern machine.

I’ve only really just started exploring what may be possible with IPython notebooks, and how we might be able to use them as part of an e-learning course offering. If you’ve seen any particularly good (or bad!) examples of IPython notebooks being used in an educational context, please let me know via the comments…:-)

One thought on “Doodling With IPython Notebooks for Education”