Managing the tracking suggested changes to the same set of docs, along with comments and observations, from multiple respondents in is one of the challenges any organisation who business is largely concerned with the production of documents has to face.

Passing shared/social living documents by reference rather than value, so that folk don’t have to share multiple physical copies of the same document, each annotated separately, is one way. Tools like track changes in word processor docs, wiki page histories, or git diffs, is another.

All documents have an underlying representation – web pages have HTML, word documents have whatever XML horrors lay under the hood, IPython notebooks have JSON.

Change tracking solutions like git show differences to the raw representation, as in this example of a couple of changes made to a (raw) IPython notebook:

Notebooks can also be saved in non-executable form that includes previously generated cell outputs as HTML, but again a git view of the differences would reveal changes at the HTML code level, rather than the rendered HTML level. (Tracked changes also include ‘useful’ ones, such as changes to cell contents, and (at a WYSWYG level at least) irrelevant ‘administrative’ value changes such as changes to hash values recored in the notebook source JSON.

Tracking changes in a WYSIWYG display shows the changes at the rendered, WYSIWYG level, as for example this demo of a track changes CKEditor plugin demonstrates [docs]: 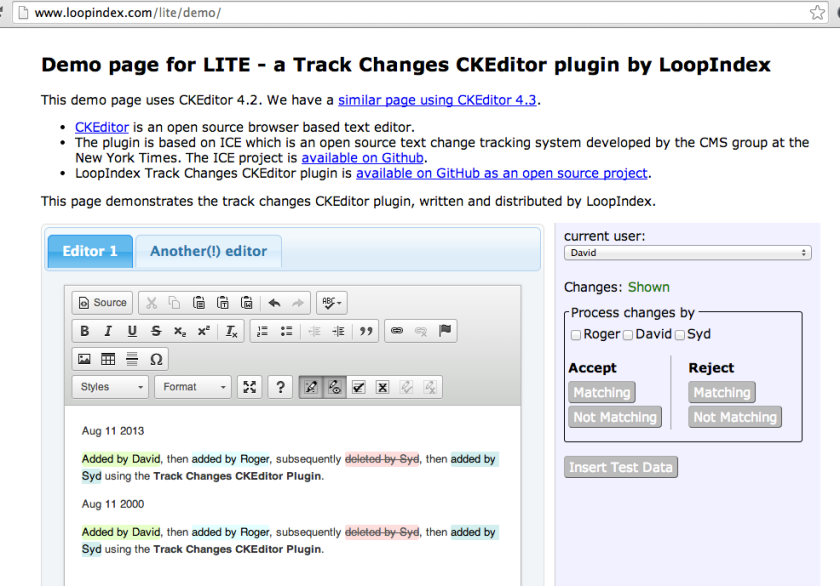 However, the change management features are typically implemented through additional additional metadata/markup to the underlying representation:

For the course we’re working on at the moment, we’re making significant use of IPython notebooks, requiring comments/suggested changes from multiple reviewers over the same set of notebooks.

So I was wondering – what would it take to have an nbviewer style view in something like github that could render WYSIWYG track changes style views over a modified notebook in just cell contents and cell outputs?

A similar principle would work the same for HTML too, of course. Hmm, thinks… are there any git previewers for HTML that log edits/diffs at the HTML level but then render those diffs at the WYSIWYG level in a traditional track changes style view?

Hmm… I wonder if a plugin for Atom.io might do this? (Anyone know if atom.io can also run as a service? Eg could I put it onto a VM and then axis it through localhost:ATOMIOPORT?)

PS also on the change management thing in IPython Notebooks, and again something that might make sense in a got context, is the management of ‘undo’ features in a cell.

IPython notebooks have a powerful cell-by-cell undo feature that works at least during a current session (if you shut down a notebook and then restart it, I assume the cell history is lost?). [Anyone know a good link describing/summarising the history/undo features of IPython Notebooks?]

I’m keen for students to take ownership of notebooks and try things out within them, but I’m also mindful that sometimes they make make repeated changes to a cell, lose the undo history for whatever reason, and then reset the cell to the “original” contents, for some definition of “original” (such as the version that was issued to the learner by the instructor, or the version the learner viewed at their first use of the notebook.)

A clunky solution is for students to duplicatea each notebook before they start to work on it so they have an original copy. But this is a bit clunky. I just want an option to reveal a “reset” button by each cell and then be able to reset it. Or perhaps in line with the other cell operations, reset either a specific highlight cell, reset all, cells, or reset all cells above or below a selected cell.