With all the “everyone needs to learn programming” hype around, I am trying to be charitable when it comes to what I think folk might mean by this.

For example, whilst trying to get some IPython magic working, I started having a look at TikZ, a LaTex extension that supports the generation of scientific and mathematical diagrams (and which has been around for decades…).

Getting LaTeX environments up and running can be a bit of a pain, but several of the Binderhub builds I’ve been putting together include LateX, and TikZ,  which means I have an install-free route trying snippets of TikZ code out.

As an example, in my showntell/maths demo includes an OpenLearn_Geometry.ipynb notebook that includes a few worked examples of how to “write” some of the figures that appear in an OpenLearn module on geometry.

The notebook includes several hidden code cells that generate the a range of geometric figures. To render the images, go to the Cell menu and select Run All.

To view/hide the code used to generate the figures, click on the Hide/Reveal Code Cell Inputs button in the notebook toolbar.

To make changes to the diagrams, click in the appropriate code input cell, make your change, and then run the cell using the Run Cell (“Play”) button in the toolbar or via the keyboard shortcut SHIFT-ENTER.

Here’s an example of one of the written diagrams (there may be better ways; I only started learning how to write this stuff a couple of days ago!) 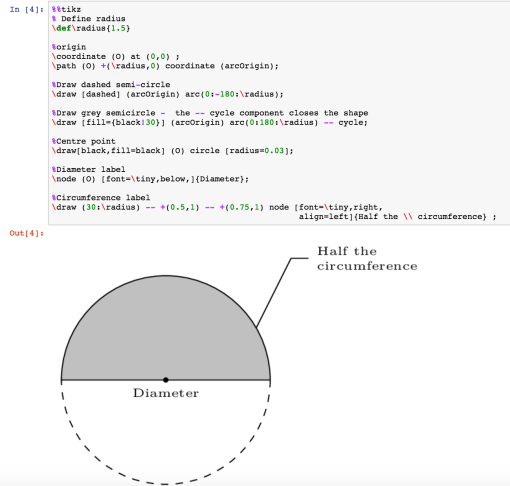 Whilst tinkering with this, a couple of things came to mind.

Firstly, this is programming, but perhaps not as you might have thought of it. If we taught adult novices some of the basic programming and coding skills using Tikz rather than turtle, they’d at least be able to create professional looking diagrams. (Okay, so the syntax is admittedly probably a bit scary and confusing to start with… But it could be simplified with some higher level, more abstracted, custom defined macros that learners could then peek inside.)

So when folk talk about teaching programming, maybe we need to think about this sort of thing as well as enterprise Java. (I spent plenty of time last night on the Stack Exchange TEX site!)

Secondly, the availability of things like Binderhub make it easier to build preloaded distributions that can be run by anyone, from anywhere (or at least, for as long as public Binderhub services exist). Simply by sharing a link, I can point you to a runnable notebook, in this case, the OpenLearn geometry demo notebook mentioned above.

One of the things that excites me, but I can’t seem to convince others about, is the desirability of constructing documents in the way the OpenLearn geometry demo notebook is constructed: all the assets displayed in the document are generated by the document. What this means is that if I want to tweak an image asset, I can do. The means of production – in the example, the TikZ code – is provide; it’s also editable and executable within the Binder Jupyter environment.

When HTML first appeared, web pages were shonky as anything, but there were a couple of buts…: the HTML parsers were forgiving, and would do their best to whatever corruption of HTML was thrown at them; and the browsers supported the ability to View Source (which still exists today; for example, in Chrome, go to the View menu then select Developer -> View Source).

Taken together, this meant that: a) folk could copy and paste other people’s HTML and try out tweaks to “cool stuff” they’d seen on other pages; b) if you got it wrong, the browser would have a go at rendering it anyway; you also wouldn’t feel as if you’d break anything serious by trying things out yourself.

So with things like Binder, where we can build disposable “computerless computing environments” (which is to say, pre-configured computing environments that you can run from anywhere, with just a browser to hand), there are now lots of opportunities to do powerful computer-ingy things (technical term…) from a simple, line at a time notebook interface, where you (or others) can blend notes and/or instruction text along with code – and code outputs.

For things like the OpenLearn demo notebook, we can see how the notebook environment provides a means by which educators can produce repurposeable documents, sharing not only educational materials for use by learners, or appropriation and reuse by other educators, but also the raw ingredients for producing customised forms of the sorts of diagrams contained in the materials: if the figure doesn’t have the labels you want, you can change them and re-render the diagram.

In a sense, sharing repurposeable, “reproducible” documents that contain the means to generate their own media assets (at least, when run in an appropriate environment: which is why Binderhub is such a big thing…) is a way of sharing your working. That is, it encourages open practice, and the sharing of how you’ve created something (perhaps even with comments in the “code” explaining why you’ve done something in a particular way, or where the inspiration/prior art came from), as well as the what of the things you have produced.

That’s it, for now… I’m pretty much burned out on trying to persuade folk of the benefits of any of this any more…