I had a bit of a play last night trying to hook a Jupyter notebook container up to an Apache Drill container using docker-compose. The idea was to have a shared data volume between the two of them, but I couldn’t for the life of me get that to work using the the docker-compose version 2 or 3 (services/volumes) syntax – for some reason, any of the Apache Drill containers I tried wouldn’t fire up properly.

So I eventually (3am…:-( went for a simpler approach, synching data through a local directory on host.

The Apache Drill container, and an Apache Zookeeper container to keep it in check, I found via Dockerhub. I also reused an official RStudio container. The Jupyter container is one I rolled for TM351.

This is far from ideal, but it works. (The structure is as suggested so that RStudio and Jupyter scripts can both be used to download data into a data directory viewable from the Apache Drill container. Another approach would be to mount a separate ./data directory and provide some means for populating it with data files. Alternatively, if the files already exist on host,  mounting the host data directory onto a /data volume in the Apache Drill container would work too.

Here’s the docker-compose.yaml file I’ve ended up with:

If you have docker installed and running, running docker-compose up -d in the folder containing the docker-compose.yaml file will launch three linked containers: Jupyter notebook on localhost port 35200, RStudio on port 8787, and Apache Drill on port 8047. If the ./notebooks, ./notebooks/data, ./R and ./R/data subfolders don’t exist they will be created.

We can use the clients to variously download data files and run Apache Drill queries against them. In Jupyter notebooks, I used the pydrill package to connect. Note the hostname used is the linked container name (in this case, drill). 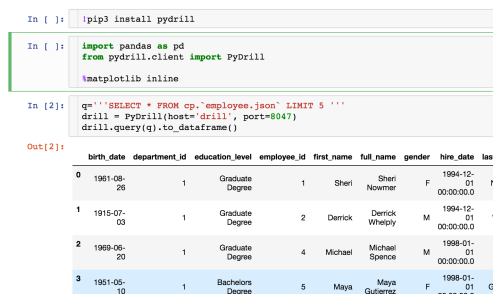 If we download data to the ./notebooks/data folder which is mounted inside the Apache Drill container as /nbdata, we can query against it.

(Note – it probably would make sense to used a modified Apache Drill container configured to use CSV headers, as per Querying Large CSV Files With Apache Drill.)

We can also query against that same data file from the RStudio container. In this case I used the DrillR package (I had hoped to use the sergeant package (“drill sergeant”, I assume?! Sigh..;-) but it uses the RJDBC package which expects to find java installed, rather than DBI, and java isn’t installed in the rocker/tidyverse container I used.) UPDATE: sergeant now works without Java dependency... Thanks, Bob:-)

I’m not sure if DrillR is being actively developed, but it would be handy if it could return the data from the query as a dataframe. 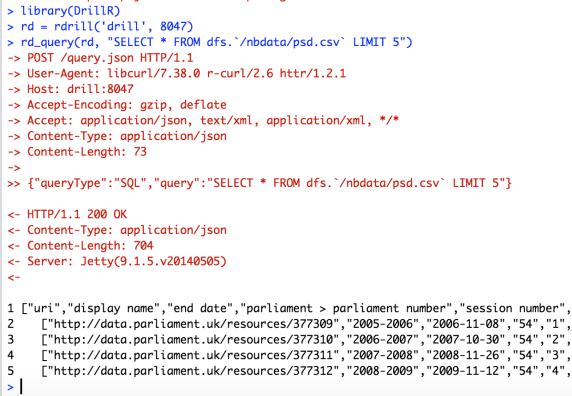 So , getting up and running with Apache Drill and a data analysis environment is not that hard at all, if you have docker installed:-)

PS 8-9/18 – Seems like sergeant has moved on somewhat (Updates to the sergeant (Apache Drill connector) Package & a look at Apache Drill 1.14.0 release) and now lets you make calls from R into Apache Drill running in a disposably launched container: Driving Drill Dynamically with Docker and Updating Storage Configurations On-the-fly with sergeant. See also this Using Apache Drill with R cookbook.